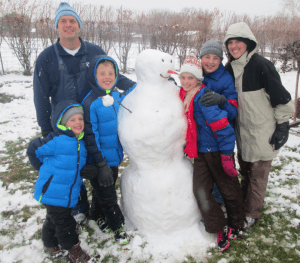 The holiday season seems to amplify all that is good in our lives.

We just returned from a visit to my husband’s side of the family, and our time was filled with playing in the snow, talking around the fireplace, singing carols in harmony, opening brightly-wrapped packages, and eating hot turkey soup and freshly-baked potato rolls (one of my mother-in-law’s specialties).

The other night, we walked the canals around my parents’ home near the ocean and enjoyed cinnamon rolls and hot chocolate with my siblings.  While visiting in the living room in the home where I grew up, I snapped photos of the little things I remember about Christmas:

The angel on top of the tree that my sister made in kindergarten, 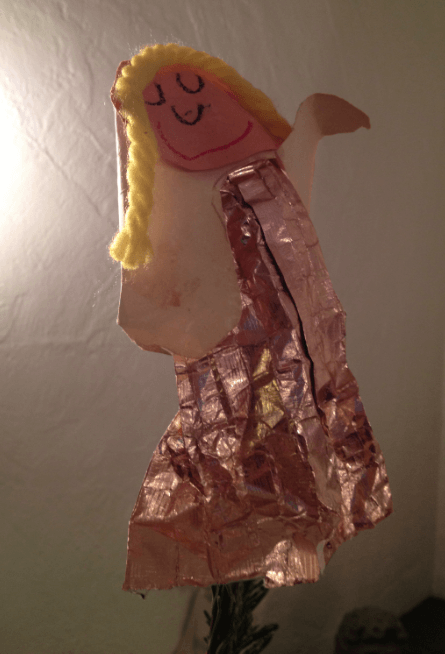 the nativity I used to play with for hours (with a shepherd taped together and a donkey with only two legs), 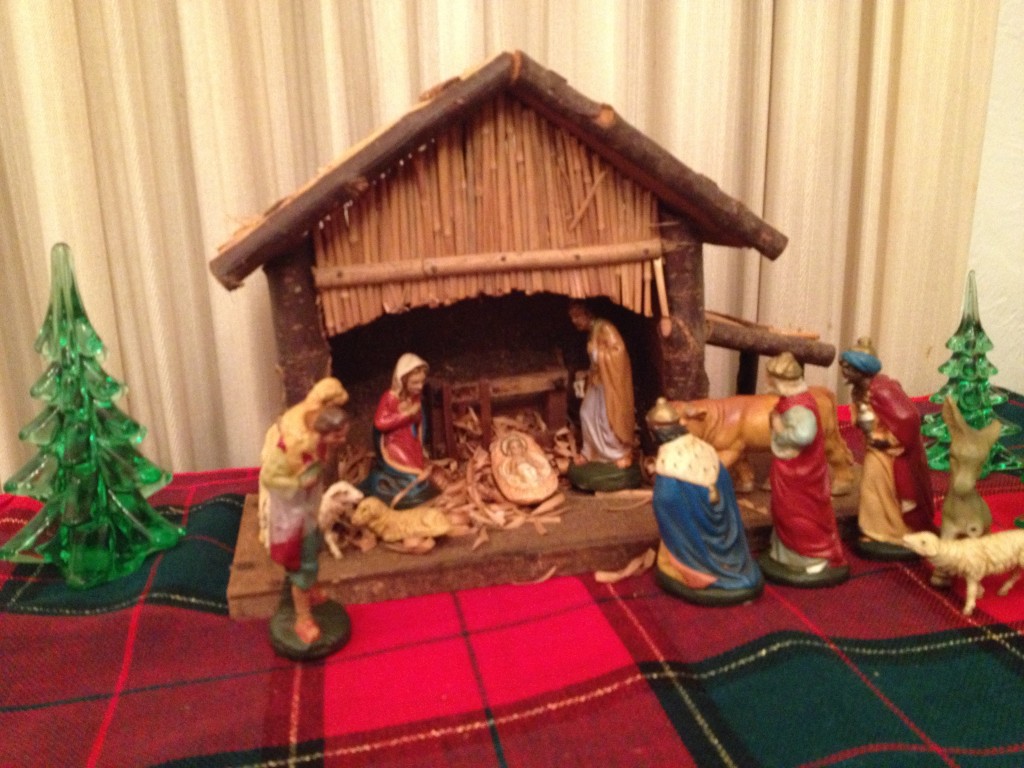 and the star-shaped ornament with my photo from a neighborhood bicycle parade, taken on the fourth of July when I was three. 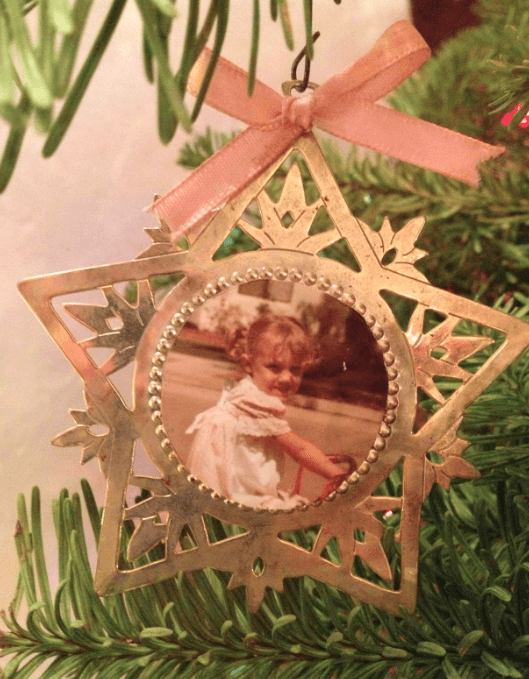 Right now, my daughter is playing “O, Holy Night” on the piano and singing along with her sweet soprano voice.  Our home smells like oranges and cinnamon (a friend dropped by a lovely package of spices that are simmering on the stove).  The boys are playing Legos on the staircase, and I am curled up in a chair, finishing up this post while my children occasionally wander in to give me a kiss.

But since the world turns on a foundation of opposites, it shouldn’t surprise us that the challenging stuff would also be amplified around the holidays.

If I read the Christmas cards and year-end updates from my friends and family when I’m exhausted, I feel like a haggard, under-achieving, failure of a wife and mother.  (I know these cards aren’t intended to evoke such feelings, and I’m kind of embarrassed to admit that I feel this way at all, but it just depends on the time of day that I open my mail.)

Our family eats at least five times as many cookies in the month of December as any other month (they keep coming through the door on lovely plates, and it’s hard to resist!), so of course we’re not feeling like the most healthy, in-shape bunch of people.

And every family I know, at one time or another, experiences family miscommunications, struggling children, financial pressure, illness, and discouragement (you know what I’m talking about).  These issues aren’t typically reported in the Christmas cards, but during this time of the year, when there are more opportunities to interact with a variety of people, plan how we want the new year to be better, and reflect on our vulnerabilities (and successes), it’s very common to wonder just how effective and influential our lives have been.

One of my very favorite Christmas movies is “It’s a Wonderful Life.” It’s the story of George Bailey, the admirable, selfless, handsome hero of Bedford Falls, who, after falling on hard times and living a life that never quite reached his expectations, considers bringing it all to an end on Christmas Eve (because, as evidenced by his insurance policy and bank account, he’s worth more dead than alive).  Fortunately, an angel named Clarence interrupts George’s ill-fated attempt and shows him how much the world would have missed him had he never been born.

George is given the gift of seeing, first hand, how his choices blessed the lives of those in his town–and how, without that life, he never would have had the chance to marry his wife . . . or become the father to his beautiful children.

This movie has become a classic because all of us can see a little bit of ourselves in George.  Every single person in the world has discouraging moments.  (No, you’re not alone.)

We think of the tree house we’ve never built–either due to lack of time, lack of space, or lack of a tree on which to build it. We dream about the family vacations that have yet to happen or the lofty goal of being a really great mom that seems to fizzle every night when we are so tired and cranky that we just want everyone to go to bed.

This year, in particular, our hearts go out to the families who lost their children and loved ones in the Connecticut school shooting–and to the families who continue to suffer worldwide due to war, poverty, or any of the other ailments that plague our society.  Sometimes we wonder what on earth this world is coming to.

There are a flurry of emotions running through us right about now, don’t you think?

But what is so great about this season is the feeling of hope that permeates each aspect of the good and the hard.

We might not have a Clarence to sit by our side and let us see our influence, but our influence is always happening.  And we simply can’t afford to ever question how far that influence is going to reach.

We are mothers.  We help to create the settings in which our children’s most precious memories will be formed. We sustain and nurture life every single day.  That is magnificent.  That is the work of heroes.

The third and fourth verses of “I Heard the Bells on Christmas Day” have been repeating in my mind all week:

I was particularly struck by this third verse shortly after receiving news of the Newtown tragedy:

But then this fourth verse fills me with the sweetest sense of power and hope:

Then pealed the bells more loud and deep:
“God is not dead, nor doth he sleep;
The wrong shall fail, the right prevail,
With peace on earth, good will to men.”

This holiday season, I extend my deepest love to those in our online community.  I have zero doubts that much of God’s work is done through through you, the mothers.

And over the past five years, as I’ve worked with Power of Moms and interacted with so many of you in person and online, I’ve come to the conclusion that these paths we’re traveling, while certainly unique, are very much the same.

Our lives are beautiful, but they’re not easy.  And though I don’t think there’s any one of us who “has it all” right now (or who ever will have “everything” all at once),  we have the privilege of uniting our efforts to raise this next generation of leaders that can far surpass our greatest expectations.

So whether you’re enjoying a moment where all the good is amplified–or whether you’re wading deep in the “hard,” I invite you to let the power and hope of this season reach all the way to your heart–and help you to see how much your influence matters. You are wonderful.

QUESTION: Have you noticed how both the good and the hard are amplified during this season?  What’s happening in your life?

CHALLENGE: Take a few moments during the day today to really think about the beauty of the life around you.  And when hard moments come (which they will), remember that you have the ability to influence everything around you for the better.