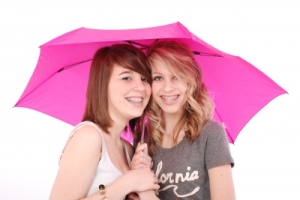 You know that annoying song? We sing it to my oldest daughter, Cope, every now and then because it’s so funny and awful.  She always exclaims, “Mom!  Dad!” and then we all laugh.

She’s so excited to grow up.  And I keep chanting,  Slow down, slow down…

The other day, Cope had her 11-year-old doctor’s physical for school. As my oldest child, Cope is the one constantly breaking new ground for our family, and for me as her mother.  Right off, this physical was different. As usual, I was handed many forms to fill out. But, the last sheet of paper was a written statement about teens having the choice to go into the doctor’s appointment by themselves if they want.  The form said that “teens” had a right to go in alone, and the parent would only be allowed into the appointment by invitation from the child.

“You want me to go in with you, right?” I asked, wondering how age 11 was suddenly considered “teen.”  Her eyebrows came together in confusion. “Yeah,” she said, like it was obvious.  Good, I thought.  ‘Cause I’m going in.

They called her name, and while I gathered Cope’s sleeping three-year-old sister, Paige, I heard the nurse say, “It’s really your choice.”  Cope responded, “Oh, my mom wants to come,” and I got this look – like I was being pushy or something.

Chagrined. Taken aback. I really don’t think of myself as the pushy type. There was only one time I wrote a letter requesting a teacher for my children at school. One time!  I’ve never interfered or yelled at a coach.  I really don’t like to meddle.  I know there are times to step in, but most of the time I think that my children just have to learn for themselves – even if it’s hard or unfair.

“We’re approaching the teenage years,” the doctor said.  “Puberty.” I hate that word.  It’s so yucky. But the whole time my daughter was grinning from ear to ear. I might not be ready, but she can’t wait. Her excitement is so obvious.  (And this is probably the last time I can write about that subject without her disowning me.)

She had an eye test and she needs glasses now. The theory that “eyes will adjust on their own without the correction of glasses… glasses may make eyes lazy too early on,” was not proven. So much for that theory. Neglectful mother, the nurse joked.  Hmf.

When we finally left, Cope was grinning from ear to ear from the grand news that she is indeed getting older – puberty and glasses!  I held the sleeping Paige, who felt just like Cope used to feel in my arms when she was three.  That wasn’t so long ago.  It was like, yesterday.

Suddenly, as if I didn’t know it before, I knew it then: Children grow up. They don’t stay little.  It isn’t hard for them.  It’s fun and exciting, this unchartered territory. Though it is sometimes hard to witness, I want to be right there with them, jumping into each new stage with just as much excitement.  Even if it means watching the inevitable joy, hurt, and disappointment all rolled into their one life. That’s what makes life so good.  It is exciting.  Even if it is also bittersweet.

Cope smiled and declared it, “The best doctor’s appointment EVER!”  I laughed, then wondered if that was the last appointment she’d let me accompany her to. I felt like crying. Because she will grow up.  I will be happy for her. But, there’s that piece of me that will always see her just as she is now, just as she once was.  Eleven.  Eight.  Five.  Three.  Sleeping on my lap.

She’ll always be that little girl to me.

QUESTION: How can we celebrate those special growing up moments with our children while not letting them get ahead of themselves too quickly?
CHALLENGE: Find some time to look at a photo album with your child and enjoy talking about all the many things he/she has accomplished thus far in their lives.

Amy Makechnie is a writer and mother to a wily flock of children. She blogs at maisymak .