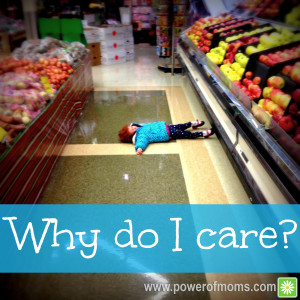 I have used the Love and Logic parenting philosophy since my oldest daughter was a baby. I loved it so much I even became a facilitator a couple years ago.

Kate, my oldest, responded immediately to the techniques. She was about two-and-a-half years old the first time she refused to help clean up, and I had to be the one to “clean up” by putting her toys in a closet for a couple of days. The next time I said, “Are you going to clean up or should I?” she cleaned right up. And we never had that problem again.

My next daughter, Anna, still needs me to “clean up” every couple of months as a reminder. Luke, next in line, is more like Kate, but my youngest, Ally… raising Ally has been a whole new ball game.

Our latest challenge with Ally is her tantrums. Last Thursday was tough. In the checkout line at a craft store, Ally wanted some candy. I told her we weren’t going to buy candy but she could have a sucker after lunch. Despite this concession, she threw herself flat on her back, arms flailing, and began crying and screaming.

It’s always been my approach to ignore these outbursts. I’m obviously not going to give in, and nothing good has ever come of trying to reason with a tantruming child. Ignoring worked well to extinguish tantrums in my older two girls. Still, as we stood in the line, my face flushed as it seemed everyone in the entire store noticed our situation. I listened to two older women behind me giving each other a play-by-play of Ally’s meltdown.

After I finished checking out, I took my bag, and told Ally, “It’s time to go to the car.” She didn’t move. I pretended Luke and I were leaving. I saw her eyes following us, so I took Luke’s hand and began to pull him out of her sight. She still didn’t budge. I peeked up around a display of coloring books, just so the women we were entertaining knew I was still there. Finally, I went and scooped Ally up. The older women started laughing and one said, “Well, the little girl won that one!” I shook with embarrassment as I carried Ally to the car.

After this we still had to go to the pharmacy for medicine. I’d told Luke and Ally they could buy some nuts for a snack. I asked if they wanted mixed nuts or peanuts. Luke picked out some peanuts. Ally saw some cookies and said she wanted them. Of course, Luke did too. I said, “Your choices are mixed nuts or peanuts.” Ally said cookies. I said, “Do you want nuts or nothing?” She again said cookies, so we began to check out. Ally crumbled to the ground, crying about cookies.

I went through my transaction, trying to appear like I was ignoring Ally and like I wasn’t worried about what the checkout lady thought about me ignoring Ally. I grabbed my bag and Luke’s hand and turned around for Ally only to find that she had expressed her displeasure by removing her clothes. And she was quick. Her coat, mittens, hat, shoes, and socks all lay in a heap beside her and she was working her way out of her shirt.

I have to remember it’s long term, this whole raising-kids adventure. I’ve seen how kids turn out when they are allowed to always get their way. I believe that I’m doing it right, but it’s not always easy. It’s the hardest out in public when I feel like I’m on display.

Today at the grocery store, Ally tried to grab an apple and eat it. I told her she could have it right after we paid for it, so Ally threw herself flat on her back in the produce aisle. “Let’s finish up quickly so you can eat that apple,” I said to her, taking Luke’s hand to keep walking. She didn’t budge. I saw the two workers come over to watch the show. Another one walked by and commented, “Mmm mmm—she’s not happy.”  I was terribly embarrassed.

Suddenly I wondered, “Why do I care?” First of all, I probably won’t see these people again in my life. And even if I do, why do I care so much what they think? And why do I automatically assume they’re thinking the worst? Some might be thinking, “That poor mom,” or even, “Good for her!” Really most of them probably don’t even care; they have their own things to deal with. And if a few actually are thinking poorly of me, why do I care?!  The most important thing is that I’m raising my kids the way I think is right.

I heard a speaker at a parenting conference say, “Every good fit our kids throw when they are small is one less fit they’ll have when they’re teens, when the stakes are so much higher.” I like to think of it like every child is born with a certain number of temper tantrums. We’ve all seen adults who become dramatic when things don’t go their way or teenagers who rebel when they don’t get their way.

I’m hoping Ally, though she may have been born with a lot of tantrums, gets most of them out now. It’s always better that they learn the lessons of life when they’re younger.  Better for them, that is, not always for us. But I guess that’s all part of the job of parenting.

QUESTION: Have you avoided working on something—a child’s behavior, a faulty family system, or something else—because it’s easier than trying to change it?

CHALLENGE:  Be more deliberate this week with your parenting–choose something to work on and leave us a comment below to let us know how it’s going.

Edited by Amanda Lewis and Rachel Nielson.
Image from Kristal Melbye with graphics by Julie Finlayson.
Originally posted on March 19, 2015.