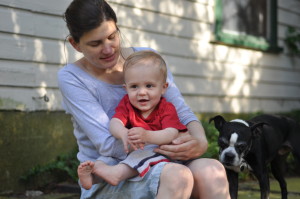 Before my son was born, I thought that preparation would be the key to parenting. I read lots of books and made assessments based on what I observed from my friends’ parenting challenges. I thought it was lucky that I would be on the “older” side when I became a mother because it gave me a chance to learn from the mistakes of my siblings and friends.

What I hadn’t counted on was that parenting throws curve balls and that all the parenting books in the world aren’t going to help you figure out your own style as a parent.

During my pregnancy, I planned on a natural childbirth and thoroughly researched birth options. I hired a doula as a birthing coach, made a birth plan, and practiced breathing and birthing exercises religiously for months before my due date.

A few hours into labor, however, I begged for an epidural and refused to do any of the breathing or labor exercises that I had practiced. Near the end of labor, I was rushed into the operating room for an emergency C-section after my son’s heart rate dropped. I had never even considered the possibility that I would have a difficult delivery and recovery, but what I had not planned for turned out to be my reality.

From there, my plans for parenting continued to crumble. I’d planned to breastfeed for a year after my son was born. During pregnancy, I took a breastfeeding class and bought breast pumps and all of the equipment, books, and clothing that I thought I would need.

But after the first few weeks of his life, my son developed colic, and we discovered that he had a severe milk and soy allergy.  With input from a pediatric gastroenterologist, I chose to start feeding him hypoallergenic formula. I felt tremendous guilt because, again, I had broken one of my parenting vows.

Next, I planned to develop good sleep habits and routines for my newborn so that “cry it out” or other more drastic sleep training techniques would never be necessary.  Before my son was born, I read about infant sleep patterns and methods for assisting babies to learn how to sleep through the night.

Despite my planning (are you noticing a pattern here yet?), by the time he was four months old, my son was still waking up every two hours.  He had no sleep routine, despite our continuous efforts to help him develop them.  He was miserable and we were miserable.  We eventually hired a sleep consultant, and after several rounds of sleep training, my son became a happier, healthier baby.

I could go on and on, citing other examples from my son’s first year and a half.  It was all the same pattern, and it took me many months to figure it out: I would develop a plan for how I would parent, based on research and experts, and then our situation or my son’s personality (or mine) wouldn’t work with my “plan.”  I’d be disappointed and feel guilty for not parenting in the “right” way.

He is now almost two.  I realized the other day that I haven’t picked up a parenting book for a long time.  During the last few weeks, my son developed problems with his napping, often refusing to nap, but it didn’t occur to me to consult an “expert.”  Instead, I relied on my own intuition about what has worked in the past and my son’s temperament.

Reflecting on this, I’ve realized that all of my experiences in “failure” as a parent have actually helped me to become a better parent.  What is often missing in all the debates about parenting styles and research is the key ingredient to good parenting:  flexibility.

No matter what you think your parenting style will be or is, just know that life doesn’t always work out exactly as you plan.  Kids respond to different approaches.  You may want to co-sleep more than anything in the world, but your kid may hate it, or you may not be able to sleep well, or your spouse may hate it.  You may believe breastfeeding is always best, but you might have trouble and decide that it’s not working for your family.  Be open to the possibilities: for me now, that’s what “good” parenting is.

QUESTION:  How have you adapted your parenting style to fit your children’s and your needs?

CHALLENGE:  Be flexible in your parenting approach. Use your instinct, rather than relying only on what experts say to help you make decisions for your child.

Jessica Smock is a freelance writer who lives in Buffalo, New York with her husband and toddler son. After a career in education and research, Jessica earned her doctorate in educational policy last spring. She blogs about parenting and books at her blog, School of Smock
. She is the editor, along with Stephanie Sprenger, of The HerStories Project: Women Explore the Joy, Pain, and Power of Female Friendship
, which was published in December.