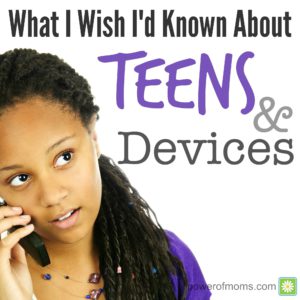 Parenting in the age of electronic devices is new and uncharted territory for many of us. Our teen-aged daughters saved their money and paid for half the cost of their iPad Minis a few years ago. Because owning devices was new at the time, I was naïve as to what could go wrong or what parameters I should set up.

After the fact it was very difficult to backtrack and take away electronic privileges. If I could do it again, I would set up the following standards and constraints from the very beginning.

Another instance where I realized I needed to pay closer attention came when I found out that my daughter was following a popular fashion magazine on Instagram, seeing and learning some inappropriate things. I have very strong feelings about the dangers of fashion magazines (air brushing, body image distortion, adult content, etc.) and the possible effects on my daughters.  It dawned on me that through Instagram and similar social media, you can have access to any magazine, group, or product imaginable. I needed to be aware of which ones my daughter was subscribing to. I definitely control what print media comes in my home, but I was not controlling the digital media reaching my daughters.

Over the years I have learned a lot about monitoring my children’s use of devices. If I had set up the necessary parameters early on we could have avoided some frustrations and problems. Preemptive strategies like these are what deliberate motherhood is all about. Instead of letting the tides of social trends and technology control us, we can decide upfront if and how we will participate.

QUESTION: What restrictions have you implemented with your teens’ device use and how have your teens responded?