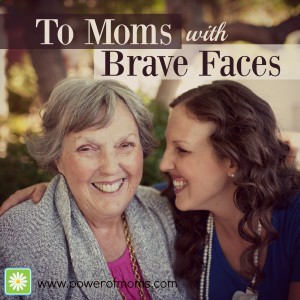 I’ve noticed something that happens often to the people I love: They suffer something deep and very personal. So personal, in fact, that they can’t discuss it with anyone but maybe a few of their closest friends. Sometimes — even if they can discuss it — the challenge lasts so long and involves so many painful emotions that bringing it up over and over again just isn’t socially acceptable.

So they chalk it up as “one of those things I have to get through,” or they tell themselves, “This is just life,” and then they put on brave faces while they endure the difficult days — and sometimes sleepless nights — alone.

Let me give you some examples.

I have a friend who has been fearlessly starting a new business — not because she wants to but because her husband’s health took a major turn for the worse, and she is now the full-time provider and caregiver for her family.

Another friend is in the middle of a seemingly endless string of court dates, trying to get custody of her child from an emotionally abusive spouse.

Others are struggling with financial ruin, mental illness, betrayal and addictions that put an incredible strain on their family relationships.

One friend of mine, whose child with special needs was slowly coming to the end of her life, shared that she walked through the store one day — wearing sweats, not having showered for days, because she was sitting by the bedside of her dying daughter. She noted that everyone seemed so normal around her, just going about their days, buying dish detergent and paper towels, and she felt like calling out, “Do you see me? Do you know what I am going through? I am not OK!”

There are dozens more examples I could give here, but I think you get the point. More often than not, the people around us, those we love and those we don’t love yet, are wearing brave faces. It’s likely that you’re doing the same in at least one aspect of your life right now.

I want to share what my mom would have said to you if you came over to our house and sat by her on the couch and poured out your heart. This was her specialty.

First, she would have listened. She would have asked you to tell her all about it. She would have let you share every detail, without ever looking bored or nonverbally suggesting you get to the point. I know this because that’s what she did for me and my siblings and her friends who would drop by and her friends who would call her on the phone. I remember resting next to her on her bed for what seemed like hours while she held the phone to her ear, simply saying, at just the right times, in a totally compassionate voice, “Oh, I see,” or “I’m sorry,” or “Yes, that must have been awful.”

When I was younger, I would whisper, “Will you please get off the phone?” and she would hold up one finger to her lips, as if to say, “Shhh.” But as I got older, I would just snuggle up to her so she would put her arm around me and wait patiently until the call finished. It was like watching a surgeon perform a life-saving operation. Each call was Mom healing a heart.

After listening to your story, she would have told you exactly what you needed to hear — which would obviously vary according to your specific challenge — but if someone had hurt you, she would have said, “They had no right to do that to you. I’m so sorry for them that they think they need to treat other people that way. You deserve better than that.” Then she would always say, “You need to keep doing what you know is right, and if that person who hurt you wants to continue acting that way, that’s their SDB.” (SBD stands for “self-defeating behaviors.” She read a book about those once and then made sure we understood what they were.)

If you were going through a sickness or physical pain, she would say, “That is so difficult. I am sorry you are in so much pain. You know, God has to give you challenges so that you can grow. And since you’re such a strong person, and he knows you can handle so much, he gave you this. He had to think of something that would be hard for you!” Then she would add, with all sincerity, “If it were possible, I would ask God to give that pain to me so I could carry it for you.” Honestly, I know she would have followed through.

If you simply made a mistake, did something foolish that you totally regretted, she would have put her arm around you and said, “There, there. Think of all the good things that you do. You don’t need to worry about this anymore. You can make things right again, and think of all that you’ve learned now.”

And if you were scared — because the challenge required you to step up and do something totally outside your comfort zone — she would have said, “If anyone in the world can do this, it’s you. This is what you were made for. This is who you are. People need you, and you are going to get through this with flying colors!”

Then she’d usually add something like, “I’m proud of you. I know this isn’t easy, but look, you’re doing it!”

As I’m writing this, my mind is flashing back to countless phone calls from my college dorm room and countless mother-daughter counseling sessions at the kitchen table or while sitting on her bed or while eating frozen yogurt in a warm car. It was such a natural process of my life.

But there’s another brave face I need to include here: The one my mother wore as her Alzheimer’s was settling in. She knew something wasn’t right. She heard my dad whispering his concerns to me one afternoon, and, once he left the room, she said in a frustrated voice, “What was he telling you? Did he say I’m losing my memory? Because I am just fine. I may be missing some details, but I haven’t totally lost my marbles.”

Those months and years were the hardest. We all knew something wasn’t right, but we didn’t know how to help her. One afternoon, my sister Laura sat with Mom in the car parked in front of the house and started the conversation, “Mom, we think that you are losing your memory.”

Laura replied as gently as she could, “Mom, we’ve actually had this same conversation before.”

I can’t even imagine what was happening inside my mother’s head as she realized what was taking place. That transition time was heartbreaking because life, as she knew it, was falling apart. For example, she couldn’t remember when she had last showered or washed her clothes, and if one of us offered to help her into the shower, she would completely shut down, like a toddler having a battle of wills with a parent.

One day, she called our friend three times to RSVP to a baby shower: “Hello, Sarah! Thank you so much for the invitation to the shower. I would love to attend, and I would like to contribute to the group gift!”

“Did she ever make it or contribute to the group gift?” I asked Sarah in a later conversation.

“Oh, no,” Sarah responded with a compassionate smile, “but I know she had every intention of doing so. I mean, she called three times, bless her heart.”

I remember another night when she got upset with my dad because he wouldn’t let her go teach a shorthand class that ended more than 40 years ago. My daughter Alia and I couldn’t calm her, so I sat by Mom while Alia made a phone call from the other room. In her best school administrator voice, Alia reassured her that the class had actually been canceled that night, but the school appreciated her work as a teacher, and they would be sure to call her if another opportunity came up. That finally settled her.

Now, she doesn’t worry about anything, and she doesn’t know who I am, so the brave faces have started shifting to us — her children, her husband and her loved ones.

During this heartbreaking time, as I am slowly losing my mother, I try to honor her by being like her, by taking the time to love individuals and be a listening ear for those who are putting on a brave face. This is why I am writing today, to make sure that the mothers out there who are struggling know that they are not alone.

Although our challenges are all unique, wearing a brave face isn’t easy. It’s necessary, and it’s a sign of maturity, and there’s undoubtedly a lot of growth going on behind it, but because you are probably wearing that face more often than not, I thought it would be helpful to share some of my mom’s advice with you today: You’re going to get through this. And you are not alone. And I, for one, am very, very proud of you.

QUESTION: Are you wearing a brave face? What are the comforting words you need to hear?

CHALLENGE: Take a moment to record the best advice you’ve received, or perhaps record one of the ideas in this article that resonated with you. Keep this in a place where you can refer to it as needed.

April Perry published a book of stories and lessons from the life of her remarkable, compassionate mother.

Listen to April discuss this topic in this podcast.