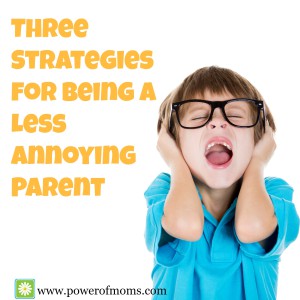 I recently had to face a harsh but true reality: I am an annoying parent.

My ten-month-old daughter is too young to be bugged by me (yet), but my three-year-old son, Noah, could certainly testify that I can be annoying to be around. Allow me to illustrate with an example:

Before I potty-trained Noah, I read about a strategy called “Potty Boot Camp” where you put the child on the potty every 10 minutes throughout the day so he/she eventually goes in the toilet. Within the first day, the child has learned what it feels like to use the potty and has experienced success.

This sounds like a smart idea, and I hear that it works wonders with some children, but I had a different experience with my strong-willed son.

He did really well for the first day or two (and of course I started to lengthen the time between potty breaks), but when the third day rolled around, Noah started waging World War III at the mere mention of the toilet.

I was so frustrated. He knew how to do this! Why was he defying me? Why wouldn’t he just respond to the timer and go give it a try??

And then I thought about it from Noah’s point-of-view: What if I had someone stopping me in the middle of my play or work every twenty minutes, ringing a loud buzzer and insisting that I go sit on the toilet to “try,” even when I didn’t need to?

With this realization came another: Kids are just little grown-ups. Like us, they have opinions and personalities. Like us, they get bugged and resistant when people interrupt them, nag them, coerce them, or boss them around.

Obviously this doesn’t mean that we never potty train our children, never enforce bedtime, and never expect them to help us clean the house; but when we are willing to consider the personalities and preferences of our children—yes, even our little children– seek their input, compromise at times, and treat them with the respect that we hope to be treated with, I am convinced that our children will actually listen better.

I don’t plan on giving up being annoying altogether (parents just have to boss and coerce their children at times), but since that fateful Potty Boot Camp, I have learned that I can be a much more pleasant parent if I simply tweak the delivery of my expectations. Here are three strategies I use:

My son is extremely strong-willed, and he does not like being bossed. Even though I know this about his personality, when I take a step back to analyze how I talk to him throughout the day, I realize that I am almost always ordering him around:

It’s no wonder he sometimes throws a fit or tunes me out!

I’ve found that I can still get my son to do what he needs to do by rewording my demands as choices. For example, instead of barking, “Put on your shoes!” I can ask, “Which shoes would you like to wear today?”

This small change in phrasing has dramatically reduced my son’s tantrums and my subsequent frustration. He doesn’t think to fight me about wearing shoes because he doesn’t even notice that I am insisting on it. Sneaky, huh?

It’s not always possible to rephrase a demand as a choice (“Would you like to sit in your carseat or sit in your….uh….carseat?”), but sometimes I can distract Noah from the task at hand by offering him a choice about something else. So as he enters the car, I might ask, “What song do you want to listen to first?” as I pat his carseat and gently direct him toward it.

The less I use my words to boss, the more cooperative my son seems to be.

One cold November morning, I told Noah to grab a coat as he headed out the door to preschool. (Apparently I hadn’t learned strategy #1 yet.) He insisted that he didn’t need one, and I was tempted to argue with him but decided to wait. “Okay,” I said, shrugging.

He opened the door, took two steps outside, and paused, clearly registering that it was 30 degrees fahrenheit. “Mom, I think I need a coat!” he said, running back into the house to grab one.

Since that moment, I’ve tried to live by a principle that I call “let him feel the cold.” This doesn’t only apply to weather situations but rather to any situation where I can let my son learn through his own experiences rather than from my nagging.

A lot of battles with Noah can be completely avoided if I am simply playful in the way that I ask for his compliance.

If I want Noah to stop playing and help me clean up, I sometimes talk to the toys and ask them for assistance. “Monster Truck, do you think you could help Noah pick up these toys?” and then we vroom around the room grabbing toys and putting them where they go.

When my husband helps Noah brush his teeth at night, he sometimes enlists the help of a giant stuffed snake who plays devil’s advocate and encourages Noah not to brush. (Apparently Noah enjoys defying bossy stuffed animals in addition to bossy parents.)

These games do not have to be elaborate. They do not require a lot of forethought or a fancy prize at the end. All that is required is a little bit of creativity and silliness in the moment.

After our disastrous third day of “Potty Boot Camp,” I decided to take a break from my nagging and allowed Noah to take a lead in dictating his own bathroom habits. The Boot Camp had taught him the skills; now it was time for me to give him some space.

He went back to diapers for a little while, and then, sure enough, he told me he wanted to be a “big boy” and has rarely had an accident since.

The lesson that I learned from this experience was not about which method of potty-training works best. (Every parent will do that lovely task differently.) The lesson I learned was to try to see things from Noah’s perspective more often—to remember that he is a mini adult, and, when possible, avoid my annoying habits of bossing, harping, and demanding.

I don’t plan to become a permissive mother who lets him do whatever he wants just to avoid a fight. And I’m sure Noah will always consider me a nag (what mother isn’t?). But I have found that when I tweak the delivery of my expectations—by wording commands as choices, letting my son “feel the cold,” and infusing playfulness into my demands—I am much more pleasant to be around, I enjoy parenting more, and I have far fewer battles with my strong-willed son.

QUESTION: What strategies do you use to be “less annoying” and to help your children obey more willingly?

CHALLENGE: This week, notice when you are being bossy, naggy, or demanding, and try to rephrase your expectations in a way that is more compatible with your child’s unique and emerging personality.

Edited by Sarah Monson.
Image from Shutterstock with graphics by Anna Jenkins.

Rachel loves birthday surprises, summer sunsets, and a handsome man named Ryan. She taught high school English for five years before deciding to be a stay-at-home mom to their two miracle babies: Noah, who was adopted, and Sally, who was conceived via IVF. Rachel hosts a weekly podcast for mothers called 3 in 30 Takeaways for Moms. Each 30-minute episode includes three doable takeaways for parents to try in their homes that week. She would love to connect with you on Instagram: @3in30podcast.