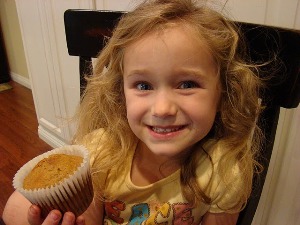 Image from A Day In The Life

I just thought it was cute at first.  First, she poured some milk into a bowl. Then she asked me to get her two eggs, and she got a little help from her older brother to get them cracked open.  Next, I saw her putting chunks of banana on top of the milk and eggs.  “Oh well,” I thought, “milk, eggs and banana are pretty cheap.  It’s worth it to let her experiment while having fun in the kitchen next to me.”  I lost track of what was going into her concoction after that, focusing instead on the little flaps of potato peel my son was dropping all over the floor as he helped me peel potatoes.

At one point I had to ask her to get off the counter, and I handed her the baking soda she was after, telling her not to use too much.  The next thing I knew, she was putting liners into a muffin tin and asking her older sister to help her pour the batter.  Now I started to get curious.  I looked into her bowl and saw what looked like legitimate banana muffin batter.  “Did you add oil?” I asked.  She hadn’t.  I told her to add about a half a cup, but whether or not she actually measured it I’ll never know.  (All four of my children were in the kitchen while I was making our favorite family dinner, Japanese curry, so there were a lot of things slipping through the cracks!)  All I know is I put the muffin tin into the oven and set the timer for about 15 minutes.

Thinking this would be a great object lesson, I was already formulating a little speech in my head about following recipes and directions when the timer went off.  Elizabeth was so confident of her creation, she could hardly wait for me to put on my oven mitts. Much to my surprise, the muffins looked as good as the made-from-a-recipe variety.  What in the world would they taste like?

There would be no lesson on following recipes and directions.  Elizabeth couldn’t have been prouder, and I couldn’t have been more amazed when I tasted her ever-so-slightly over salted (I think it was the baking soda), but pretty darn good chocolate chip banana muffins!  She’s five for crying out loud!

Maybe it was pure luck, but I think she was able to pull that off because she has helped me make chocolate chip banana muffins dozens of times.  What I realized yesterday is that our children are always watching us. Closely.  For better or for worse, they will mimic our behavior, our language, our choice of entertainment, our decisions, everything.  And we’d better make sure we are worth emulating.

A lifetime of desserts depends on it.

QUESTION:  What have your kids been watching YOU do lately?

CHALLENGE:  Be aware of what you say and do because you might just see it played out in Family Theatre!