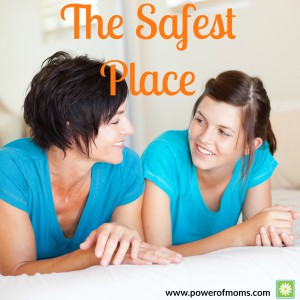 I told him I’d be up to sing him a goodnight song in a minute, all the while holding my breath and waiting for the rejection. He’s almost ten, you know.  No longer is he the little boy waiting with his Woody doll for a story and a song.

He smiled and ran upstairs. A few minutes later, he called down to see if I was coming. Another year and he still wants me to sing him a goodnight song. 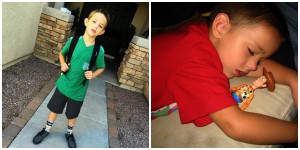 I climbed the stairs, but on my way to his bed, I stopped at our new junior high schooler’s door. Should I ask? I paused at the door and hesitated, not sure if I wanted to hear her response. She’s twelve and independent.

Not quite the little girl with a silkie and a thumb hoping for a lullaby. 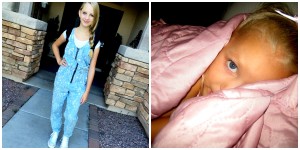 I decided to forego asking, and instead, I reached for the doorknob and walked boldly in. Without breaking my stride, I collapsed on her bed. She was reading but stopped and looked up. I could see that she seemed happy I was there. I turned the light out and without any words began a lullaby. Her lullaby. The song I’d sung to her since she was born. She grabbed my hand and entwined her fingers with mine. In them I felt the affirmation that this was okay–at least for this one night.

When the last note fell into the air, I kissed her goodnight and headed to the next room. He was waiting. One. two. three. FOUR songs later I whispered into his ear that I loved him and would see him in the morning. Instead of hopping up though, I continued to lay in the silence for a moment not wanting to leave. I lay listening to his breathing. I’ve listened to his breathing gradually slow on so many nights and for so many years that I can tell exactly which of his slow and steady exhales is safe. Safe enough to slip my arm out from under him without waking him.  But this night he turned and with eyes still closed whispered, “Mom, do you think before you go that I could tell you about my day?”

“Of course,” I whispered back.

In my mind I replayed an earlier scene right after school where I had asked him how his day was, and he told me it was good. I then handed him a cookie, and we both went on our way. The evening passed and now here we were. I proceeded to quietly listen to little run on sentences featuring things I never knew about him. Details I would only find out between the lines and weaved throughout the tales of a nine-year-old’s school day. I learned that he shot the final basketball at recess and watched it swoosh through the net as he ran to get in line. I learned the name of every boy he played basketball with that day, that he likes his brown hi-tops best because they are more comfy than his gray shoes, and that he prefers his hair without wax because he likes it soft.

I learned that sometimes little boys are too tired and hungry after school to tell you about their day, but that they still want to tell you. Sometimes they just need a song first to know that they have your full attention. I learned that children feel safe when they have a mom with no phone to check, no dinner to make, no siblings to interrupt. Just a mom, a dark room, and a song. That’s when they know it’s safe. That’s when they can be sure that they won’t feel the sting of rejection from an interrupting text or a knock at the front door. That’s when they can finally exhale all of the wanderings of their day and know for sure that they are heard.

I learned today that rejection goes two ways. My rejection looks like busyness and screens, while children are more honest with their rejection. If my kids were ready to move on from bedtime lullabies, they would have just told me, but my rejection is cloaked in pretending. Pretending to listen when I’m not really listening. And that rejection stings the same.

But above all, I learned that you are never too old to hear your mama sing you a lullaby. That it’s one of the safest places in the world. That it’s a quiet place where focus can be both heard and felt.

Today I learned that focus is what cultivates safety and love, while distraction breeds the sting of rejection and insecurity.

Today was a good day for learning.

Tonight was a good evening for safety.

QUESTION: What do the safest places for your children look like? Where and when during the day do your children have your undivided attention?

CHALLENGE: Decide now how you will create a safe place for each of your children tonight–and discover what happens.
Edited by Sarah Monson and Becky Fawcett.
Post images provided by the author.
Feature image from Shutterstock with graphics by Anna Jenkins.