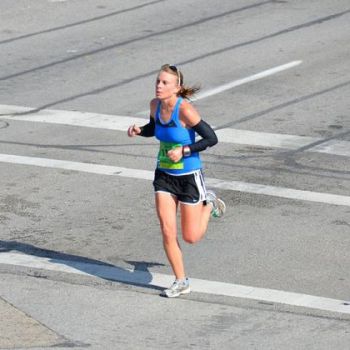 I’m not a marathon runner, even though many of my loved ones are.   But whether we’ve run 26 miles or simply held it together for 26 minutes, I think we can all appreciate this touching story told by Janeen Kiene Wright, the Arizona President of American Mothers who gave the keynote address at our recent Arizona Power of Moms Retreat:

I had trained through intense heat and humidity indexes that were enough to belay even the toughest athletes.  I had tread through the streets of Washington D.C. and Georgetown as the sun rose over the graceful Potomac.  The culmination of months of preparation had arrived: I was a rookie about to attempt the 2002 Baltimore Marathon.

My neighbor, a marathon veteran, gave me some useful advice.  “Be sure to put something on your shirt,” she said, “That way, when the going gets tough, the crowd can cheer for you.”  Crowd?  It hadn’t occurred to me that there would actually be spectators along the route. “Hmm…” I thought.  “What would I put on my shirt?”  How about “Tired” or “Almost Over the Hill?”  This would take some effort.

I wanted a phrase that described my essence.  Ironically, I chose a title I had worked hard to displace as a stereotypical identity.  After all, I graduated form a private university.  I’m a closet journalist and a decent musician.  I volunteer at the local PTA and with my church youth group.  But those titles lacked “oomph,” and at the end of the day, there was only one that really mattered.  Besides, the Baltimore Marathon was touted as the “hilliest race in the country.”  It would be tough, and I needed all the help I could get.

It was done. I snatched a bright yellow paper out of my printer and slipped it into a waterproof jacket. Despite my best efforts to transcend the label, I found myself coming back to the statement that best described my persona. It read, “Mother of 5.”  I pinned it to my shirt.

The race began early.  It was a chilly 41 degrees.  I slipped on gloves and pulled a sweatshirt over my racing tee. For the time being, I was just runner 2493.  After a few miles, it was time to shed the gray jersey and reveal my true identity:  I’m the mother of five beautiful children.

None of us said much those first few miles.  We were all fresh and giddy with adrenalin.  But as the race wore on, fatigue crept onto the scene.  That’s when I heard it first.  I was rounding a corner near mile six when a woman from the street yelled, “Go Mother of Five!”  I grinned,  “It’s working!”

As the race wore on, I was inundated with shouts of praise and encouragement. As I passed fellow runners, I heard, “Way to go Mother of Five!”  or  “Keep it up Mother of Five!”  It must have been around mile 16 that an older couple approached me from behind and uttered,  “Mother of Five, we’re parents of three.  We hope you get a massage tonight.”  That would be nice.

For a moment, I dreamed of my children gathered around my bed with hot oil and towels rubbing my toes.  Then I pictured my daughter Emmy gloating over her kneading ability followed by a swift bop on the noodle from her brother Jake.  Maybe the massage could wait . . ..

The concept of my own personal cheering section was inspiring.  I wanted to bottle the enthusiasm and replay it throughout my daily “long runs.”  As mothers, so many of our greatest achievements go unheralded. I thought about those days I pulled myself out of bed after being up all night with a baby’s ear ache only to find a mess three-year-old Claire had made as she secretly emptied the dishwasher onto the living room floor.  (She was planning a picnic.)  Then there are Emmy’s hair fiascoes enhanced by Jake’s contribution that she looks “totally ugly, dude.”  And what about middle school homework?  (That is, when 13-year-old Rockwell remembers he has some.)

The evolutionary process by which we raise our children is as exacting as any athletic event.  Indeed, every woman engaged in the marathon of motherhood deserves her own cheering section.  Pain had begun to creep into my thighs.  Up ahead was a mile marker.  Ugghh! Where was I? “Mother of five is pooped!” I thought.

It must have shown on my face.  An officer directing traffic along the course called, “Hang in there, Mother of Five!”  It was mile 25.  “Last hill,” I moaned.  By now, the spectators had moved toward the finish line.  The streets were empty.  I would have to make it on my own. Just a few more steps until mile 26 and then the home stretch!  The pain was intense, my body plead for relief.

As I approached the finish line, I recognized the familiar faces I loved so much.  My children were standing with my husband Jack, waving homemade posters.  Their presence eliminated my discomfort.  I reached deep within, just like I had so many times before.  And I began to sprint.

”Come on mom!”  “Go mommy!” they squealed.  As I trotted across the time cushioned sensor, I couldn’t contain my emotion.  I fell into their arms and wept.  As I felt the strength of their embrace, I whispered, “Way to go Mother of Five. Way to go.”  We headed home to begin the hardest part of my day.

I love Janeen’s story for so many reasons, but today I’d like to briefly recognize a few of the cheerleaders who support us in our daily marathons of motherhood.

Nine times out of ten, my inner voice tries to pull me down, but it makes a huge difference when I remember to say things like, “You’re doing great, April!” as I’m running overdue books to the library, while frozen meatballs and canned spaghetti sauce are microwaving for dinner (and I still haven’t showered for the day).

(2) Encouragement from our Children and Spouse

Last week, my daughters decorated the office window with all kinds of sweet notes and pictures. 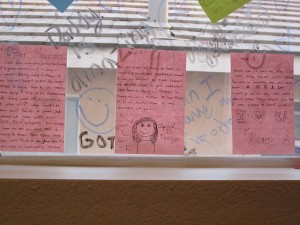 Like you, we have hundreds of handmade cards (that I can’t bear to throw away), and though sometimes the messages might seem a bit redundant, the praise and love  from our children means more than even the nicest blog comments, Facebook messages, or community recognition.  I cherish these tokens of support.

And I know this sadly isn’t the case for every mother, but for those of us who do have spouses who praise and encourage us, do we listen?  Many times, I think, “He’s just saying these nice things because I’m his wife . . ”  But perhaps I should start believing him more often.
(3) Power of Moms

We know that every single day of motherhood requires immense strength and discipline.  That’s why Power of Moms is here–to provide encouragement from our peers who can completely understand how sleep deprivation, budget constraints, and an entire box of chocolate chip cookies threw our day for a loop.  We’re here to cheer each other on and remind ourselves that we can do this.

I can’t finish this post without acknowledging that there’s a Higher Power out there who really wants us to succeed.  Although we might have different perspectives regarding the details of that Power, on the days when our workload requires a sprint (but all we can muster is an intermittent crawl), we must remember that we are never alone in this marathon.

And as we listen to the right voices and run at our very best pace, we will reach each daily finish line with more confidence, peace, and that sweet knowledge that we are succeeding.

QUESTION: What helps you get through your daily marathon of motherhood?

CHALLENGE: When you’re tempted to give in to the pressure and strain of motherhood, turn your focus to one of the cheerleaders in your life.

Editors Note: Portions of article were written by April Perry