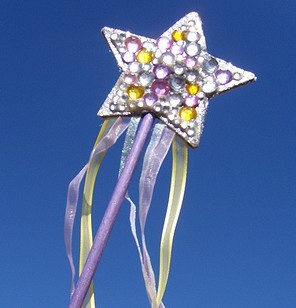 I’m not sure I remember when my magical powers began. It was several years ago, when obviously in an easy going mood, I “abracadabra-ed” and some fruit snacks fell out of my arm sleeve. Right then and there my children were hooked. Since then I have “magic-ed” things like fruit snacks and candy, a package of markers and once, even a new skirt.

One of my favorite “magic-ing” memories was a couple of years ago when my then five-year-old daughter, Ellie, didn’t want to leave the swimming pool. Luckily she had on the best reusable ear plugs so that the water wouldn´t get in her ear. Her whiny response was, “Will you magic something when we get home?” Usually I magic only on my terms, not by request. But to facilitate a much speedier departure from the water, I agreed.

Upon returning home, as I was emptying the bag of wet towels and swimming suits, I heard a little voice, “Mom, you are so magic. You are the best mom in the whole entire world!”

How could I possibly resist that? And then it happened. Doing my best to ignore my discomfort of being cold in my still-wet swimsuit, I began twirling around in the kitchen ‘abracadabra-ing’.

And what do you know? Two fruit roll-ups fell from my shirt.

Smiling, my two young children dove down to scoop them up. Despite the immediate headache from too much twirling, I was thrilled to again hear the little voice declare:”Mom, you are so magic. You are the best mom in the whole entire world!”

This magical power has never really lost it’s charm. Because really, who wouldn’t want a new package of underwear or a spontaneous piece of candy to appear from their mother’s shirt sleeve?

If you are wishing by now that you too had this magical power, I’ll tell you how it is done. It isn’t really magic!! It doesn’t even have to include the words abracadabra. You just need a little spontaneity, a little creative thinking, a little effort, and abracadabra–you’ve brought an element of fun into your day.

Even my almost thirteen-year-old still ‘believes’ in my powers. After all, if you were lamenting the fact you didn’t have any shoes to wear that morning and mom remembered a pair that she ‘put away for a rainy day’ after a great clearance sale, wouldn’t you ‘believe’ too?

Which brings me to why I only magic on my terms and not in response to requests. This little element of ‘fun’ in our family is not based on getting something you want when you want it. It doesn’t work like that at all. The magic is random, it is done on mom’s terms. It is not tied in with rewards, or any family system. It is just a little extra to add to the ordinary. The magical powers take little effort or planning. It is usually nothing more than a small snack that chances are I would have passed out anyway. (Although part of the magic is that it is not something that is in plain view on a pantry shelf.)

I may go weeks between using the powers, but every time I do, the results are the same: smiles all around. (Except if my husband is around–typically, instead of a smile, he gives me skeptical and funny facial expressions instead!)

Watch out for wanting to keep your magical powers to just your family. Your child may try to convince their friend that you really are magic. And so you’ll try your hardest to not disappoint anyone and as you twirl around chanting spells, the neighbor kid will look at you as though you are a complete fool, until they see a handful of Gummi Bears fall from your sleeve. But the look of pride on your child’s face and the look of utter wonder on the friend’s face will make all the foolishness worth it.

The one problem? Recently I was suffering from a very strong craving for chocolate. I was searching high and low in the pantry for any remnants of discarded party favors, or a forgotten piece of hidden chocolate. One of my children asked what I was doing, and when I told them I was searching for some chocolate, my innocent child suggested, “Why don’t you just magic some?”

QUESTION: What are some unique ways you already bring an element of  ‘fun’  into your mothering?

CHALLENGE: Do something small and simple that will bring a smile and even a laugh to your children’s faces.

Tiffany Sowby's passionate dream from childhood-to grow up and be a mother-has come true, as she is now the mother of five children, ranging in age from five to fifteen. Though the realities of motherhood are far from dreamy, Tiffany does her best to keep her passion for motherhood alive by appreciating, recognizing and finding joy in the little things in life.