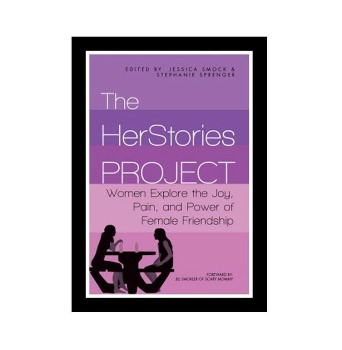 The following article is a collaborative effort from two of our contributing authors: Stephanie Springer and Jessica Smock.

We’re two women who have never met: Stephanie Sprenger of Mommy, For Real and Jessica Smock of School of Smock. Despite the fact that we’ve never been in the same room, we compiled a book of essays called The HerStories Project: Women Explore the Joy, Pain, and Power of Female Friendship, and, in the process, have become close friends.

Our story, as well as the story of how we published our book, is an example of how modern technology and communication can build and strengthen friendships between women. And we’ve learned how these friendships reveal many universal truths. Friendships, no matter the distance, can create strong feelings–feelings of deep joy and connection, as well as pain and betrayal. Thus, friendships have tremendous power in shaping our lives and who we become as women, mothers, and individuals.

Neither of us had any idea when we first exchanged enthusiastic comments on each other’s blogs about our similar taste in books that we would be publishing one together less than a year later. Compiling our book–and building a new working friendship–has given us a renewed appreciation for the importance of friendships between women– friendships which can be deeply intimate and essential to emotional health.

From these women’s stories, we’ve learned powerful lessons about female bonds which we hope can enrich your friendship experiences:

1. Find unique and personal ways to honor your friendship.

One contributor, Minnesota writer Galit Breen, chose letter writing as a way to recognize the contribution her friends made in her life. She writes, “I’ve been missing the chance to tell my friends how I see them. Their goodness and their light, the way they make me feel, that they’re noticed. So this month I’m trying something new. I’m writing letters to five women whose friendship lifts me… I leave myself (mostly) out of the letters, not writing about my thoughts or my memories or my details. Instead, I write what I see in them. The light they offer; the gifts they give. I pen who they are through my eyes.”

2. You may never find your one BFF. Instead, it’s okay to have lots of friends that reflect different parts of your life.

As contributor Elizabeth Aguerre discovered after a lifelong search for a best friend/soulmate, “I have finally discovered that I don’t need one “Best Friend.” I need lots of really fantastic friends. I am no longer disappointed, because I don’t put all my eggs in one basket. I have lots of baskets, and I’m skipping happily around with them on the playground.”

3. Nonetheless, you do not gain more from your friendships by having hundreds of social media contacts.

Social media strategist and contributor Monica Sakala concludes her essay with the realization that, “And in the end, I think as adults, it’s not about quantity but quality. All those people on Facebook pages, Twitter feeds, and from college parties aren’t necessarily real friends. I think most of us just need a few key people.”

4. Finding close friendships gets harder as we get older.

Several of our contributors wrote essays about the need to work to find intimate friendships, particularly during times of transition such as after a divorce or after a child is born. For instance, blogger and writer, Alexandra Rosas writes about the “critical importance of being proactive in creating a social community” during the early years of motherhood: “Friendships, even surface ones in the form of acquaintances, can tide us over during the changes in life, the transitions to a new being, that leave us stripped of who we used to know.”

5. The end of a deep friendship needs to be mourned, and the feelings of loss and pain may be just as strong as the end of a romantic relationship.

Many of our contributors wrote about friendship breakups. One writer and contributor, Anne-Marie Lindsey, suggests, “Breakups are messy and often petty. If there’s actual love in a relationship, it never really goes away. The same is true of friendship… The end of a romantic relationship has a script built into it. When a long friendship ends, all that’s left are people in a mess with no script to follow and too much in common.”

The emotional response to this section of the book about friendship breakups caused us to realize that we wanted to examine this experience of friendship loss further. When we announced a call for submissions and a survey for our next book, My Other Ex: Women’s Stories of Losing and Leaving Friendships, we were overwhelmed by the response and number of submissions. We’re pleased to announce that this book examining the end of friendship from many women’s perspectives will be published this fall.

We feel privileged that 50 women have allowed us to share their stories and experiences with friendship. It was an honor to read their experiences and to recognize ourselves in their words. Many of us can relate to the complexity, the pain, and the lasting impact female friendships have on our lives. The beauty of these essays is that, in spite of our differences, there are so many universal truths to female friendship. While each story is unique and different, we think they will resonate with the women who read them.

QUESTION:   How have friendships shaped your life?

CHALLENGE:   Choose a friend who has helped you get through a difficult time. Write your friend a letter or an e-mail about what your friend’s support has meant to you.

Jessica Smock is a freelance writer who lives in Buffalo, New York with her husband and toddler son. After a career in education and research, Jessica earned her doctorate in educational policy last spring. She blogs about parenting and books at her blog, School of Smock
. She is the editor, along with Stephanie Sprenger, of The HerStories Project: Women Explore the Joy, Pain, and Power of Female Friendship
, which was published in December.