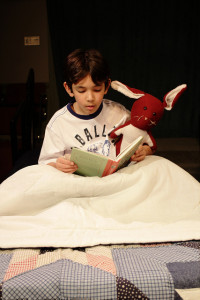 One of my favorite children’s stories is The Velveteen Rabbit. It’s about a toy rabbit given to a young boy one Christmas, who soon discovers that, as a toy, he is not real. The rabbit is told by another toy that in order to be real the boy must come to really love him, and the rabbit decides this is what he wants more than anything.

Soon the rabbit becomes the boy’s favorite toy. One day the boy declares to his nanny, with much emotion, that his rabbit is not a toy, but is real, and the rabbit believes that the ‘magic’ of being real has happened to him. He feels full of love for the boy and is devoted to him completely.

Then, the boy gets very sick with scarlet fever. The rabbit stays faithfully by his side, knowing that the boy needs him. When the boy gets better, however, the nanny has to clean his room of all the scarlet fever germs, and the rabbit is designated as thoroughly contaminated. He soon finds himself on top of a heap of garbage, ready to be collected the next morning. The rabbit is distraught, beside himself with sadness and disbelief, and says to himself, ‘What is the point of becoming real if it all ends like this?’

Fortunately, the story doesn’t end there. Things do turn out right for the velveteen rabbit, but the defining point in the story, for me, is when the rabbit questions why all of the love, sacrifice and trust that he poured into the boy seem to have yielded him nothing in return. He learns, as we often learn as mothers, that the love we give to others doesn’t always materialize into something that we expect, or something that we thought we wanted.

A while ago, my teenager gave me my own velveteen rabbit experience. He made some poor decisions and did something that was very bad. My initial reaction, after coming out of a state of shock, was to wonder what exactly I had done wrong throughout his lifetime that had led him to this action. I had given him all the care and attention that I could: I sang to him, read him stories, breastfed him, took him to the park, kept him away from junk food, limited his time in front of the TV and computer games, was rigorous about the quality of his entertainment, taught him how to cook and clean, gave him allowance based on the completion of his responsibilities, did service projects with him, trained him in classical music, read him the classics, took him to museums, historical sites, nature walks and church, and talked to him carefully and lovingly about the difference between right and wrong. And still, after all that, he acted in a way that showed he rejected the values I had tried to transmit to him.

I felt like the velveteen rabbit on top of the garbage heap as I thought to myself, ‘What is the point of raising a child if it ends up like this?’

I stayed on the garbage heap for a while, until my husband finally called me down. “Our son hasn’t been good, but he isn’t bad,” he said. “It isn’t all or nothing with him. He’s a complex human being.”

My husband didn’t mean to be profound, but it suddenly hit me that, as a mother, I was raising a human being. Yes, that’s obvious, but what are human beings?

How you answer that question will depend upon your culture, your experiences, and your philosophical outlook or your religion. But here’s a place to start: human beings are imperfect. They have good and bad desires, often at the same time, and sometimes the bad can overpower the good.

At the risk of sounding like the next recipient of the Most Unhealthy Parent award, I have to say that this insight has changed my view of parenting profoundly. Instead of seeing my children as beings who need to be steered daily toward perfection – and blaming myself when they don’t reach it – I am beginning to see them as little people who are certain to have their own challenges, simply because of their human natures.

My role is to guide them on the road to goodness, to coach them as they navigate the pitfalls on that road, and to help them understand their human condition. My job is also to love them unconditionally and to help them make course corrections when they get off track.

At The Power of Moms, a favorite saying is ‘begin with the end in mind.’ The idea is that if we want virtuous children, then we need to raise them with that end in mind, rather than haphazardly raising them and hoping for the best. But as we raise them toward noble ends, we have to remember that our end product is still going to be a human being. We begin with the end in mind, but the end will always be some kind of imperfection.

I said earlier that things turn out for the velveteen rabbit in the end. As he sits on the garbage heap, a fairy comes to him and tells him that because of his relationship with the boy, he has become worthy to be turned into a real rabbit. So, the love and sacrifice on the part of the rabbit were not in vain, after all, although they did not produce the result he thought he would get.

In the same way, my love and sacrifice for my son have not been in vain. Although my efforts will not produce a “perfect” child as I naively hoped they would, my efforts will, one day, produce something truly remarkable, not only in my son, but also in me.

QUESTION: Have you had a “velveteen rabbit” experience with your children that left you feeling like you were on top of the garbage heap? How would accepting their humanity and inevitable imperfection help you overcome your feelings of disappointment?

CHALLENGE: Next time you are tempted to feel responsible when your children do not act in accordance with your values and hopes for them, remember that, as human beings, they are bound to make mistakes. Forgive them and yourself.

Holly Hamilton-Bleakley grew up as an Idaho farm girl, but moved to Britain in 1995 to follow her passion for studying political philosophy. She has an M.Phil and a PhD in Intellectual History and Political Thought from the University of Cambridge. She married a British man, and they have six energetic, intelligent, argumentative, imperfect, wonderful children. Her enduring qualities are standing on principle, inflexibility and ambitiousness, which means she often governs her home in a similar style to the way Margaret Thatcher governed Britain, and which may yet lead to her downfall.
Holly and her family emigrated back to the United States in 2013. She blogs at Philosophy for Parents. When she needs to escape from parenting irrational children or writing rigorously rational philosophy, she cooks. So she cooks a lot.