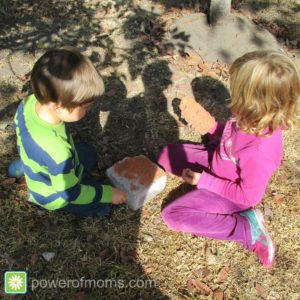 In our increasingly technology-centered world, it may seem archaic to talk about the benefits of limiting screen time for our children. However, for those of us who look back longingly on simpler, less-scheduled childhoods—full of neighborhood friends and hours of interrupted outdoor imaginary play—and want the same for our children, it is important to know that it is possible.

It isn’t easy, but it is possible.

When I was in high school, my mother had a “no television on school nights” rule. And for that, I thought she was the meanest mother in the world. Yet, 25 years later, with two small children of my own, I think back to my mother’s parenting decision and am grateful. Because I was never addicted to the latest show, I found more time to read and write and spend quality time with my family. When I became a parent, my husband and I decided to limit television for our own children.

But it wasn’t easy.

I spent hours at the dollar store buying things for “busy boxes” to keep them entertained when I needed to get something done. I put flour and spoons in bowls on the floor by my feet while I cooked dinner. We spent hours outside on walks, read books, sang songs, and played games. By the time our oldest gave up naps, I had to get more creative. So, I made a quiet time box of toys for her to play with when I needed a rest.

It was definitely not easy, but I persevered because I knew the benefits.

Psychologists and pediatricians have advised parents to limit screen time for children under two, saying that language skills are developed through one-on-one communication rather than one-way exposure. Time spent in front of a screen is time that is not spent outdoors or doing other things that help children develop the motor, communication, and social skills that they will need later in life. Additionally, television programs targeted to children do not always reflect the values or behaviors that parents want modeled for their children.

These scientific benefits and admonitions are helpful motivators, but for my family, continued motivation comes with seeing the practical effects of our decision in the everyday play of our children. As work-at-home parents of two small children, there are times when we cannot devote our full attention to their entertainment. It is during these times that the benefits of our early efforts at encouraging creative and imaginative play become the most clear.

Like when my six-year-old, left on her own for a few minutes, sets up a “spa” for her brother, complete with face wash, body brush, and lotion.

Or when our children head to the backyard immediately upon returning home to pick up where they left off in their games of pretend.

When our children make “mud-pancake” restaurants with friends, inviting any passing adult to sample their products.

And when they disappear for half an hour and appear wearing our clothes, speaking made-up languages, or rushing off to “feed the fairies.”

These are the tangible benefits of limiting their exposure to media and empowering them to take back their childhood.

Not having the option of television forces you to be creative when your children are young and encourages their own creativity as they age. If you are a new parent, starting off with limited screen time is much easier than weaning older children. However with a little time, effort, and creativity on your part, it is possible to glean the benefits of less technology even with older children.

Rather than turning on the television or handing over your phone when your children are “bored” or you need some child-free time to yourself, look for other screen-free options to occupy them. Here are a few screen-free options that will entertain young children, spark their imaginations, and encourage positive growth and development:

On a playground a few years ago, I struck up a conversation about screen time limits with a father from Spain and he said something to me that I’ll never forget: “The world will get them eventually. So I keep them close while I can.”

The world will get them eventually. Technology is a part of our modern society and our children will learn to use cell phones, computers, tablets, and TVs. They will gain the skills they need to survive and thrive in a fast-paced, future-facing job market. But for now, when they are young, it is worth the effort to give them a simpler childhood: a childhood full of books, nature, imagination, and play. A childhood where they tell the stories, where they are the characters, and where the values they model are the ones they see in their home every day.

It is not easy, but it is possible. For us, the effort has definitely been worth it.

QUESTION: Have you ever wanted to limit screen time in your home? How has it worked for you?

CHALLENGE: Make up a list of alternative activities and the next time your children ask to watch TV or play on an electronic device, see if you can entice them with hands-on or imaginative play instead. Consider if you notice a difference in your home when there is less screen time.

A version of this post appeared in the Winter 2017 Issue of Natural Mother Magazine.

Edited for Power of Moms by Deborah Nash and Kimberly Price.
Image provided by the author.

Sharon is a social worker, writer, traveller, and mother of two. She blogs about her journey to live more consciously as a person and as a parent at A More Conscious Life, and has written an ebook entitled, The Conscious Parenting Notebook, The Parenting Book You Write Yourself, to help parents chart their own individual parenting journeys. Sharon is happiest when she is working to help others, exploring a new country or spending time with good friends. You can also find her on Facebook.