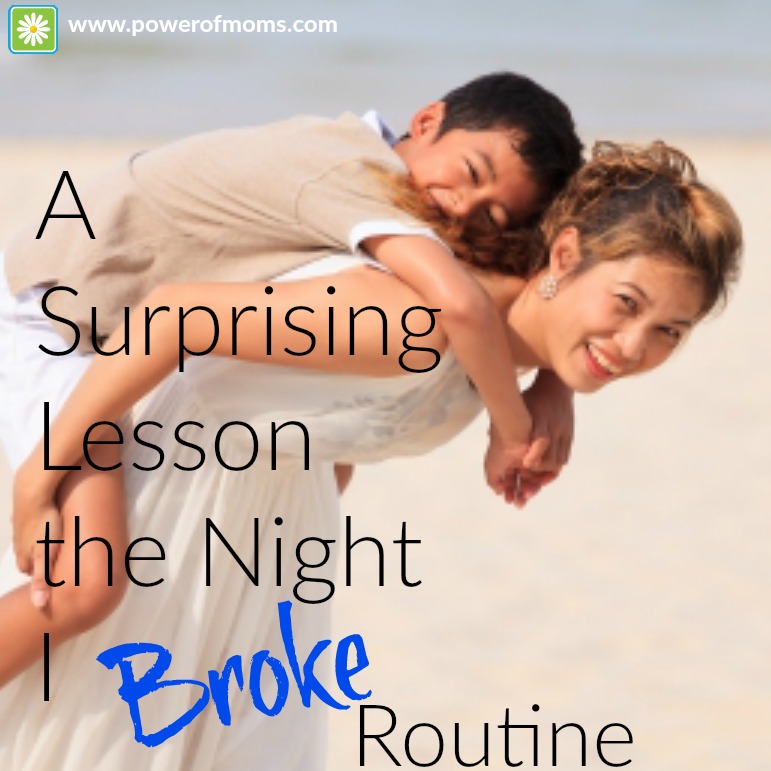 Late in the day with two little boys can be, well, hard. As much as I enjoy the giggles at dinnertime and the plunges underwater at bath time, when they’re ready to put on their PJs, I’m tired. Yet that’s exactly when they’re winding up.

If you’re like me, you’re a parent who is used to managing schedules. I know how many minutes it takes for my boys to do any part of their daily routine. I know exactly when I need to get up in the morning to get every task done before we need to get out the door. (Translation: I can only manipulate the snooze button so far.) So when we get to the PJ stage at night, I know exactly how long it takes before I turn off their lights and can head downstairs.

But recently, when we get to the PJ stage, my two-year-old has discovered the fact that he has a CD player in his room. His little fingers find and press just the right buttons and knobs to not only start the music, but to turn it up full blast. He particularly loves his new Justin Robert’s CD entitled “Recess.” The first song on the album shares the same title and includes voices from rowdy kids in school ready to go outside.  On top of that, there’s a bold electric guitar riff and snappy lyrics—everything that makes a two-year-old boy excited.

When he first played the music, I was tempted to turn it off quickly and re-initiate a more soothing bedtime tenor. But there was something about his strut that kept me from doing it. He was proud. He was initiating his own dance party. He galloped around his rug with his just-learning-how-to-do-it legs, stopped to jump up and down, and then attempted a spin (which he did—almost). It was too cute.

“Mommy, come dance with me!” he said. I picked him up, and we started spinning together. We spun and spun until we got dizzy; I put him down and we laughed and laughed.

It hit me that I, too, was experiencing a beautiful moment in this world. My son knows I love him. But right then and there, I was showing him that I enjoy him. I was in a moment that captured what is so endearing about his age. And I was allowing myself to experience it, savor it, and treasure just how he expressed it in his own way.

My son needs these moments with me when I break the rigor of our usual routine. He needs to know that play and fun are not just allowed, but a vital part of our house and life together. So many school breaks have come and gone when I have had big plans to hit museums or do some grand activity. Sometimes we have followed through and sometimes we have not. But I am convinced that family fun actually begins with the little memories we make at home together.

It’s easy to forget how much we looked forward to recess as children. I remember my feet getting so restless under my wooden desk beforehand that I almost couldn’t feel them. And then the bell rang, and there was racing, swinging, and the opportunity to be carefree.

One of the things I appreciate most about parenting is that it gives us the opportunity to experience the world all over again through the eyes of a child. The beauty of the world is highlighted through the innocence, inhibition, and boundless energy of children.

And that’s when I realized our dancing before bedtime wasn’t only special because I was enjoying my son. He was giving me a gift.  I was getting to be a kid again too.

QUESTION: What are the benefits of family fun that you’ve experienced?

CHALLENGE: Intentionally break the usual routine and do something fun.

Edited by Aubrey Degn and Sarah Monson.
Image from FreeDigitalPhotos/Sura Nualpradid, with graphics by Anna Jenkins.

Rev. Noelle Kirchner, M.Div., is a mother of two young boys and a Presbyterian minister. She writes about faith and parenting on her blog and has also been published at numerous online sites including Huff Post Parents and the TODAY Show Parenting Team.