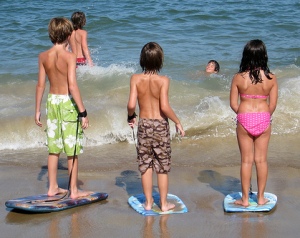 Have I told you that Ray and I have five boys?  Yes indeed we do, count them, five.  In the summer of 1974 their ages were 5, 7, 10, 12, and 13.  With the following words “Please, please, oooh  pleeease”, three girls ages 7, 12, and 13 were added to our household for the summer.  Ray’s cousin was the one doing the pleading.  Her husband, a commercial diver, had received an eight week contract in Hawaii.  If they could find someone to watch the girls she could go to Hawaii also, hence the pleading!

Ray turned and gave me a questioning look with eyebrows upraised.  We talk like that sometimes, without words.  With a slight nod to him, the decision was made, the die was cast and there was no turning back.  Omigosh, what have we done?! We lived in a modest three bedroom, one bath, home.  So, obviously, some re-arranging was in order. Five boys were delegated to one bedroom and the three girls to the other bedroom.  With lots of sleeping bags involved, it was like a giant camp-out. The kids really melded together well, but it became evident to all, very quickly, that Michelle, the oldest, was a drama queen.  She could turn any daily event or situation into high drama with herself square in the middle.  She truly had a gift and it never failed to cause some eye rolling among our boys.

One particular weekend, Ray took our boys, along with our neighbor and his son, fishing.  I in turn took the girls, along with our neighbor and her daughter, to the beach. However, when we returned home later that afternoon the debate soon ensued as to who would get the bathroom first for a shower or bath.  I quickly nipped it in the bud by saying that Sherry would go first.  Bathwater was drawn and I told Michelle to keep an eye on her sister while I went and started dinner.  I heard Michelle call out, “I’m next” so bathing was moving along while I prepared dinner.  Next thing I heard was Michelle yelling “Aunt Jackie come here quick!”  Being used to the drama queen antics by now I merely answered “What, what’s the matter?”  “No! No!” you have to come now!” Michelle shouted back, quickly turning it into a chant “come now, come now!”  I turned off the stove, sighed, and headed towards the bathroom.

Michelle was now pointing with her other arm towards the bathtub saying, “Look! Look! See it’s in the tub”.  As I pulled the curtain back my mind didn’t seem to comprehend the sight before me.  In fact, I leaned forward to get a better look.  I was incredulous!  This certainly wasn’t anything I was expecting to see.  Despite the endless stream of sound coming over my shoulder from Michelle, I seemed to have been struck speechless. I couldn’t find my tongue.  I was unable to speak, for a long time when I heard another sound, it was a snicker.

I looked past Michelle, towards the boys’ bedroom at the end of the hall.  I saw six faces peering around the door frame; my five boys and the neighbor boy.  My mind came to a skidding halt, my tumbling thoughts started to slow enough so that I finally understood.  I got it!  I broke the sound barrier, at last, and I laughed!  This in turn, caused six boys to topple helplessly to the floor rolling with laughter.  This made our drama queen Michelle even more indignant. What was it, you ask, that struck a mother speechless, made a teenage girl totally indignant and caused six boys to regale with laughter?  Why it was a pile of poo! It looked real, really, really real.  The boys had pulled off a grand prank and managed to execute it perfectly. The plastic poo belonged to our neighbor boy who had purchased it at a joke shop. This was no instant prank but a well put together work of art in their eyes.

Dinner that night was hilarious and that is an understatement. Much to Michelle’s chagrin, the boys delighted in retelling the story, over and over, each with their own little spin on it.  Even our drama queen couldn’t help but laugh.

QUESTION: Have your children ever done anything to make you lose it with laughter?

CHALLENGE: Try and make your children lose it with laughter by doing or saying something silly that they wouldn’t expect from you.