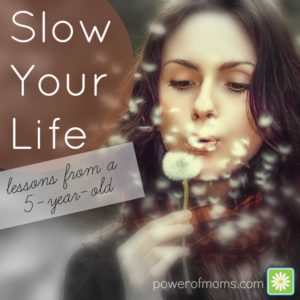 The walk is .28 of a mile to be exact—measured after walking it over 150 times last school year. In the beginning it was refreshing. Most days, it still is.

Every morning, the kids and I walk to school, and say goodbye to my first-grader. My younger daughter and I then return home. We walk this path four times a day for school drop-off and pick-up. A ritual, a process, a part of our day-to-day.

My bright-eyed, lively five-year-old has many sides to her personality. On any given walk to school a passerby may see a seemingly different child each day—fluctuating between chatty, quiet, grumpy, eager, energetic, dragging, smiling, crying. Sometimes I think she has more sides than my attempts at solving a Rubik’s Cube.

Although my daughter’s many personalities keep me on my toes, one consistency that almost every person who observes our walks to school can attest: we are slow. In general, I am not a fast-paced girl. I seem to gravitate toward slow schedules—slow running, slow driving, slow eating.

I appreciate the unhurried state. Yet the day-after-day dawdling strolls at times leave me a bit impatient. I find myself quickening my pace, with a bit of edge in my stride and voice. By the time we returned home, I had shifted from a peaceful mama to a frazzled mama. A fresh perspective was required. A new daily attitude needed.

My daughter lives in an unhurried state. She dresses for the day at her own pace, twirling and spinning between dressing and brushing her teeth. She eats leisurely. No need to rush breakfast. Dessert? She savors that gooey roasted s’more while the rest are wiping their finished sticky faces. She dawdles. She sings. She snuggles and cuddles.

She embodies presence. I droll up an image of her side-by-side with the Zen master Thich Nhat Han—smelling the flowers, tasting each bite of food, washing their hands in complete, utter awareness. Having read several of this monk’s books and wise words, I get the basis of mindful living. But now I also get to live with a child who visibly lives the simple and slow life. The unhurried life. What is the rush?

I awaken. Perhaps it is okay to stop and savor the things of life. Maybe pausing to relish a bit each day will keep me grounded.

We can live life in a more unhurried pace. Let’s enjoy the journey. Gradually, we can create new habits, and, through the process, enjoy the sweet daily moments. Here are a few ideas of how to  slow life’s pace:

Stepping away from our chronic state of hurried and busy allows us to regroup, reconnect, and recharge. A life less hurried is a life more sweetly savored.

QUESTION: What is one step you can take today to live a life less hurried?

CHALLENGE: Choose one way to slow your life. Set the intention, write it down, and practice it until it becomes a natural flow in your life.

Meg is a joy-seeker, kindness advocate and soul-filled living teacher. She is a Midwest native who now resides in Alabama with her husband and their two children. A perfect day would include writing words, running, gathering with family and friends and reading a good book. She shares ideas and tips on how to live a life more intentionally and soul-filled over at megmagusson.com