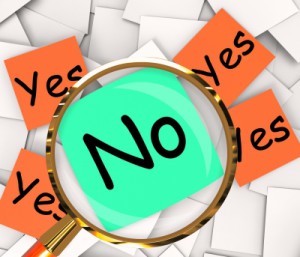 Through some (un?)fortunate combination of being innately headstrong and tending toward laziness, I have never had much trouble saying no to things that would detract from my happiness rather than add to it. There have certainly been times I’ve been overwhelmed, and deliberate motherhood has required me to do plenty of things I’d rather not. But in general, I think I’ve maintained a good balance between what I “should” be doing and what I actually want to do. For me, feeling comfortable saying no comes down to four basic strategies:

When my youngest daughter was in preschool and her little brother was still a toddler, many of her classmates would head to the park after school for a big picnic lunch/playdate. We were invited every week. Here’s the thing: there are few activities I despise as much as I despise taking small children to the park. It’s not so bad with older kids, but constantly pushing a kid in a swing or staying within arm’s length of a climbing toddler? Forget it.

At first, it was hard to ignore the clucking disapproval of the other moms—what kind of mom won’t take her children to the park?? But one particular day I realized: of course my kids would love to go to the park, but my opinion matters, too. And I hate it. They can go with my husband (who doesn’t mind it). That day, we went home, had lunch, and then they made a huge pillow/blanket pile in the living room while I read a book. I found a compromise that made everyone happy, and that’s a worthwhile goal in and of itself.

I lead two of my daughters’ Girl Scout troops. I don’t love it, but I love my girls, so I’m happy to do it. What I’m not, though, is super crafty or super outdoorsy. So our troop activities are pretty basic.

In a moment of self-doubt, I told my co-leader I was worried the other parents might be disappointed that our troops weren’t doing fancier crafts and more exciting adventures. She kind of snorted and said (I’m paraphrasing), “We do what we can, and if any of the parents don’t like it, they can form their own troop.” She was right, of course; and even better, she was perfectly okay with the amount of time and effort I could contribute.

I realized how lucky I was to be working with someone whose contribution level matched my own—I really couldn’t have managed to be involved with two troops if I’d been working with a more demanding co-leader. (And, for the record, my girls have loved their Girl Scout experiences.) If you’re working with someone who expects more than you can give, it’s time to have an honest conversation about what you are willing and able to contribute, or it’s time to step away from that commitment altogether.

In years when our finances allow, I like to give money to my kids’ schools. They go to fantastic public schools; I recognize that funding is tight; and I’m glad to help. But is your school anything like mine? They are CONSTANTLY asking for money. I’ve come up with a solution that works well for me. I write one check at the beginning of the year, in an amount I can afford and that I feel is generous. Then, when the supply requests, jog-a-thons, bake sales, wrapping paper drives, party funds, restaurant nights, group gift collections, and book fairs (I could go on) come beckoning, I just block them out. I’ve given what I can, and as far as I’m concerned, my obligation ends there.

I hate to cook. I always have. I would rather take a toddler and preschooler to the park. This creates some problems because my kids are definitely developing into foodies. (It’s my husband’s fault–he is a fantastic cook–but I have the most time, so I do most of the cooking.)

My dinners are decidedly unglamorous. I order (whole grain!) pizza a lot. When the family is in the mood for something a little fancier, I’ll buy prepared food from the grocery store. So our food is more expensive than it needs to be (sometimes I blush at our food budget), and probably less-healthy, and maybe doesn’t taste as good as it could. Instead of feeling guilty, I’ve decided to feel grateful that we can afford to eat out and that we have a wide selection of healthy options. Store-bought muffins don’t taste as good as homemade, but you know what they taste better than? No muffins at all. I’m never going to be a great cook, and that’s okay.

So to all those who are not quite as lazy and/or headstrong as I am: good for you! But remember, you don’t have to do it all, and maybe these four strategies for saying no without guilt will help.

QUESTION: What are your strategies for saying no?

CHALLENGE: If you’re feeling overwhelmed, re-evaluate what you’ve said yes to, and why. Is there a way you can step back?

Alisha and her husband live in southern California with their three daughters and two sons. She and her husband both have degrees in philosophy; they met while working as editors for their university’s undergraduate philosophy journal. (It was much more thrilling than it sounds.) She shamelessly uses Google when she gets stuck on The New York Times crossword puzzle and enjoys reading and ballet. She once indulged her passion for pie-making to such an extent that her children complained about having to eat pie too often! (She can’t understand it, either.) She does NOT enjoy running, but thanks to a bet she lost, she runs regularly anyway.