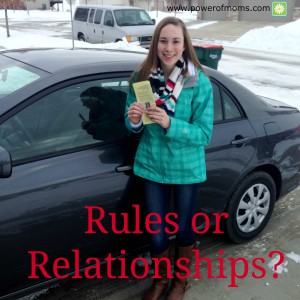 My oldest daughter recently turned 16 and got her driver’s license. Many people have asked me about our rules for her driving: What time is her curfew? How far can she go? Who can she drive? My simple answer is this: we focus more on our relationship with her than the rules.

My husband heard this concept in a family science class in college. He learned the importance of cultivating a relationship with your teenager rather than enforcing a long list of rules. Many people think that when it comes to parenting teenagers you’ve got to “lay down the law” and battle them to get them to obey and behave. They think you’ve got to establish a lot of rules and consequences and be on the lookout for any misbehavior or rebellion.

But there is a different way. By nurturing a close relationship with your child, you can heavily rely on that bond for influencing good behavior rather than primarily using rules and punishments.

Part of this philosophy is based on the developmental growth that occurs in the teenage years. Growing up includes the process of separating from parents, and by the end of the teens that separation should be complete. When children are young, parents control most of their lives and make most of their decisions. Parental control decreases over time as children mature. Children learn how to make more and more of their own decisions, and by the time they leave the house they are equipped with the skills to live independent lives. (Some parents mistakenly subscribe to the opposite philosophy, where young children are given many liberties and allowed to make more decisions than they are developmentally prepared for. Then as the child grows, the parents clamp down and implement more rules to keep the child in line. This often turns into a vicious cycle of rebellion followed by more rules followed by more rebellion, and ending in a soured relationship.)

With the emphasis on having a strong relationship, parents are ready to guide their children through adolescence with less and less control over their choices. This doesn’t mean you don’t know what is going on with your child. In fact, it is the opposite. Through your relationship, you know a lot about each other.

Rather than reviewing rules, you are getting to know your child in a more mature way—trying to understand what the child is thinking, learning, doing, and experiencing. You have mutual respect and consideration, and you communicate about what is going on each day. You know where your child is and what they are doing, not because they have to tell you, but because it is a natural part of your relationship.  In the context of a relationship, the child understands that she can’t come home whenever she wants, because her parents will be wondering where she is and would be worried about her. She wouldn’t take the car without discussing it because the parent might need it.

In this system, parents expect the child to talk to them regularly, not just to inform them of what she is doing, but to have an open discussion together. This might include the child recognizing that what she has planned won’t work for the family as a whole. For example, if a child says she wants to go to a friend’s house after the football game and stay out until 1:00 in the morning, the dad might explain that the family has an activity planned early Saturday morning, and so she will need to come home earlier.

Don’t get the wrong idea that keeping a healthy, strong relationship with your teen is easy! It takes work, patience, and self-control. But it is possible, and it is preferable to viewing your teen as an adversary and trying to control her behavior with rules. You have to learn how to overlook the difficult but normal teen behaviors and forge ahead with a positive attitude toward bridging the gap that your child insists on creating as part of her natural development.

Don’t expect that this will always go smoothly. There may be a time when your child forgets or doesn’t want to communicate and just stays out late without explanation. When this happens, have a discussion (not a lecture or a reprimand)based on mutual respect. The discussion should center on finding out what happened and why the communication broke down.  Give the child the benefit of the doubt, asking for her perspective rather than launching into a lecture about how terrible the behavior was or how it impacted you. Believe that the child wants to make good decisions and keep up the relationship, and re-emphasize that expectation. Assume the best of the child, and be surprised when she doesn’t behave in that way, rather than assuming the worst and trying to “catch” her in her mistakes. I’ve discovered that it makes a big difference to come at the relationship from this perspective.

Again, it’s not easy, but it is possible. We are fortunate to have this foundation of a good relationship with our 16-year-old daughter , and therefore don’t have a lot of rules in place for her. She tells us where she’s going, whom she’ll be with, and when she’ll be back. We decide on an appropriate return time depending on the particulars of each situation—weeknight or weekend, what the activity is, etc.  If she gets into a phase where she doesn’t want to tell us these details, where she wants to pull away emotionally and gets annoyed when we “make” her talk to us, we will remind her of this concept. We’ll tell her that we prefer to have a relationship instead of a lot of rules, but that requires consistent and respectful communication. We’ll be understanding and sympathetic, knowing this emotional separation is a normal part of growing up and not something to get annoyed about, but we’ll be firm in the fact that we need to know some of these details before she goes out.

QUESTION: What changes could you make to focus more on your relationship with your teenager than on a set of rules?

CHALLENGE: Take time this week to do something to build your relationship with your teenager. You might try finding out more about her interests, struggles, or goals.