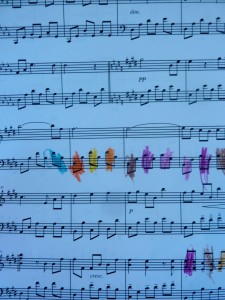 When I was in elementary school, I was convinced I needed a theatrical agent. “Theatrical” was a big word for a fourth grader, but I had big dreams to match. Nothing was out of reach. I knew I was going to be famous.

I continued to work hard at my talents throughout my secondary education and college, and I enjoyed many successes. After I became a mom, however, my hours practicing dance and piano were replaced with laundry, nursing, kindergarten, and driving my children to their own lessons.

My fingers had forgotten all but a few children’s songs from church. My voice knew only to project when a child was misbehaving. My arabesque was low and crooked. All the talents I had worked so hard to develop, and in which I found great joy, had been neglected. They had fallen into the mother’s black hole of “things I used to do.”

Fast forward to January 2012. I decided then that it was time to uncover and resurrect these old talents, and I made a goal to learn Rachmaninoff’s Prelude in G Minor. I must admit, it was a lofty goal–one way out of my league. But I was determined.

It was a slow, arduous process. But note by note, chord by chord, count by count, I started to piece it together. By March, I had learned three and a half pages out of eight. By May, I had made progress, but I was discouraged and desperately needed motivation.

That weekend my friends developed a brilliant idea. One of them didn’t know how to play the piano and wanted to learn; another wanted to improve her piano skills. Based on those two simple desires, the Revival Recital was born–an opportunity to develop and improve talents and perform on stage.

It wasn’t long before word spread, and we began recruiting other moms who wanted to polish their musical skills. We were committed! I rented a recital hall and began to create a program.

All summer long, women in the neighborhood were practicing the piano, flute, fiddle, trombone, and voice. There were solos and duets, trills and vibratos. The enthusiasm was contagious as anticipation for our September performance grew.

The benefits of organizing this Revival Recital were numerous:

On a beautiful September afternoon, our recital hall began to fill with participants and their families. Eager children who had watched their mothers practice with diligence, make mistakes and fix them, and polish phrasing and tone sat in their seats with excitement and anticipation. Supportive husbands who had commented all summer on the progress and beauty of the music that filled their home hushed the children and smiled at their wives, who were nervously clutching their music. 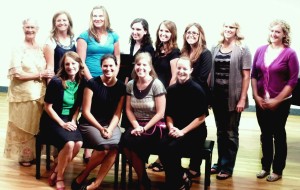 One friend played a simple piece, having learned to play the piano for the first time in her life. What an accomplishment! Another friend played the fiddle while her husband held her newborn baby. Other friends played an advanced level piano duet with flair and vigor. We cheered and encouraged each other as the recital progressed.

This year, plans are in place for our second annual Revival Recital. If you are interested in doing your own, here are some suggestions:

One song, one summer, lots of friends and family. Imagine how it would feel to learn something new and challenge yourself. Imagine how your children would feel to realize that mom has talents other than making lunch. Imagine giving yourself time to focus on you, your talents and goals. Imagine your family’s faces as they give you a standing ovation after your performance. You really can’t pass this up!

QUESTION: What talents do you want to “revive”?

CHALLENGE: Find an opportunity to “revive” a talent and share it with someone.

Karin is a stay-at-home mom to three girls and two boys, ages 12-2, who consistently keep her on her toes. She received her Bachelor's degree from Brigham Young University in English and enjoys collecting re-tellings of fairy tales and hopes to one day write her own. She is an active volunteer at her children’s elementary school and enjoys reading, hiking, international travel, music and dancing in her kitchen when no one is looking. She blogs when she can find a minute at Brownie Bites