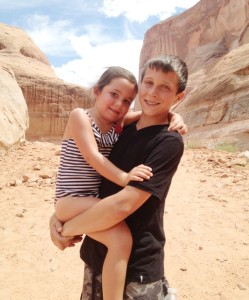 This past summer, my husband and I determined to take our children on family vacations. So five weeks into summer, we had already dragged our kids all over the state of Utah, visiting a grand total of nine state and national parks and monuments. We’d camped and hiked and learned to water ski. We’d played games in the car, sung around the campfire, and roasted enough marshmallows to last a lifetime. Phew! Family-of-the-Year Award, right?

The intent was to create a lot of family memories. Well, we created them all right … just not the ones I had planned on. Within 43 days, my family of seven spent 16 days packed into the same SUV. And what is still reverberating in my head is this: “It’s my turn to sit in the middle!” “Why did he get the biggest piece?” “I wanted to choose the movie!” “She didn’t wash her hands after going to the bathroom!” And here’s my personal favorite: “She won’t listen to me!” Sure enough, the offender did in fact have her fingers plugged into her ears.

I’ve got to hand it to them: those kids can concoct a fight in seconds flat. I know this is normal sibling stuff, but sometimes when they are going at each other like that, it makes me feel discouraged as a mother, like I’ve done something wrong.

Have you ever felt that way? That sinking feeling that at some point over the years you must have taken a wrong turn in your discipline? Maybe not given them enough attention when they needed it or in a tired moment modeled a lack of tolerance or love?

It’s tempting to sink into despair when your kids can’t seem to get along no matter what you try or when they consistently fall short of your expectations. At times I’ve caught myself thinking, “This is what I’ve dedicated my life to? Haven’t I taught them anything?”

But just when things get looking pretty bleak on the mothering front, out of nowhere comes a redeeming moment, such as this one that happened on the last day of our most recent vacation.

We were walking back from Rainbow Bridge at Lake Powell, and my four-year-old had a major melt down. This is my child who despises hiking, and this final mile of the walk must have depleted an emotional reserve somewhere. I was already carrying my two-year-old, which made carrying my four-year-old impossible.

Then around the corner came my thirteen-year-old son who had been ahead of the group. When he had heard the fit, he had turned around, come back to where we were, and picked up the screaming child to carry her back the rest of the way.

Talk about a moment of transformation! Given the recent squabbling from the back of the car, this display of compassion was quite a surprise. And I wisely basked in it. After all, if I were taking the blame for the family dysfunction from earlier in the trip, then I could indulge in taking at least a little bit of credit for this unexpected turn of events. Maybe, I concluded, I’m not failing with my children after all.

That single act of service by my thirteen-year-old son was powerful. It instantly compensated for all my recent misgivings as a mother and filled me with the much-needed reassurance that I must be doing something right.

As mothers, let’s dwell on these redeeming moments when our children show their true colors—though they may be few and far between—instead of the ones when they are less than pleasant. The kids are going to turn out okay; you even catch glimpses of it now and then. So give yourself a pat on the back, because you deserve it. You’re doing just fine as a mother.

QUESTION: When was the last time your child or children surprised you by doing something thoughtful, selfless, or good?

CHALLENGE: Instead of focusing on the negative behaviors of your children, focus on the good things they are doing. Try to see the bigger picture of who they are really becoming.

Jenny Layton is the creator of the blog The Happy Gal ,
and the owner of Jenny Layton & Company. Whether writing, speaking, or blogging, Jenny blends her background of professional organizing, health, and nutrition with her personal life experiences to inspire other women to create a life they love, full of peace and purpose. Jenny lives in Kaysville, Utah with her husband and five children.