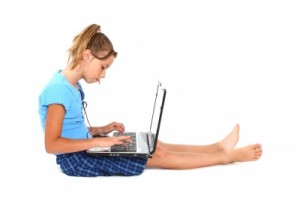 Here at The Power of Moms, we’ve receive numerous questions about how to manage social media and technology in our lives and in the lives of our children. When should kids be able to have a Facebook page or a cell phone? How should we decide what TV shows our kids can watch?

Wonderful answers are offered in this re-post the blog 71 Toes which is run by Shawni Pothier,  Power of Moms Co-Director, Saren’s sister.

I have a 12-year-old daughter BEGGING me to have a Facebook page, a cell phone, and to watch shows with her friends (namely a show called Psych and a few PG-13 movies) all in the name of EVERYONE else is doing it except her.

I have asked a few trusted friends. Many of them have mentioned that they know that certain television shows or movies aren’t the best and/or that perhaps Facebook isn’t the best way for their child to spend their time and yet, they allow it simply because they don’t want to socially isolate their child and/or have them be the awkward one that isn’t allowed to do anything that everyone else is already doing.

I understand this feeling of wanting your child to have as many ways as possible to relate to their peers. I feel the same way. I acknowledge the fact that there are some definite benefits to the social networking that happens on Facebook. And yet, there is a part of me that wonders how much of a slippery slope this may become if I begin to rationalize my parenting decisions in a similar manner.

I would love to know at what age your children are allowed some of these privileges, especially a Facebook page. Is it an age decision for you, or something else?

I realize there are no “right” or “wrong” decisions on this one…each child and family is so different. I just love and appreciate your perspective so much.

Oh man, the Facebook issue is a big one…and so is all the media stuff that has such potential to suck so much out of the life of a teenager.

I certainly don’t have all the answers, and someone a few stages ahead of me may have better answers.  But I believe you are exactly right, there is no “right” answer for this because all of us parents have to figure out a way to deal with social media that fits our own unique families and children.  For what it’s worth, this is what I think about the whole deal:

Social media is addicting.  Even for parents.  I mean, how many times do we mothers check the internet, whether it’s for a blog, checking email, Pinterest, etc?  Seriously, I bet most of us spend way more time on this thing than we mean to.  So we need to be so aware that we are setting the example for our kids in so many ways.

That said, the Internet is not a bad thing.  There are so many uplifting, wonderful things to be inspired by.  We just need to find a right balance.

Here’s my biggest concern:  If the Internet is addicting to us who have only had it for the last ten to fifteen years, how much more addicting is it going to be for our children who have had it at their fingertips since they learned how to walk?  Scary stuff I tell you.  Kids are texting more than they are talking.  Homework is sometimes turned in through emails.  Text books are sometimes only available to be read on the Internet.  The world has been opened up to us through the Internet…what friends are doing on the weekend to what master chefs are cooking.  We can do anything from buying tickets to a show to getting our grocery shopping done through these magical little boxes in our homes or in our purses.

My point?  I think some serious training and discussions must be done with our children.  And they must be on-going.  All the time.  I do love things that provide for a great topic of discussion with my kids.  (Max, Elle and I had a really great one about the absence of junk food in our home the other night…loved it and their questions, plus the opportunity to explain Dave and I’s reasoning once again.  The same kinds of conversations come up about Internet and I do love to discuss it with them.)  I just think it’s so important if we are putting limits on things to let our kids be part of the discussion.  Tell them all the pros and cons and let them help decide what is appropriate knowing the rules and expectations and higher big-picture goals for our family.  Of course, we as the parents are the ones who must make the rules.  I just like to have my kids in on a discussion as towhy we are making them.

My oldest son, Max got a Facebook account when he turned 12 (much too young).  He didn’t “get” it.  I checked in on him a few times and found out that he and some girl had some really weird, immature “discussions.”  (Nothing “bad,” just not very thoughtful.)  It worried me.  We talked it through.  We decided together it was best to delete his account.  About six months later he felt like he was ready again and has been really pretty good with it ever since.

My next child, Elle (14 years old), on the other hand, has no interest whatsoever on Facebook.  Her “thing” is Instagram.  And to be honest, I kinda like it because I know exactly what she’s been up to by watching her “feed.”  And she’s pretty creative with her pictures.

With any media, I think if we are willing to allow our children to be part of it, we need to be willing to be part of it as well.  And we must realize that sometimes this takes a LOT of work.  I have to admit I have a really hard time with Facebook.  I have an account but I can probably count the number of times I have checked it on my fingers.  So I’m not so great at keeping up with Max on that thing, even though I know he rarely posts anything.  I need to repent of my ways and get on that thing more often…or get him off…or switch him over to Instagram 🙂

The bottom line is that for our family, we have decided not to shut out social media because it’s there whether we like it or not.  We have, instead, decided to try our best to train kids to use it in the right way with rules from us, after a certain age.  There is no privacy.  We can see what they write at any time, on phones, Facebook, Instagram, etc.  We talk about it a lot.  We go over etiquette.  We try to help kids understand the pros and cons.  And we try to set a good example in how we deal with it all ourselves.

I applaud kids when they just choose to close out certain types of social media.  I LOVE this cute girl my friend Sarah hooked me up to who realized that shutting down her Facebook account was the best thing for her.  She realized that herself, and is so much better off because of it.  But I think that shows an amazing amount of maturity.  I’m going to take the liberty to go ahead and assume that wise decision came after many discussions with her parents.  Everyone’s answer to social media is going to be different.  We just need to figure out what works for our own family.  And we need to get right in there and help our kids make good decisions.  Because as mature as we may think they are, they are NOT mature enough to really “get” social media without some serious thought-out training (and real-life growing up maturity).

As far as the movies and television shows go, TV in general makes me crazy.  I do not like it one bit, which is good because we don’t watch it much around here, but in many ways I feel like I don’t even “get” pop culture because not watching television (even in my growing up years) makes me feel like I’ve been living under a rock when people talk about who the finalists are in this or that, or what’s happening on such-and-such a show.  Not that any of that is important in the whole scheme of things, but in a way that kind of stuff opens great avenues to talk to kids about what’s going on in the world.  What is appropriate behavior, how would they act if that happened to them, who do they admire, etc. etc.  I know families who watch shows together every week and have so much fun with that and the discussions that result.  We’ve tried that but just can’t seem to make it work.

Sometimes it’s so good for kids to have exposure to little things that we can talk through now.  I LOVE the “Big Talk” we have with our kids because it plants that seed for kids to come talk to us about any questions they have.  Same with television.  If we plant some seeds and know what the heck our kids are talking about when they talk about Psyche or iCarly then we can have meaningful discussions with them.  We only allow television on the weekends (and a little bit more in the summer) but I still can’t count the number of times when some show has come on where teenagers are doing something so silly and thoughtless and the good discussions we have had as a result of that.  And I like that.

Bottom line is that we parents have the daunting responsibility to set parameters and help our kids stay safe in an often scary, unsafe media world.  Sometimes families will shut it out all together, others will let it in sparingly after an age they deem appropriate, but I feel like whatever the rules are, it’s so important to give kids ownership of the social media that is looming so largely around them.  We need to teach them responsibility and what the good parts and bad parts of media are so they can make good decisions when we’re not hoovering around them.  I want them to make great decisions and stand up for what’s right when they are at a friend’s house or when we’re away from the house and they are curious, and I want them to know why those decisions are so darn important, and why we have the rules that we do.  We as parents definitely need to set parameters and boundaries, and we are the boss.  But if we let them have a little bit of say in the decision-making they are empowered to make other good decisions in their lives.

*** Please add your thoughts and information on the policies and approaches that work for your family below!

This post was originally published on the author’s blog, 71 Toes, where you can find a wealth of great mothering ideas.

Shawni is the mother of five wonderful children.  To see her blog, go to 71 Toes.