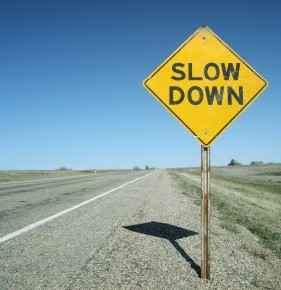 Last night I was driving down Parley’s Canyon at a pretty good clip. All three lanes were dotted with traffic and moving at a steady pace. The immense darkness on both sides of the interstate, kept me focused on my two white lines and the distance of the car ahead of me.

Suddenly, a wave of brake lights sparked on in front of me. Every car, barreling west on I-80, was forced to slow down until we had been corralled into what looked like a sea of glowing red embers where three flashing arrows indicated we were to merge into two lanes… and then one.

It was the perfect visual for what has happened to my family over the last week.

Two months ago I noticed that both my twin boys (age 2 1/2) were beginning to stutter. I figured it was probably normal. They were going through a verbal explosion, acquiring new words by the week, and I assumed their mouths were simply struggling to catch up. I watched and listened, hoping it was something they would outgrow. But last week, after talking to a friend familiar with stuttering and doing some research on my own, I realized theirs is a true stutter that needs intervention, and the earlier the better.

I won’t go into the angst I’ve felt, or the guilt I’ve had to process, that maybe their stuttering is a product of my mothering or the dynamics of our family. But I did learn that the home environment and the pace at which a family moves are significant contributing factors.

We have five children, including two sets of twins. All five were born in the short span of four years. I don’t go very many places with my children for logistical reasons. But our home is, without a doubt, chaotic. As much as I’ve tried to instill routines and abide a good schedule, we’re hustling much of the time just trying to prepare meals, feed, clothe, and bathe everyone, get children to school or lessons on time, read and do homework. And of course, there are the daily disasters to clean up. When my husband is home, it’s much more manageable, but during certain seasons of the year (like tax season) his profession requires him to work late nights. So with some imagination, you can guess our playroom, dinner table, and couch (especially during story-time) are loud places where each child seeks my attention, wants to sit on my lap, takes their small hands to turn my face towards theirs. They want to be heard – all five of them, and often at the same time.

It is no surprise my boys have developed a stutter.

The first thing we were told to do was slow down. Slow our life right down and give our boys plenty of white space to just be. This means if we’re running late, were going to be late. And we’re not going to worry about it. It means giving ourselves wider margins when we have somewhere to go and I have five children to buckle into seats. It means creating a calmer atmosphere at home by speaking slower and softer. It means leaving the dishes in the sink when my boys are trying to talk to me and they need my eyes. It means moving through the evening without getting irritable when it’s past bedtime and my girls are jumping on the couch and someone has smeared toothpaste all over the bathroom floor. It means spending more one-on-one time with each boy – a rare occurrence with twins. It means giving them more physical closeness, choosing to do less, and training everyone in our family, even their sisters, to not interrupt when the boys talk but to give them our full attention. In effect, I feel like the brake lights have been slammed on and it’s now my job to blow the roof off our habits and stop rushing, even if I am the only one asked to merge and the rest of the traffic is going to keep trucking on by.

So I’ve been experimenting over the last week and it’s been interesting. As I’ve come out of myself and set aside my agenda for the progress of my boys, I’ve discovered a place of patient living I haven’t been able to access in recent months. I’ve found a well I didn’t know was there – an ability to do something difficult while flowing at a more organic pace. With new motivation, and some prayerful pleading, I am finding it easier to be softer, gentler, and more attentive.

You might think I’ve felt unproductive. But I haven’t. I’ve actually felt empowered. I’m still getting the major things on my list done, but it’s as if choosing to slow down has somehow stretched out time, giving me space to take care of the things that really matter.

There’s a lot to be learned down there, at my boys’ level, as I crouch low and listen to them speak. I look into their brown eyes and watch their lips work words, wrangle words, repeat words. Only to discover it is connecting us, tying us together in a tighter way, as we peel off the layers of living that do not matter.

It took my boys stuttering to realize that each of my children need this kind of attention and kindness. And I can’t help but wonder, what else is happening to our children (that we can’t see or hear) because our lives are too hurried? What’s going on in their hearts and minds when we are too rushed to listen, to distracted to talk gently? It’s not that we don’t love them, but maybe that’s the message we’re sending when we’re too concerned about keeping up, doing more, or squeezing in one more errand. Of course we want to expose our children to every sport, instrument, or art form, but at what expense? What is happening to all that precious white space we are given at the beginning of each day?

This recent putting on the brakes has me thinking that maybe families everywhere could benefit from slowing down and rushing less. A patient, unhurried home can be like a fertile field in which children can grow at their own pace. A patch of dirt wide enough to allow for any mistake. A place of nurturing where every child knows with confidence that they belong, they are loved, and they are heard.

QUESTION: Is your family feeling squeezed by too much rushing? Are there things you could eliminate to allow yourself to slow down?

CHALLENGE: If your life is feeling a little too rushed, work this week to find–or create–some margins.