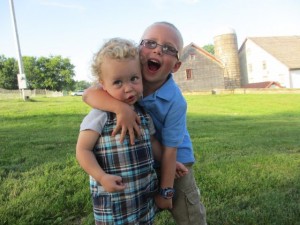 In the final stretches of the day, on those lazy hot afternoons, I feel like I should be wearing a black and white striped uniform and carrying a whistle. Yet the more I play referee, the crankier everyone seems to get (especially me!). But what else can I do? This referee role is such a knee-jerk reaction. It’s hard to think beyond it, especially in the heat of the moment. But I do have other options. Although they may seem to take a little more time and effort, I have found them more effective than calling foul.

After reading Nurture Shock, an excellent book I highly recommend, I decided I would try being a cruise director. Let me explain.

In Nurture Shock, the authors describes Dr. Laurie Kramer’s work. She is a therapist and researcher who teaches siblings how to get along. She doesn’t focus on conflict resolution as much as playing together effectively. Inevitably, she says, adults will come to her and say, “My sister and I fought like cats and dogs but now we get along great.” She explains this is very common (and doesn’t this give us hope?)  and not unreasonable to expect because really it’s the net sum of your relationships that matter. So you fought with your sister. You also shared a room with her and had slumber parties and late night snacks. In the end, these positive memories, of playing and interacting and working together, out numbered the bad.

So I stop constantly trying to stop fights from erupting. Instead I focus on creating some positive memories to balance out those fights. As the cruise director, I enthusiastically shuttle people from activity to activity. Cooperative games, meaningful work, family excursions, consistent family traditions—these are the things that kids do remember. The long afternoons of fighting will fade. Then, as an added bonus, when they whine and complain about family activities, they are ganging up against me instead of each other. I can take it.

Another book that has helped me think differently about my role when my kids fight is Siblings Without Rivalry. It’s a book that was originally published in the 80’s but it has some timeless parenting advice. One piece of advice is to get yourself out of the referee role by acting as a translator instead.

Nobody is good at listening when he or she is in a fight, not even adults. When your temper flares, you are defensive and impatient and basically terrible at communicating. How can we expect kids to be different? So instead of just saying (ok, yelling), “Stop fighting!” we need to help them talk so they can come to a resolution.

“Mae, Lalo is saying that he wants you to stop taking away his dinosaur. What do you say to that?”

“Lalo, Mae is saying she really wants a turn with the dinosaur. What can you tell her?”

It feels a little contrived at first, but I was amazed at how quickly they calmed down. When they felt heard and understood, even if it was just by me, it was a lot easier to discuss the problem. And incredibly, sometimes, just sometimes, they come to a resolution without me making any suggestions.

Another lesson I learned from Siblings Without Rivalry is that children need help breaking out of roles. For example, my oldest daughter is always the brain behind the play. She directs and her brother, mostly, follows. But when he gets tired of being the “audience” instead of the “rock star”, the fighting begins.

My five year old, Lalo, does something incredible. Anytime he gets some candy, like at the bank or the doctor’s office, he will save the last bite to share with his older sister. His little hands get all sticky and chocolatey as he holds on to his gooey, half eaten gift.

When I catch my kids getting along or doing something nice like that, I am extremely complementary. I shower them with praise and thanks. When Lalo hands Mae his last bite, I know she doesn’t appreciate it half as much as I do. So I cheer and cheer.

Why is that? Why does it make me so happy when my kids get along? Why does it drive me crazy when my kids fight? I don’t know why, but I do know reacting emotionally just escalates the problem. So I try to react creatively, deliberately, and differently than I have in the past. I’m the adult, so I can.

As with so many parts of mothering, the “easiest” thing to do is not always best. We can do what comes naturally and put on our referee uniforms and bark out orders like “knock it off!” or we can think a little deeper and try something new. A peaceful house, especially in the summer, is worth it.

QUESTION: What other effective methods do you have for quelling fights among your children? Do you remember fighting with your siblings? Do you get along now? If so, what do you think helped you overcome any negative feeling towards them?

CHALLENGE: We want to learn from you! Please share below your thoughts on how to get siblings to get along. Photo courtesy of Amanda Hamilton Roos