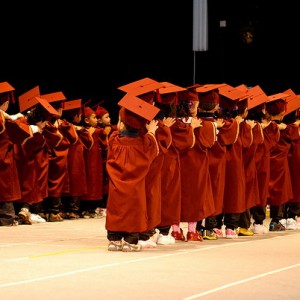 by dhaneshr, courtesy of Flickr.com

Today I signed my youngest child up for pre-school next year. Being new to the area, I chose a school based on proximity and the recommendations of two moms I know and trust. That’s pretty much it. I didn’t investigate other schools in the area and grill them on their educational style and philosophy, nor did I make a spread sheet comparing and contrasting all the differences between said schools. Nope. I just kind of woke up yesterday and thought, “I’d better ask my friend who teaches at that pre-school if they have any openings left for next year. It’s probably time to sign up.”

Why such a nonchalant attitude?

My two oldest children went to the same academic based pre-school, run by a former kindergarten teacher who knew all there was to know to prepare them for that next big step. It was wonderful, and my children did really well. Both of them are excelling in their 4th and 7th grade classes.

My third child went to a play based pre-school that believed the best preparation for kindergarten was learning how to interact with others socially. Did I choose this school because her needs and personality were different than my first two children? Hardly. We just moved to a different state, so I went with the recommendations of family members that lived in the area.

I admit I felt some concern about her academic future, especially since I felt very preoccupied with my two older children’s activities and another new baby at home. Unlike the early years with my first two children, I no longer had the time to invest in doing flashcards and fancy workbooks–Baby Einstein videos would have to suffice.

So how did she do? Well, despite my negligence and all that gratuitous play time at pre-school, she’s by far the top reader in her 1st grade class. Go figure.

So for all the crazy grief mothers put themselves through worrying about whether the pre-school they chose for their child will catapult them onto the road to success or resign them to a life of bussing tables, I say: relax. It’s just not that serious.

I am a firm believer that our children come hard-wired with specific gifts, talents and inclinations (some academic, some creative, some social), and the parents and the home environment have much more to do with where they take all of that than anything. (When I say home environment, I don’t mean mom doing flashcards.)

And pre-school? In my humble opinion (and this is just an opinion, so you can go ahead and slam me with the research if you’d like), whether it’s play based or academic based, children are going to soak up all kinds of stuff. When you’re three, everything is a learning experience.

So if they are so quick to learn, why not send them to a pre-school that will teach them to read as soon as possible? If that’s what you want to do, go for it! But if you don’t, I say not to worry about it. They’ll catch up soon enough with the toddlers reading Shakespeare, and probably even manage to go to college and get a job.

A March 14 New York Times article tells of a woman who is suing her daughter’s $19,000 a year pre-school because it didn’t adequately prepare her for the asinine entrance test required for the elite private school systems of New York City. The suit even quotes specific news articles as saying, “It is no secret that getting a child into the Ivy League starts in nursery school,” and “Studies have shown entry into a good nursery school guarantees more income than entry into an average school.”

Wow. Really? Could it also be possible that the children going to $19,000 a year pre-schools come from a population of people that are already destined to make higher than average wages?

My husband became a surgeon after attending public school his entire life. And while I’m no surgeon, I graduated from college and have learned to function quite well in society despite my own years in public school and even a total and complete lack of pre-school attendance. In fact, my most vivid memories during my pre-school years are that of playing in a laundry basket of clean clothes while watching “Days of Our Lives” with my mother.

So how much does pre-school matter? I guess as much as you want it to.

QUESTION: What do you think? Does pre-school matter?

CHALLENGE: Tell me why I’m wrong.