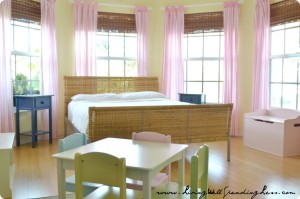 Ruth, from Living Well, Spending Less, and her husband were concerned by their oldest daughter’s lack of contentment with the things she already had. Ruth says,

Then one morning near the end of July, after telling my kids to clean their room for the umpteenth time, I made the somewhat impulsive–albeit pre-warned–decision to take away ALL their stuff.

Just 2 days earlier I had spent half the day cleaning their room & re-organizing their toys and closet, which is something I do fairly regularly. I wasn’t asking them to clean some giant out-of-control mess, just to pick up a few items off the floor and put them away in the very clearly labeled baskets. Every time I came back to check on them, they had not only NOT picked up, they had made an even bigger mess.

I finally gave up and took it all away. I wasn’t angry, just fed up. I calmly began packing up not just a toy or two, but every single thing. All their dress-up clothes, baby dolls, Polly Pockets, & stuffed animals, all their Barbies, building blocks, and toy trains, right down to the the furniture from their dollhouse and play food from their kitchen. I even took the pretty Pottery Barn Kids comforter from their bed. The girls watched me in stunned silence for a few minutes and then, when the shock wore off, they  helped. And just like that, their room was clear.

Sounds drastic, right? And untenable? It turns out, the change has been wholly beneficial to Ruth and her family. Her children are less consumed by wants, they play more imaginatively, and, best of all, everyone is happier. Get the whole story at  Why I took my kids’ toys away (& why they won’t get them back).