Life is short. Some days I forget that, and sheer panic rushes through my body over small meaningless things like figuring out what to make for dinner for the 900th time.

But one day that changed.

I can’t tell you the exact day. Perhaps it was a sweltering summer night while I watched fireflies play tag in the southern night sky, or maybe it was a cool Sunday morning while my husband and I were drinking coffee and dreaming of the future. My mind has forgotten the exact moment, but one day we learned that my father-in-law was dying. 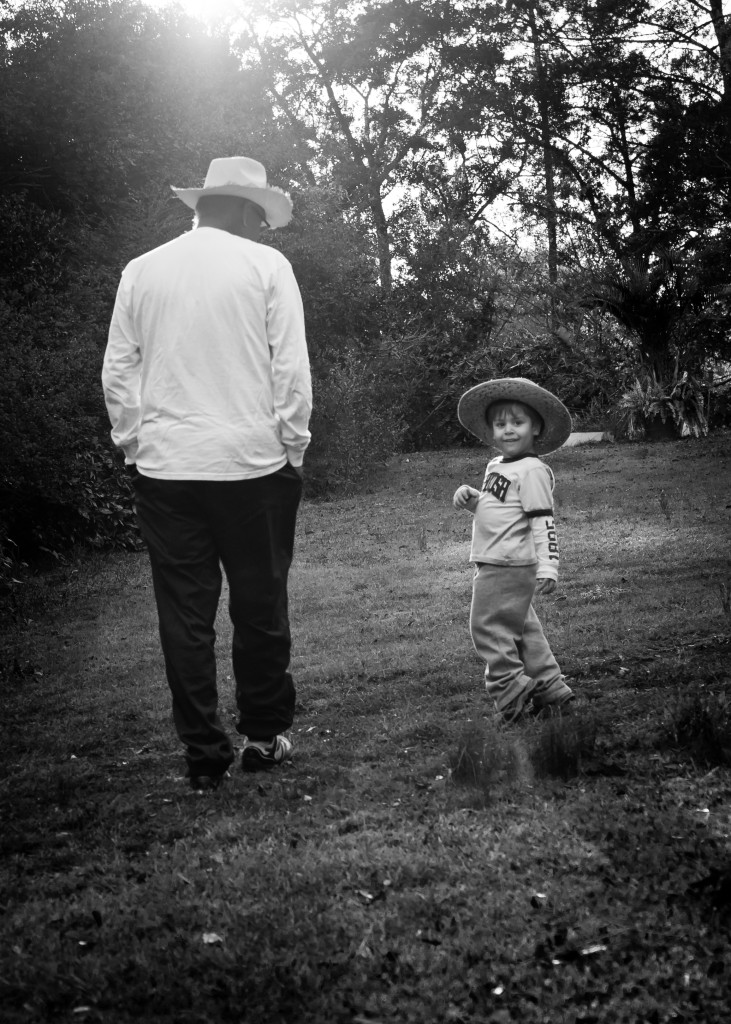 Before my husband, Michael, and I had grasped the seriousness of the situation, when we were still shrouded in hope for a cure, Michael snapped this picture on an ordinary beautiful day. He captured a millisecond of our lives–an aging man walking toward the unknown, and his sidekick looking back with a knowing smile on his face. People always ask who my son Evan looks like and I automatically think his grandfather “Abu.” But now I see they look nothing alike. Now I realize it was never a physical resemblance–it was their joyful spirits that were the same.

Months after this picture was taken, my father-in-law lay in an ICU with tubes snaking through his body. That was the morning Evan bounded down the stairs, his cheeks pink with the enthusiasm only a three-year-old can muster at six in the morning. “Mom, Abu isn’t sick anymore.  We played hide-and-seek last night!”

I thought of this photograph, my father-in-law looking toward the unknown and my Evan looking back at the world smiling. I quickly debated, but realized it wasn’t my place to tell my hopeful little boy that it was a dream. Who knew? Maybe it was real.

I wrapped my arms around him and pressed my face against his, grateful for his warmth, knowing it would be our life preserver in the weeks to come.

Two years later, I watch my son, his eyes dancing as he throws his head back to laugh at a silly knock-knock joke. His joy is so contagious that my daughter, “Miss Serious,” and I, “Ms. Busy,” join in on the nonsense. And in this moment, I think of my father-in-law whose smile and legacy are still here today.

My son was given his joy for life. My daughter received his humanitarian spirit. My husband possesses his fearlessness. While I don’t share any of his DNA, I’m forever indebted to the man who moved forward into the unknown, but stopped for a minute to teach me that life is short, joy is intentional, and it’s never too late for a quick game of hide-and-seek.

CHALLENGE: Take a minute this Father’s Day to share a story with your children about the legacy that one of their grandfathers has left for them.

Growing up, Amy was certain she would be a veterinarian-journalist-dancer-fighter pilot but fortunately for her, not all dreams come true. Instead, Amy lives in Georgia with her mountain biking, marathon running, photo taking husband and two energetic kids. Besides being a mom, Amy loves working with her "other kids" in her career as a speech-language pathologist. She is also the blogger and storyteller for [email protected], a non-profit that promotes and celebrates female-led innovation. Amy typically spends her free time reading, writing, drinking way too much coffee and making it to the occasional yoga class