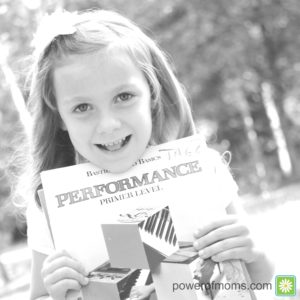 I, like many of you, was a third grade, piano school dropout. I can’t remember exactly why. Perhaps it was because my sister and I were also playing softball or doing some kind of dance practice. For whatever reason, my mom simply said we couldn’t do it all and had to choose. Athletics won.

However, I always regretted quitting piano. And, like many, I have often said aloud, “I wish my mom would have made me do it.”

Years later, as a mother of three children who are 10, 8, and 5, I can respect my mom for this. We can’t do it all, and I admire her for being courageous enough to pace herself and to know her own limitations. It’s something I’m still trying to learn from her.

When I entered college I had a desire to learn the piano again. There happened to be an abundance of talented musicians at the university I attended, so I sought out roommates and friends to teach me. It was a marvelous experience and richer because I really wanted to learn—and I paid for the lessons myself.

Five years later, after getting married and before having our first child, I found another teacher and took lessons again. This time, learning was slower, because life was busier, and I found myself again wishing that my mother had not let me quit.

Fast forward ten more years. I now had children of my own whom I enrolled in piano lessons at a very young age. Eventually we moved to an area where piano teachers were scarce and very expensive, so I decided to tackle their teaching on my own, simply riding the coattails of their wonderful teacher before and continuing the pattern she had set. Teaching them, I began learning more myself and eventually started giving other children beginning piano lessons.

One frantic Sunday, just after a natural disaster had passed through our area and many of our fellow church members were not back in town, I received a phone call from our ecclesiastical leader.

“I know this is last minute, as in church starts in half an hour,” he said. “But would you be willing to play the piano for us today? We will sing anything you want to play.”

I agreed. After all, how hard could this be? I’d been playing more at home and could take my simplified version of the hymns with me.

Well, let’s just say that we skipped singing a closing hymn, “due to time.” I went home with my head hung down. I had completely botched the second song I’d played, and even my nine-year-old daughter said, “Mommy, you should have let me play the songs!”

She was right. And yet, for some crazy reason, I was determined to try again. I sent a message to our ecclesiastical leader after church and told him that I planned on practicing more that week and would be happy to play again the following Sunday if they needed it. He let me (they were desperate), and the congregation was able to sing the songs!

It wasn’t until after this experience that I realized why I had such a fierce determination to conquer this skill—through college and marriage and kids and all the busyness of life.

It was my mom.

What I had forgotten was that while we were taking piano lessons as little girls, my mom was also taking them, trying to learn for the first time. She took a couple of lessons and then taught herself to play. One of my favorite childhood memories was standing behind my mom while she played at the piano on Sunday afternoons. As she played, I would sing, and I simply loved the feeling of us being in harmony.

I also remembered her playing in church occasionally, and so I asked her about it after my own church playing experience.

“Oh yes,” she laughed. “I played because they were desperate! I remember the bishop asked the whole congregation to pray for a pianist. Finally someone moved in who could play, and I was so relieved!”

“That’s funny,” I replied. “I don’t ever remember you messing up.”

It wasn’t until then that I realized my mom didn’t make me quit, nor did she make me play, she inspired me to play. All through my growing up years, I had watched my mom try new things—piano, tennis, snow skiing, art, wood working—all for the first time. She showed me that you’re never too old to try something new, and that even when you mess up, you just keep on playing through.

QUESTION: What are some things you didn’t realize that you learned from your parents or other family members until later in life? Think back on their lives and their unspoken examples.

CHALLENGE: Is there something you’ve always wished you had learned? Write it down. Make a long-term goal, then write one small thing you’ll do to move in that direction. You may only tackle a little at a time, but you’ll grow from the experience, and so will your children as they watch you.

Edited by Nollie Haws and Kimberly Price.
Image provided by the author.

A seventh-generation Texan, Kristi graduated from Brigham Young University with a degree in creative writing. She and her husband have had an adventurous 15 years of marriage, which has included ten moves, six U.S. states and three beautiful children. She is ever-grateful for his ever-listening ear and companionship. Aside from Latin dancing, her favorite pastime is reading aloud to her kids. She currently resides in Miami, FL.