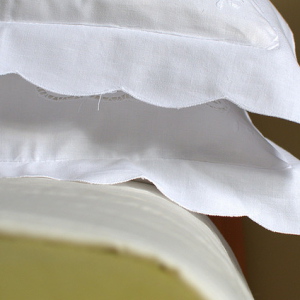 Some memories are more vivid than others. I have one that comes to my mind frequently since it happened almost ten years ago. At the time I didn’t understand how important the moment was, but now I can see why I’ve remembered it throughout the years–it taught me a great lesson that I needed to learn; that of owning my choices.

It was during one of the hardest years of my life. My husband was a surgical resident, spending up to 130 hours a week at the hospital (yes, a week!), I was the president of the girls youth program at our church and in the thick of preparing for all the big summer camps and conferences, I was teaching piano lessons and participating in a mom run preschool, our cute little first home was turning out to be a money pit for which we had no money or expertise to repair, and I had two small children–one just a baby who was very demanding in his own little way. Looking back, I was also probably suffering from postpartum depression along with everything else, or because of everything else! It may not seem like much to the moms out there enduring more serious challenges, but I was really having a hard time keeping it all together.

During a particularly hectic week, I had a meeting at my house for the leaders of the girls youth group. My baby boy was supposed to be napping during the meeting, but he was too fussy and wouldn’t go down. I remember feeling extremely stressed as I stood beside the kitchen table, jiggling him in my arms while trying to conduct the meeting. One of the women there was a seasoned mother that I looked up to immensely (five kids out of the nest), and she asked if she could take my son for me, suggesting that he probably couldn’t fall sleep because he could sense my stress. I felt relieved and was happy to let her hold him.

That’s when I started complaining about all the things that were “making” me feel stressed, from my baby that wouldn’t sleep, to the mold in my basement, to my husband’s schedule. And that’s when she said something that I really needed to hear, even though I wouldn’t be able to fully accept it for years to come: “Well, you made your bed, now you have to sleep in it.”

Immediately my defenses went up. (FYI–this reaction is usually a red flag that there is some truth to whatever you just heard.) What was she saying? It was my fault my life was so crazy? How rude! I felt like it was easy for her to be an armchair quarterback when the only person she had underfoot was her husband, and she was most likely running on a full night of sleep. Boy, did that bug me.

Of course, it’s obvious why her words bugged me so bad. She was right.

I could have held out for an older man who was already established in a career that required less hours, a man who could immediately provide me with a new house and all the trimmings, but I chose my husband.

I could have used my Sundays and other free time for recreation, errands, or home projects, but I chose to be active in my church and give of my time to help the youth.

I could have continued to rent a modest apartment rather than buy an old fixer upper, but I chose to buy that little money pit.

I could have waited to have children once my husband was done with his training when there would be more time and money, but I chose to have my children while I was young.

She was right. I had made my bed, but now I didn’t want to sleep in it. At the very least I wanted to gripe and complain about how lumpy it was!

It’s not easy learning to accept responsibility for your life, especially some of the more difficult parts of being a mother. Even though most mothers chose to have their children, many end up feeling a sense of resentment due to the sacrifices required, and indulge in whining and complaining when things don’t turn out as expected. No matter the age of the mother or her previous experiences, nothing really prepares a woman for both the loss of personal freedom and the immense sense of responsibility that accompanies motherhood.

Think about it. As children, we were relatively free to do what we wanted, and our parents, teachers, and friends were always to blame for whatever misery we perceived we were going through. The college years changed that to a degree as we learned to live on our own for the first time, but there were still professors and roommates to blame if things got too stressful. In the work world, our bosses, employees, clients, or co-workers were the cause of our grief on a bad day.

But then there is motherhood. Who can we blame when the going gets tough? Our husbands? That’s always an option of course, but we all know what that does for marital harmony as well as the nurturing atmosphere we are trying so hard to create for our children. Who is left then? The children.

Generally speaking, none of us likes to admit the part we play in our own misery, so we are often on the lookout for a scapegoat. As a result, women who had the habit of passing the buck B.C. (Before Children) will most likely point the finger of blame at their children as the source of their frustration. But the sooner we can own our choices and take full responsibility for the life we have created, the sooner our children can feel like they are the source of our joy and not our frustration. Perhaps even more importantly, the sooner we can be at peace as mothers and start to make progress even in the most difficult of circumstances.

As we explore The Power of Intention this month, we will be encouraging mothers to “mother on purpose” and to act deliberately. I believe the first step in this process is to remember that we chose to be mothers, and then to own that choice in it’s entirety–no matter what ends up being in the complete package.

As counter intuitive as it seems, owning your choices is extremely liberating. When there’s no one else to blame for what’s going on in your life, there’s also no one else responsible for your happiness! You alone can determine the direction and quality of your future life as a mother.

In other words–you get to make your own bed and sleep in it.

QUESTION: Which choices are the toughest for you to own?

CHALLENGE: The next time you catch yourself complaining about your children or certain situations “making” you crazy, try to identify what part of the equation is really your responsibility and take control of that part.