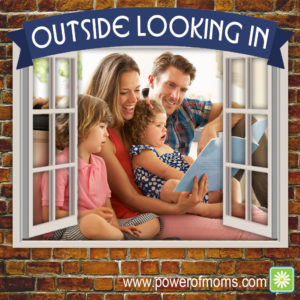 It had been a particularly difficult week for me as a mother with several young children at home. As a result, I had fallen into the rut of shouting orders until my voice was literally sore. My week hit a low point when I found myself wondering if one of my children, who was going through an especially difficult phase, would have any success in life.

One evening as I left our home to attend a religious event, I found myself feeling defeated and angry about my lack of patience, which I desperately needed. At the event, my mind was full of questions and thoughts on what I was trying to accomplish with my family and what I was doing wrong. How had my sincere desire to be with my children and positively influence them become so negative the last couple of days?

After the meeting, I felt refreshed and ready to return home. The little time away had given me some perspective, and I returned home ready to hug my babies. But as I got out of my car and headed toward the front door, I feared that my good feelings would wear off as soon as I opened it– that the chaos and struggle would again envelop me.

As I walked past our large front window, I could see that the whole family was in the living room together, except for the baby who had gone to bed. I stopped for a minute to look inside as an unseen observer. On one couch, my daughter was cuddled up in a blanket looking sleepy and cozy. On the other couch, my husband was reading a Harry Potter book to my oldest son, who sat next to him. My eight-year-old son was occupying the sliver of space on the couch next to them looking at some pictures in another book. My three-year-old son and four-year-old daughter were playing made-up, giggly games of tag around the room with each other. And my six-year-old son was alternating between listening to the story and playing with the younger kids.

I stood there, unnoticed, sort of pretending that I was looking at a family I didn’t know personally. I tried to take in my first impressions. As I looked at their faces, I saw happiness. These were happy children! I saw peace, love, learning, and belonging there. I realized as I viewed the scene for a couple of minutes that all those little struggles I had been having were moments. This was the big picture. And when I looked at the big picture, I liked what I saw.

QUESTION: When things get overwhelming as a mother, do you ever take a step back and look at the big picture of your family?What are some of the things you like from that view?

CHALLENGE: This week, take time to look at your family as an outsider would. Take time to see some of the positive things that are happening in your family.

Pricilla is a mother of 8 children who is used to being told "You have your hands full!" wherever she goes. Her family is her greatest adventure in life so she just smiles and says, "Yes, I do!". She loves to blog, learn, take pictures, dress cute (at least once a week), but she mostly loves seeing life through her children's eyes. She believes that motherhood is challenging, refining, and fulfilling. She blogs at Living in the Moment