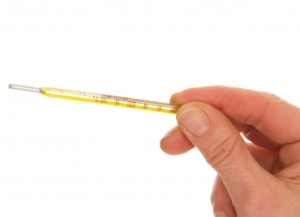 It’s a well-recorded and bemoaned fact that mothers don’t get sick days. In this profession, if I were to check out for a day to nurse a sub-par body, 1) chaos would ensue and, 2) number 1 wouldn’t even have a chance to happen because the small humans for whom I work would not let me nurse a sub-par body. So prevention is the only defense I have–once the illness hits, there’s no giving in.

I’ve wished for sick days — or just prayed that the little ones would miraculously sleep 20 out of 24 hours — all through the first trimesters of my second and third pregnancies. But last week, wishing and praying turned to action as I was hit with a late-season stomach flu. By five o’clock in the afternoon, after a day of school runs, play time and errands with the toddler, and feedings, naps and diapers for the baby, I found myself crouched next to the tub where my kids were bathing, gasping in pain as I dialed my husband’s work number.

“If I were in labor, I’d be asking for an epidural right about now,” I panted into the phone. “Could my appendix be bursting? Gall bladder? What else is in there that could be exploding?”

“I think you should go to the emergency room,” my husband suggested.

It’s every mother’s wish just to drop everything at five o’clock on really any given afternoon and run out the door, but it’s easier wished than done. But as my pain worsened, I did what I’ve never done before: I asked for help. I called my Visiting Teachers (my “assigned friends” from church) and fled. The kids were still in the bath, unfed, but I knew they were in capable hands. I called a cab and directed him to our nearest hospital.

I was checked in quickly, asked my pain level at which point I repeated my line about an epidural, and asked if I was pregnant. I gave a confident “No”, since fear of more small people in my life had prompted me to take a pregnancy test that morning with the flu’s onset. I sat down in a plastic bucket chair, hugged my knees to ease the pain, and waited.

I waited and waited. After two hours, I asked the nurse at the desk how many people were ahead of me. Five. As I waited, the crowd in my Brooklyn neighborhood hospital’s emergency room got more and more colorful. I realized at about 9 p.m. that the emergency room was a nighttime haven for some of the area’s homeless or more needy residents. The characters going in and out of the bathrooms motivated me to keep my stomach contents within myself so that I wouldn’t have to go in there after them. In an effort to avoid an older man in a red bomber jacket, wandering between the rows of chairs and talking to himself, I shifted over to a seat in the corner of the room abutting the vending machines. That positioned me perfectly around 10:00 p.m. to witness a young man in a wheelchair dramatically fall out of his chair and start writhing on the floor in an apparent effort to retrieve something from under one of the machines. For the first time in four hours, I unclutched my knees long enough to hobble over to the nurse’s station.

“Excuse me, but I think a patient has fallen out of his wheelchair,” I interrupted the nursely chit chat. Unexpectedly, the nurse rolled her eyes. “Oh, him!” was the exasperated response.

“C’mon, get up,” she prodded wearily, following me back to the man writhing on the floor. At which point, he looked up at the nurse, abandoned any seizure-like behavior, gave a disappointed sigh, did a pseudo-push up to hop up to a standing position, and plopped himself back into his chair. Well then.

At 10:30 P.M., more than four hours after I had arrived, there were still three people ahead of me. Although tempted to see what else the night crowd might have in store, I decided enough was enough. My stomach pain had subsided and sleep was what I needed most now. So I walked out the door, hailed a cab and went home so my sleeping children.

Initially I was angry about spending four and a half hours huddled against a vending machine, but it didn’t take long to realize that sitting still for that long — not finishing the baths, getting dinner ready, doing stories and songs, then cleaning up the kitchen and whatever else was pressing –was exactly what I had needed. I had given myself a sick day. Perhaps I could have chosen a more scenic spot, but I had achieved every mother’s dream: in the midst of the evening chaos, I had walked out the door and given myself four hours of doing absolutely nothing. And I came away healed.

QUESTIONS:  What do you do when you need to be healed? Do you have rejuvenation techniques that always work for you?

CHALLENGE: Get comfortable enough to ask friends or neighbors to help with your children so you can have some “me time.”

Neylan is mother to three daughters, Esme (5), Auden (3) and Dalloway (1). She grew up in New York City and majored in English at Yale. She and her family now reside in Brooklyn. Neylan is a writer whose work has been published in Newsweek, Dialogue: A Journal of Mormon Thought, Segullah, and BustedHalo.com. Her collection of personal essays, How To Be A Twenty-First Century Pioneer Woman, was recently published. Her writings can be found at www.neylanmcbaine.com.