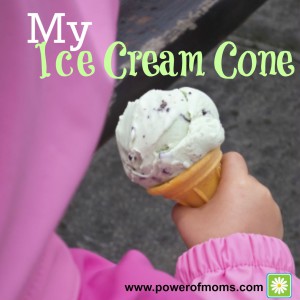 The squeal sounded like a car slamming on its brakes, except I was in the middle of a craft store and the squeal was all too familiar. I turned away from the rack of magnets and looked behind me. Just three of my four kids were there, all girls. This confirmed what I’d feared: that squeal came from my three-year-old son, Luke.

I found him just around the corner. He began yelling at me for not coming when he had first called me to see a train set. My calm explanation about appropriate behavior was met with  loud whining and complaining as we made our way out of the store. We’d had a busy morning of playing, picnicking, and hiking, so I understood he was tired. But so was I.

As we all got in the car, my own tired mind began to reel. I thought of every negative behavior he’d had lately, and I decided something needed to be done. If he could experience a solid consequence, maybe he’d learn.

Instead of heading for home, I drove to McDonald’s. I prepared myself for Luke’s crying the whole way home. I reminded myself it was going to help him become a better person. When the kids saw where we were, they started asking, “Could I have some ice cream?” I answered yes to the first two kids, but when Luke asked, I said, “Oh, honey, no. I wish you could, but you know what just happened.”

There was a moment of stunned silence, and then my oldest, Kate, said, “Oh, no! Poor Lukey.” She sounded like she was going to cry. Then Luke’s twin sister, Ally, said in her sweet toddler voice, “Mommy, wemember Lukey felled yesterday and hurt his head. He weally needs some ithe cweam.” Anna, my second born, chimed in with, “Lukey can have my ice cream.” And Kate said, “It’s okay, Anna; he can have mine.”  My eyes began to tear up from their sentiments. I didn’t know what to do, when I heard through the car window, “Welcome to McDonalds . . .”

I decided to order four cones. I wasn’t planning on having one, but I reasoned I could keep one depending on what I decided. This bought me time.  As we waited in the drive-through line to pay, I heard Kate and Anna planning how they’d each give Luke the top of their ice cream cone. Well, my plan had sure backfired. I never give in when a kid throws a fit about a consequence . . . but Luke wasn’t throwing a fit. But what if he only wasn’t throwing a fit because he was confident he had been rescued. That would be worse. But how do I tell these kids who I’ve taught to always share that they can’t give their brother any of their ice cream?

Darn, parenting is hard!  I decided maybe it would be okay if I pretended I was giving him mine; it wouldn’t appear like I bought him one. I said, “It’s okay, girls. I’ll give him mine.”

“No, Mommy; you’re tired,” replied Kate. “You need one.”  When I finally convinced the girls I no longer wanted mine, Luke quietly asked, “Can I hab chocolate?”

Are you kidding me? I didn’t respond.

Then, more decidedly, Luke told me, “Get you-self a chocolate one, Mommy.”

This little “beggars can’t be choosers” demand made me even more unsure of what I was doing. But then it occurred to me maybe this lesson, right at this moment, wasn’t meant for Luke; it was for the other three. And it was for me.

Obviously, Luke wasn’t going to experience the consequence in the way I had planned; his sisters had intervened. And I had to learn that this was okay. The “how to behave in a store” lesson had been taught before and would inevitably be taught again. Right now the lesson was about compassion.

My older two girls climbed forward in the van to grab the ice cream cones as I took them from the drive-through window. As I handed the cones out, they waited expectantly to see what I was going to do with the last one. I took it from the window and handed it back to them saying, “And here’s mine that I want to give to Luke.” Their faces lit up, a mixture of relief and love. I knew I’d done the right thing.

The best way we teach our kids is by example. For Luke, I was calm in the store, even when he wasn’t, and for my other kids, I would give up my ice cream cone, even if that wasn’t what I had planned.

My three girls had instinctively been compassionate, so I didn’t have to teach them how to show compassion. I had to show them, by my example, that sometimes compassion trumps other things–in this instance my plan.

What I had to learn that day was that, yes, follow-through is important with discipline because we want our kids to learn. But sometimes exceptions have to be made. We’re not just teaching our kids to act appropriately in public, to follow rules, to clean up after themselves, to be responsible about their work, and the like. More important than any of that, we’re teaching them to love fiercely and to live compassionately.

QUESTION: When have you let compassion trump other, less-important things?

CHALLENGE: Be open to changing your plans when you see an opportunity to show compassion.

Edited by Amanda Lewis.
Image from Shutterstock with graphics by Anna Jenkins.