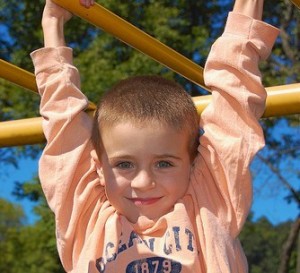 Have you ever been to a playground? Of course you have, you’re a mom. Some of us see the playground as a breather–a bit of a break.  Our children can go run and play and get out all the extra energy so they won’t wear us out later in the day. Some of us see this as a stressful situation. Your children are at that age where they want to try and do everything the big kids do and end up getting hurt in the process. You know they’ll have a fun time, but you also know a few tears might be shed.

My friend’s little boy, who’s four, decided he was going to play on the playground, and he wanted to be like the big kids. I bet you can you see where this is going?  He got on the swings and had fun–no problem. He went down the little slide–no problem. He decided to get on the monkey bars–PROBLEM.

As he was climbing up and down on the bars, he hit his forehead on the metal bar (and cried, of course). Who wouldn’t cry getting hit on the forehead with a metal bar? His mom kissed him on the forehead, consoled him for a bit, and encouraged him to go back out and play.

A little reluctantly, he did. He decided to go back to the swings because, of course, they were safer. Then he decided to go back down the slide because it was safer. After a while, he must have decided that if he could master the other two playground items, why not go back on the monkey bars?

As he climbed up and down the metal bars again–PROBLEM. Yep, he hit his head again,and in the same spot! This whole cycle replayed itself over and over again for a total of five times. It wasn’t until the fifth time that the little boy came over and said, “Mom, the monkey bars sure hurt.”  With a chuckle and a smile she said, “They sure do. But, are you having fun?”  With an ecstatic yes, he hugged her and ran back out onto the playground.

I started thinking that motherhood is like a playground, and sometimes we get hurt too. We hit those metal bars called childhood independence, and boy does it hurt.  Sometimes our patience wears thin, and sometimes it feels like we just can’t do it anymore. Then, without knowing it, our children console us with their little wet kisses and their squishy big hugs, and they make everything all better. It’s little moments like these that encourage us, as mothers, to go play on our playground again.

We decide this time we’ll get on the swings. We find ourselves swinging up and down with all the new emotions that come with having a teenager. We begin to learn how to move with the swing and to expect the ups and downs. We’re doing pretty good here, but before you know it, we end up getting on those monkey bars again and getting hit by the bar called teenage independence. Of course it can be frustrating.   We might run out of patience, and we might even shed a few tears. But again, the recovery process is the same. We interact with our teenager on a new level, bringing us closer to one another.  A hug is shared in a tender moment, and then it makes everything all better. We’re rejuvenated and ready to go back onto our playground again..

After several years of living with a teenager, we watch as they prepare for graduation and begin to move on to the next stage of their lives. We’re feeling good about what we’ve mastered on the playground so far. So good in fact, that we decide to get on the slide and then we realize the highs are REALLY high and the lows are REALLY low. Then we remember, we’ve  played on this playground before and we’re ready for it! We decide, we’re going to master this (motherhood). We’re going to get back out on the playground and get on those monkey bars! As we climb higher and higher, we realize we’re probably going to get hurt by these monkey bars again, but it doesn’t matter. Because no matter how painful motherhood might get, we will always have more fun on the playground then simply walking away.

QUESTION: What types of frustrations do you find yourself experiencing over and over again?

CHALLENGE: If you’ve had a tough day–or week–or month, resist the urge to give up, and get back out there

Married for 16 years to a wonderful husband. We have a 14-year-old daughter, Maddie. She is such a joy to have in my life. I also have a 12-year-old son, Sean, who makes me smile with his inquisitive mind about the world we live in. The best part of being a mom is the little things my children do to show me they love me and appreciate what I do for them. It might be toast in the morning, little notes, or just big hugs and kisses. In the end any and all of it just make me smile.