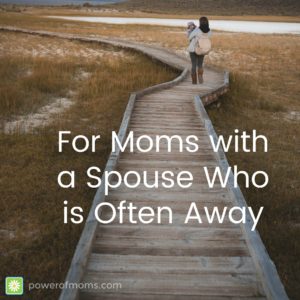 One of the most frequent comments I heard the year before my husband started medical school was, “Good luck being a single mom!” That comment rubbed me the wrong way every time. “He’s going to school, not evaporating from our lives. He won’t cease to exist after his white coat ceremony. I’ll show you,” were some of the thoughts usually going through my head.

At the time we had an almost one-year-old. Six years, four moves, one medical degree, and three additional children later, we are halfway through his residency and I have learned a thing or two. If I were to talk to a mom getting ready to embark on a similar path, I’d have a little more humility than my initial “I’ll show you” attitude, but I’m definitely still far from ever saying, “Good luck being a single mom.” Here’s what I’ve learned.

In summary, every situation has highs and lows. Remember that you and your spouse are team players and you each bring different skills to the playing field, and then grab some friends that will cheer you on from the sidelines.

QUESTION: Do you feel like you are often parenting alone? How can you create a positive attitude versus resentment?

CHALLENGE: If you have a spouse who is gone often, find ways to maximize your together time and create joy. If your spouse does not work as much, look for someone whose does and brainstorm ways to support her.

Photo by Marcelo Silva on Unsplash  Graphic by Anna Jenkins.