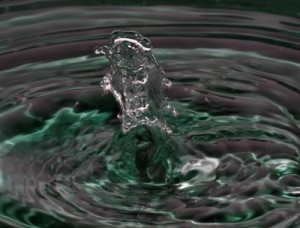 There were a lot of years when I thought I would never walk by the diaper aisle at the grocery store without stocking up. I was sure that the days of not being able to find the binky and the never-ending frustrations of doing those important “Star of the Week” posters for a child who just remembered at 10 p.m. that he had to have it by the next morning…would never end. I dreamed of the days that I would be able to sleep in instead of waking to that annoying alarm clock and dragging myself out of bed after only four or five hours of sleep because of a sick child or a fussy baby or finishing a project in those quiet hours after the house slept. Those mornings were full of urging kids over and over and sometimes not too nicely to get out of bed, to practice, to finish homework, to get themselves ready and put their dishes in the dishwasher instead of on the counter.

I hated the inevitable panic every morning of somebody not being able to find shoes when they were already late for school and the inevitable wailing over lost homework and sibling rivalry. I finally decided that I’d better get used to it because I could see no end! On the very hardest days, I promised myself that, if this ever did end, I would never forget.

Then suddenly, but also gradually (those empty nest moms will know what I mean) all those days did come to an end. Diapers, science projects, posters, chaotic mornings, babies who wouldn’t sleep through the night, little kids always in your face while I was one the phone, as well as teenagers with a crisis a minute and who came in late, came to a halt. Kids left one by one, came back one by one and left again for good…so far. I walked out of the trenches with a big smile thinking everything from here on in was going to be a piece of cake. Though many things did get a lot easier, laundry for example and less daily stress, I quickly learned that parenting never really ends…it just gets different and in many ways better because now, though I am back in the swing of changing grandchildren’s diapers, I don’t have to buy them!

Even though I do occasionally get to sleep in and don’t have to worry about science projects and kids climbing out of the carts and knocking the displays down at the grocery story, life is still stressful. But it’s a different kind of stress. There is always a child who is worried about one of their children, one who is having a hard time finding “the perfect partner” to marry, another who is worried about a horrendous situation with a lawsuit over which he has absolutely no control. Indeed when the kids leave home, stress becomes different and things get bigger.

Let me explain what I mean by bigger. All of our children live far away from us so we have loved being able to get them together during the month of July at a place that we love and where I happened to be born and raised–Bear Lake, Idaho. We have six married children all who live in hot muggy places in the summer so we are truly blessed to have the moms come to Bear Lake as long as possible during July (different years, different amounts of time). It is so fabulous to have a time to talk with grown daughters and incredible daughters-in-law and to watch the cousins interact, to observe sibling rivalry and even cousin rivalry without being in charge of the resolution and to watch with delight, the comings and goings, strugglings, disciplinings, weepings and wailings…without feeling stressed about having to figure out how to solve the problems.

At some point in the month all the dads and singles join us for four days of wild fun and complete chaos! The details surrounding such a gathering are mind-boggling. Last summer from July 1 we had from 20 to 36 people at our house at Bear Lake every day. During the four days of our reunion we had 33 men, women and children for three meals a day (this included 17 kids, 11 and under). When the dads went back to work, aunts, uncles, cousins and friends filed in. Because it was an hour round-trip drive to the nearest grocery store, we had brought food in by the truckload! In a ten-day period we figured that we served about 840 meals!

Of course it wasn’t all about food. It was also about sand castles, horse rides, blowing bubbles, long talks on the beach and watching the kids dig enough holes in the sand to reach almost to China if they were all strung together.

In addition it was also about throwing up and diarrhea. Every year we have some sort of “bug” going around. From one room would come a blood-curdling scream from an eighteen month old with a bottom that looked like raw meat after several days of “the runs”. In the laundry room where one of the two and a half year old twins slept, there was throw-up, luckily over the edge of the “pack and play” and onto the slate floor.

Those incredible moms who were up all night with children spewing out one end or the other and arose exhausted but loving those kids all the more. They cleaned up endless piles of Cheerios and spilled apple juice, accounted for up to five mouths to be fed before they put a bite into their own and did so without a murmur. All day they helped resolve conflicts and prepared food when it was their turn. They bit their lips (only occasionally “freaking out”) when dealing with a child at an annoyingly stormy stage! There was a certain amount of angst from the mother of the twins, when one little renegade escaped unnoticed and reaching up as far as his tippy toes could take him, meticulously colored the outside of the new white family mini-van with an orange crayon. As promised, I had not really forgotten about how hard motherhood was but it takes being thrown back into the daily crisis routine to help me thoroughly remember.

Through all the craziness, I stepped back and was absolutely amazed that after all those years of parenting, I was watching my own children be parents. What a delight as well as a responsibility as I learned that almost nothing is more important than keeping your mouth shut when you would do things a different way!

After it was all over and looking through about two thousand digital pictures of our precious few days together (we have five quite amazing photographers), I chuckled at the sometimes smiling, sometimes howling children’s faces and couldn’t help feeling the joy of the moments captured in those pictures full of light and love (and just a little bit of diarrhea running down one little leg) and I thought of what an amazing journey motherhood is. Yes, some days “motherhood is like being pecked to death by a duck” (an anonymous quote my sister has hanging in her hall) but the secret is that, eventually, your efforts will start to count. Sooner than you can realize now, you’ll be watching your children having children and will be amazed at how much better they are than you were and that somewhere, somehow, you must have done something good!

QUESTION: Do you often find yourself feeling like the stage of motherhood you’re currently in will never end? How do you find perspective?

CHALLENGE: Please add to this conversation by adding your comments below.

Image by Paul Brentnall at www.freedigitalphotos.net.