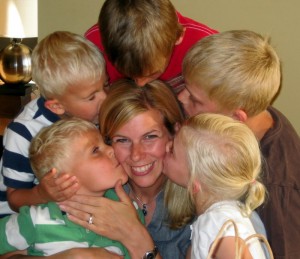 I just read a very interesting article in the New York Times called “Fear (Again) of Flying” by Judith Warner.  The article talks about how so many women in the 1970’s wanted OUT of traditional roles that felt restrictive.  They wanted to reach higher and expand their horizons and create new possibilities for themselves and women in general.  And they did.  Sometimes it worked out for them.  Sometimes it didn’t.  Many mothers and wives left their kids at home and sometimes even left their husbands as they set out to “find themselves.”

Our generation, on the other hand, seems to be going a whole new direction in attempt to “find ourselves.”According to the NY Times article, this generation is “striving, through exquisite new adventures in internal fine-tuning, to feel more deeply, live more meaningfully, better inhabit each and every moment of each and every day.”  There are a whole slew of books that have recently come out that chronicle this evolution of what it means to find ourselves — “Dani Shapiro’s yoga-infused “Devotion,” Melanie Gideon’s “Slippery Year,” Gretchen Rubin’s “Happiness Project,” Katrina Kenison’s “Gift of an Ordinary Day” — in which the trope of female midlife rebellion, the go-out-and-find-yourself exhortation that has floated in the popular imagination ever since “Passages” put the phrase “midlife crisis” on the cultural map, is turned on its head.”

In these new books, “there are no Isadora Wings (she was the heroine of Erica Jong’s 1973 liberationist novel “Fear of Flying”), no good little wives poised for naughty takeoff into the exciting wider world. There’s no chafing at the ties that bind to home and family. Instead, there is a deep desire for rules and regularity — a dream of order and contentment and beauty.”

“Making a home is re-encoded as a privilege, an accomplishment, even a form of freedom from the burdens and demands of the larger world.”

I’m proud to be part of a generation that is taking the best of what women have historically sought after and creating identities that pull together domesticity and ambition as we strive to be the best we can be INSIDE the roles we’ve chosen to embrace as wives and mothers.  We can find self-liberation through deciding to tie ourselves firmly to the things and people we love – and deciding to explore and express our own unique talents and interests as PART of what we do for our families.

Maybe this resonated so much with me because the points it brought up totally confirmed what April and I have been striving to communicate through our website, The Power of Moms.  Motherhood isn’t just about getting the kids fed and where they need to be and giving them some love and encouragement along the way as they move towards adulthood.  It’s also about US – about OUR personal development.  It’s about us growing in patience and love and organization and acceptance and so many other areas as we grow through the experiences motherhood has to offer.  Joyful, deliberate motherhood is about us looking inward and finding who we and our families really are and who we really want to be – then figuring out how to continue and expand the process of becoming through the experiences of every ordinary day.