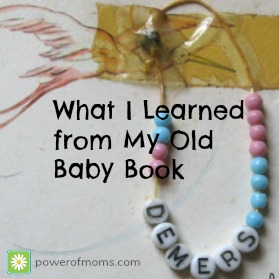 Years ago my mother visited me. With fanfare she rarely called into action, she said, “I brought something for you.” She pulled my baby book, old and worn, out of a plastic supermarket bag. I could tell she had planned a little ceremony surrounding the hand-off. I tried not to show it, but I was not pleased.

She was being practical. My mother was always practical. She said something about not wanting it to get lost, and then her voice trailed off a little.

She was talking about a time when she and my father would no longer pull up in front of my house and stay the weekend. She was preparing for a future when we wouldn’t be able to gossip at my kitchen table over a glass of wine or catch up on what my kids were up to.

I didn’t like it one bit. I wanted the book to stay on the shelf at her house, where it had always been. I didn’t want to be the grown-up in the family yet. That was her job.

But I took it from her that day. And now that baby book lives on my shelf, along with the other three baby books I wrote in (the third one sparingly, my third-born would tell you, rolling her eyes). I don’t know when their books will get shuffled off to their homes. Not yet.

I haven’t opened mine in a long time, but I did today. We had a new baby born into the family last week, and every time that happens, it seems like a good time to revisit it. And every time I do, I learn a few things I’d overlooked before. 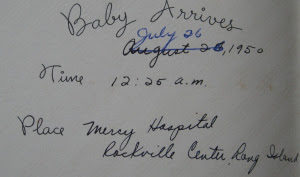 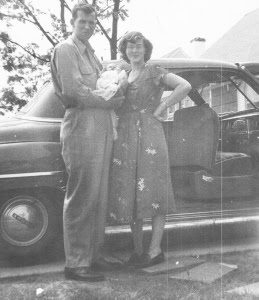 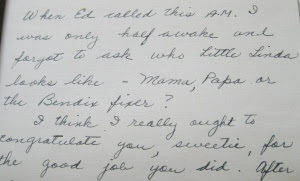 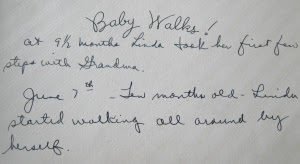 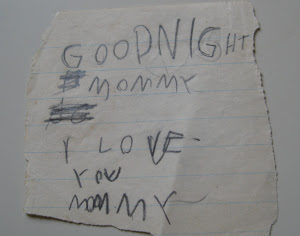 When I open the baby book, I study her quirky handwriting. I picture the exhausted young mother at 22, thinking she’d better write down what happened that day. Maybe even back then she was thinking that someday, far in the future, I could read it and know the little bits of my history that only she knew.

I wonder if she realized I’d hear her voice again, too. I’ll bet she did.

QUESTION: What mementos do you treasure from your childhood?

CHALLENGE: Designate a box or file folder to collect items/memories for your children to look back at as they grow up.

Linda DeMers Hummel is a Baltimore-based freelancer who has been writing about motherhood since her three children were tiny. She is now the grandmother of eight and is still finding new and surprising writing topics in the course of any given day.