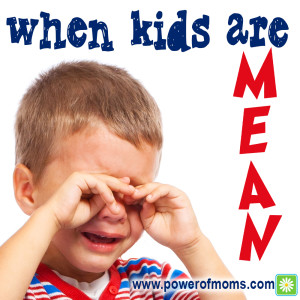 “You can’t sit here.” “You are so slow!” “You’re stupid.” “Your shoes are weird. The laces are broken!” That last one is my personal favorite. It was said to my seven-year old son, Josh, who promptly made me get him new laces.

In Kindergarten, Josh was the new kid. We had many chats about how it’s okay to be shy, but it’s more fun when we’re not. On the playground he spent several weeks watching the other kids play “dragons.” Every day he would come home and tell me he wished he could play. Every day I told him, “You just have to ask. They’ll probably say yes.” Finally, he did ask. They did say yes–followed by months of happy recess time and new friends. I felt like a fantastic mother.

Then we hit first grade. He was no longer the new kid; he had two friends from our street in his class. I wasn’t even worried. But in first grade it is no longer just the little kids on the playground. Suddenly there were lots of bigger kids around–and lots of insecure kids jockeying for position and the right to be “cool.”

The first couple of weeks were rough: he was unable to find any familiar faces amongst the kids at recess and then was called countless names; he was told he couldn’t play, couldn’t sit with people at lunch, and couldn’t run fast enough. He even had two good friends exclude him from a secret club. I was appalled.

Josh is athletic, smart, funny, and has lots of friends that he plays with regularly.  But he is also quiet and kind and won’t fight back. He even hates when I listen to talk radio because they “talk mean.” I watched all of this bullying happening with an aching mother’s heart, and I pondered what to do.

I told my son I would find the kids and sit on them–and then fart on their heads. But that didn’t seem to be the best option. So what can we as parents do when others are mean to our kids? How do we give them the confidence they need to not let the criticism pierce their hearts?

If it is a serious case of bullying, we should of course get teachers and other parents involved, but I think a lot of times kids need to work things out themselves–or at least try to with varying degrees of support from parents.  Here are some suggestions that helped us through the process:

1)   Know Your Child: Of course we want to jump to the defense of our child; but it is important to remember that there are different personalities and two sides to every story. In Josh’s cases, I knew he was quiet and sensitive and would take any teasing personally, even when another child might blow it off. Knowing your child will help keep things in perspective and help you know when the problem is serious enough to warrant your involvement.

2)  Build Confidence: Remind your kids frequently of their strengths. Make sure they know who they are and that they have worth, no matter what anyone tells them. Give them opportunities to work out issues with peers whenever possible so that when a situation comes up and you aren’t there, they will have confidence that they can handle it.

3)  Don’t Hold Grudges: I of course automatically dislike any child that hurts mine in anyway. But there are some things you can change (yourself, your attitude) and some things you can’t (others). People will do and say stupid things, intentionally and unintentionally, and I had to learn for myself, and also teach my son, that sometimes you just need to let it go.

4)  Offer To Help: Ask your child if there is something that they want you to do to help with the situation. Usually they will say no, at least initially, but knowing the option is there can make them feel safe.

5)  Role Play: This gives the opportunity to talk through all of the actions, both positive and negative, that your child can take in response to being bullied.  You can then discuss how he/she would feel and what the consequences would be in each scenario before he/she has to make the decision on the spot.  In the case of Josh’s two good friends excluding him, we decided he had several options:

6)  Set the Tone: It is so easy for a mother to escalate or de-escalate a situation. You can flip out and say, “That’s horrible! Why would anyone do that to you?!” Or you can calmly say, “That’s too bad. Were you upset about it? Do you think ______ was having a bad day? What do you think you should do about it?”

For example, my sensitive boy got into the car after swim team practice last week. I could tell he was upset and he said, “Mom some kids were making fun of me because I swim faster than them.”

To which I replied, “That’s fantastic! You must be doing awesome!”

After our brief conversation he was grinning. If I had said, “I’m so sorry, Honey,  that’s really mean.” It would have grown into a big deal in /his head and could have resulted in him being nervous to go to practice.

7)  Give Them Perspective: “Mean” happens to everyone. Share stories about your experiences. It can change their outlook. Discuss why the other child might have been mean.

We have so much power as moms! We can instill confidence in our children and give them useful tools so that unkind words don’t “pierce their heart.” I use the visual of an arrow bouncing off their skin.

So although watching your child face unkindness from his or her peers can be heartbreaking, there are ways that we as mothers can help them navigate the harsh realities of the world–and we and they will come out stronger, more resilient, and closer to each other as a result.

QUESTION: What can you do to better equip your child to handle a “mean kid” situation on their own?

CHALLENGE: Think of something you can do to build your child’s confidence every day.

Edited by Elsje Denison and Rachel Nielson.
Image from Shutterstock with graphics by Julie Finlayson.
Originally published on March 5, 2015.

Nicole is a travel-loving mother of 3 amazing children. She grew up largely in the Middle East and the wanderlust has never left her. She drives her children crazy with talk of all the places they will someday go together. Nicole is married to a surfer/entrepreneur from Idaho (they spent their first married years in L.A. - hence the surfing). He is okay with her travel obsession as long as most trips involve a beach. She has her B.S. in Audiology and Speech Language Pathology; loves to read, learn, take pictures (not necessarily good ones) of her kids, and write. She blogs about finding joy at Real Life Real Joy .