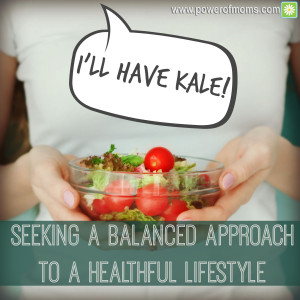 I’ve been occasionally called a hippie since I was in my teens, but I started to really earn the label when I had kids. Over time I have switched from most mainstream products in favor of supposedly healthier versions, often to my husband’s chagrin. Years ago, when I decided I would bake all our bread to avoid the preservatives in store-bought bread, he declared, “You have a real knack for solving problems we don’t have.”  Recently I’ve begun to think he may have been on to something. It seems like I’m finding “problems” everywhere. And in the process, I’m driving myself, my kids, and those around us a little crazy.

Last weekend, we were hanging out with my friend Jenny when she got out some juice pouches for all the kids. She said, “I only buy 100% juice now . . . because of you. Now we know it’s healthier.” Even though she said it kindly, I was embarrassed.  My embarrassment only deepened when my seven-year-old daughter said in response, “Then why do you still use sunscreen with dangerous chemicals in it?”

I was mortified! It probably seems like I go around commenting on other people’s juice or sunscreen, but I don’t. In fact, I’m actually a little envious of people who don’t obsess about these things.

The only reason my daughter knew the term “dangerous chemicals” is because my husband, Dave, jokes about it. When we first switched to rub-on sunscreen, he used to grumble about how much longer it took to apply than the spray kind. I would teasingly tell him, “Well, if you prefer to spray our beloved children with dangerous chemicals . . .” Then when the kids, impatient to wait the 50 hours or so that it takes us to smear them with sunscreen, asked why they couldn’t get sprayed with sunscreen like other kids, Dave, teasing me, told them, “Mommy doesn’t like all the ‘dangerous chemicals’ in the spray kind.”

But it’s not just the sunscreen or the bread or the aspartame worrying me. Ever since I was first pregnant, I can’t feed my family anything without second guessing myself. Being responsible for another life is often motivation for people to make healthy changes in their lives, but for me it created a slippery slope to a state of anxiety. Let me explain:

I’ve been on a decade-long quest to feed my family the most healthful diet possible. The problem is, this is virtually impossible. Not because of picky eaters or lack of time to prepare food, but because I can’t figure out what the most healthful diet is. The more I’ve read, the more utterly confused I’ve become. I began by cutting out food dyes, chemicals, and preservatives, but that proved to be the only change that is generally agreed upon in the world of health-seeking people.

I read that veganism was the best way to avoid obesity, heart disease, diabetes, and cancer. So I converted to a vegan diet. But only until I began reading about the paleo diet, which contends that the abundance of carbohydrates I was feeding my family on the vegan diet was going to lead them to develop obesity, heart disease, diabetes, and cancer (do those four things sound familiar?), as well as issues with brain function.

I tried embracing the paleo diet and stopped making the now-prohibited, homemade bread. But I couldn’t help wondering if the vegans were right. All the fat we were now eating might guard us against brain diseases, but would we die of a heart attack before we were old enough to develop Alzheimer’s?

Then I decided maybe I could do both! Maybe we could be some kind of paleo vegan mash-up and avoid the things that either of the diets said were bad. We could skip the meat, but get more protein and fat from nuts and avocados. We could eat fewer carbs by cutting out wheat and grains and eating less fruit, but eat more vegetables, especially greens. This plan was quite an undertaking, because we were mostly left with nuts, avocados, coconut oil, and kale. At least I felt that everything I was feeding my family was best for their bodies. Right?

I wanted to solidify what I was doing, so I consulted with a naturopath. She referred me to The Blood Type Diet. From that I learned that people with type O blood—which is everyone in our family—shouldn’t eat avocados, coconut oil, or certain nuts—three of the four foods I had decided were perfect. I was utterly exasperated.  This left me with kale. I don’t even like kale. But I made a lot of it. I began to incorporate kale into a meal just about every day. Then recently I read that too much kale can lead to hypothyroidism.

After a few days of rebelliously indulging in ice cream, because why the heck not? It’s just as healthful as kale! I decided that I had to end my decade-long search for the nonexistent. There is no one perfect food, and certainly no perfect diet. And there is no one perfect sunscreen and no one perfect bread. As I’ve learned in many other areas of parenting, there is rarely a perfect answer. We do our best and try to find a way that works well for our own kids and our specific families.

We all want what’s best for our families, but I finally see that what’s best for them isn’t perfection—not in our diets or in any area. Not only is perfection unattainable, but the quest for perfection can be unhealthy in and of itself. Instead of trying to guard my family from every possible chemical in the world, I’m going to begin what may well become a decade-long quest for a balanced approach to life.

At the very least I’m going to do my best to quit solving problems we don’t have.

QUESTION: How do you maintain balance in your family life and parenting?

CHALLENGE: Evaluate your efforts to be healthful or improve another area of your life. Is your approach balanced? What’s one thing you can do to remove stress from your efforts?
Edited by Amanda Lewis and Sarah Monson.
Image from Shutterstock with graphics by Julie Finlayson.