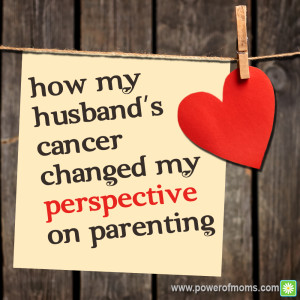 When the May 2012 Time magazine ran a story on attachment parenting, along with a cover photo of 26-year-old Jamie Lynne Grumet nursing her three-year-old, I could relate. Not because I ever looked as hip as Jamie, but because I, too, had practiced attachment parenting, extended nursing, and the family bed with the majority of my eight children.

Still, coming out on the other side of raising children, I cringed a bit at both the photo and the story–not because attachment parenting is inherently bad, but because taking it to an extreme had harmed my marriage.

When I read the article, my youngest was then eight years old, and my oldest was thirty-two. I paused for a moment and asked myself, “If I could begin my mothering journey all over again, would I make those same choices?” I pondered this even while I allowed my youngest to crawl into bed with me– which I had let her do ever since the day her father died.

Bathroom door locked? Or unlocked? Reflecting back now on thirty-four years of parenting, I’ve considered the possibility that even more than the extended breastfeeding or the family-bed policy, the bathroom door had been the symbol of what kind of mother I became.

For the majority of my mothering years I’d adopted the unlocked bathroom door policy, willingly allowing myself to be immediately and wholly available to my children every second. Whether it was for showering or for “other,” I left the door unlatched, basically inviting my toddlers into what would have been a private domain.

During those days of parenting young children, it often felt like I had no other choice. It was either be alone in the bathroom with a locked door, my stomach cramping in response to screaming and pounding from the other side, or allow open and easy access to mommy at all times. If I so much as relaxed in a bathtub full of bubbles, a toddler inevitably came running, gleefully stripping off their clothes on the way and jumping over the side of the tub with flailing arms and legs, splashing water on the magazine I was reading.

Though the decision to leave my bathroom door unlocked may seem minor and inconsequential to an outsider, this type of open access to Mom led to a sense of entitlement in my children, spilling over into other areas and spaces of my life. Children congregated in the kitchen, clamoring for a drink as I cooked. Toddlers clung to me at the door, crying in anguish each time I attempted to escape for a lone walk. I’d become a “martyr mother,” immersing myself completely in the vocation. 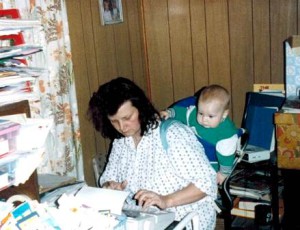 How Mary fit creativity into her life during those early years of parenting.

How did I become a mother that never left her children? A mother with no personal space? I was a college student when I had my first two children. While I would occasionally lay down with them for naps, they both slept in a crib at night and weaned on their own before their first birthdays.

Our third baby, however, was a mother’s nightmare. Literally. By day, his temperament and personality was angelic. He rarely even cried. For the first few months I thought I’d hit the perfect baby jackpot.

Then when sweet little baby Michael started teething around four months of age, he transformed into a night monster. He’d sleep for less than two hours after his evening feeding, and the night-time Olympics would begin. Michael tossed and turned, crying out, then screaming inconsolably until I lifted him out of his crib and started rocking. Rocking in a rocking chair or dancing around the room were the only things that worked to calm him. I tried everything else: Tylenol for teething pain, shorter naps during the day, and even attempts to bring him into bed with me. In response, he’d arch his back stiffly and scream until I resumed rocking or pacing.

I rocked him so much I actually broke a rocking chair one night in a particularly harried frenzy of movement. I was Michael’s nocturnal dance partner, his human pacifier. I rubbed his little tummy and took him for car rides in the middle of the night. There were many times I’d just give up on sleep and the pair of us would end up at a  24-hour restaurant, with me sipping coffee and studying for a college exam and him smiling happily, eating buttered toast, and sliding ice cubes back and forth across the shiny tray of the high chair.

Doctors just shook their heads and looked at me in disbelief when I toted this healthy, happy baby to their office with my complaints. The nightmare lasted for a good twelve months. Michael began sleeping better during my next pregnancy, waking only once a night by the time his sister Rachel was born.

By then, I was so desperate for sleep, I rarely bothered with the crib: infant Rachel fell asleep next to me nearly every night. Four subsequent children never used a crib at all.

Gradually, and almost imperceptibly, I’d morphed into a mother without boundaries; a woman who didn’t bat an eye when her spouse moved out of our bed and onto a mattress on the floor to make room for children.

It was only after my husband, David, was diagnosed with cancer in the summer of 2006 that I began reclaiming our relationship. During the eleven days he spent in the hospital after an invasive surgery, I visited daily, taking a leap of faith that my children could survive without me.

They did more than survive; they thrived under the watchful care of aunts who loved them. I became David’s caregiver during months of chemotherapy and radiation; cleaning his wounds, changing bloody dressings, preparing liquid tube feedings, and doling out medication.

In the process of taking care of his physical needs, I learned to love my spouse with the kind of selfless, giving love I had lavished on my infants and young children for so many years. In turn, David began encouraging what had until then been my only creative outlet outside of my mothering: my writing. With more time for writing, I became a happier mother and wife, one who gladly welcomed her spouse back into her bed.

For our 28th anniversary, we did something unprecedented in our marriage: going on an overnight trip without our children. We maintained our revitalized relationship by scheduling regular dates. And for five and a half wonderful years, David and I enjoyed what I could only imagine years before: a marriage that was a true partnership in every sense of the word. 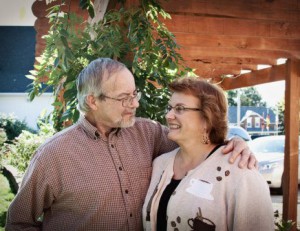 He likes me, he really likes me! Mary with her husband David, post-cancer.

And then, in an instant, my beloved was gone, dying in his sleep the day before his 61st birthday. Reeling with shock and incredible grief, I was all the more grateful for those last five years of committed spousal love and the attention I’d lavished on my husband.

It’s easy for me to say that if I could do it all over again, I’d have been a different kind of mother, one that would nurture her marriage above child-rearing from the beginning. Without hindsight, I’m not entirely sure that is true. What mother has not woken up at 3:00 a.m., wondering if something she is doing or not doing is harming her children for life? We mother partly from instinct, partly from learned survival. I did what I thought was best at the time, and by baby number four, I would have done anything for a good night’s sleep.

What, then, would I choose to do differently? To say I would have fewer children is to reject one of the eight that I love so deeply. Where would I have drawn the fine line between mothering and smothering? Earlier weaning? A bedroom that was off-limits to children? Insisting on a quiet time for mom each day? A weekly date night for Mom and Dad? Perhaps.

Or maybe it would have been as simple as closing and locking the bathroom door.

QUESTION: How do you balance the needs of your children with your own self-care? For those who are married, how do you prioritize your relationship with your spouse when your children demand constant attention?

CHALLENGE: Re-evaluate your boundaries with your children and how they impact your life as an individual and your marriage. Make changes if needed.

Edited by Sarah Monson and Rachel Nielson.
Image from Shutterstock/Graphics by Julie Finlayson.

Mary Potter Kenyon lives, and sleeps, in Manchester, Iowa, with three of her eight children. She graduated from the University of Northern Iowa with a B.A. in Psychology. Her book Chemo-Therapist: How Cancer Cured a Marriage (Familius, April 2014) chronicles the changes that transpired in Mary’s marital relationship as she learned to put her husband first during his cancer treatment. Refined By Fire: A Journey of Grief and Grace was released by Familius in October 2014. Mary & Me: A Lasting Link Through Ink will be released by Familius in the fall. You can find Mary's books ",a href="http://www.amazon.com/s/ref=nb_sb_noss?url=search-alias%3Dstripbooks&field-keywords=mary+potter+kenyon"target="_blank"> HERE" .