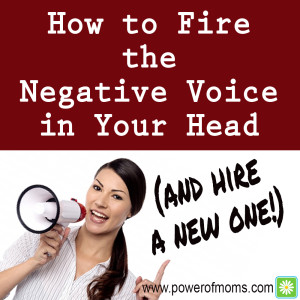 There is a voice in my head. And it is mean. It is critical.

It’s Simon Cowell, Donald Trump, and Gordon Ramsay all rolled into one. And I don’t like it.

It tells me I’d better call Nanny 911 before I ruin my kids. It tells me my post-twins belly looks like the Stay Puft Marshmallow Man. It tells me that Martha Stewart would have a panic attack in my front room.

It sounds like I’m on one of those reality TV shows where a judge—Simon, Donald, Gordon—is criticizing everything I do. All. Day. Long.

I can’t actually even watch those TV shows. They make me cry. I can’t stand to see someone get ripped apart by someone else’s harsh criticism.

So why do I let it happen inside my head?!

I’ve struggled with this for a long time. I even wrote about this five years ago (Be Kind to Yourself). It’s something that has been very hard for me. I’ve tried to change the way I think, and I’ve made some progress in the past, but it hasn’t stuck well enough.

However, my crazy imagination recently found something that seems to finally be making a difference. Rather than just trying to arbitrarily change the way that I’m thinking, I’ve actually given personalities to the voices in my head.

Okay, that only sounded mildly crazy. But stay with me—it’s going to be good.

I’m sure Simon Cowell is a very nice person. At least I like to think that he is. But I really don’t like him as a judge/critic. So I’ve decided that he is the voice in my head. It makes it so much easier to ignore!

For example, as I pulled on my yoga pants this morning, his voice said, “Puffy, puffy, puffy. Don’t even think about going out in public and letting that stomach be seen.” (Did you hear the British accent?)

And in my best Donald Trump voice, I said back to him, “You’re fired!”

Yeah, there was no way I was going to let that voice speak that way to me. It was just mean and I wasn’t having it. But I didn’t stop there.

It’s important that you don’t stop with just firing that awful voice. You’ve got to hire a new one!

I happen to have wonderful cheerleaders in my mom, my grandmother, and my sisters. The voice I ended up choosing to hire isn’t someone I know personally, though. In fact, she has already graduated from this life. But from all I’ve read about her, she was the kind of person that always left you feeling better about yourself. Her name was Marjorie Hinckley. And I hired her voice in my head.

In the book Glimpses into the Life and Heart of Marjorie Pay Hinckley, her daughter, Virginia, describes her voice: “Marjorie Hinckley has an amazing way of inspiring confidence in every encounter. To her each person is a constant source of wonder and awe—continually the object of her spontaneous exclamations: ‘I can’t believe how smart you are. I can’t believe how good you are! I can’t believe that you can really do that! Aren’t you something!’” (131). Doesn’t she sound like someone you’d like to know?

Now when I pull my yoga pants on in the morning, I hear her tell me: “Oh sweetie, you’re amazing! You’re going to that cardio dance class tonight, aren’t you? That’s fantastic! I’ll bet it’s so fun. And do you remember when you were pregnant with the twins? Wow, your body sure did some amazing stretching! And now look how far you’ve come!”

I like her. She focuses on the positive. She likes to remind me of the progress I am making and the successes I am having, no matter if they’re big or small. And her voice is so sweet!

This process takes a lot of work! Simon still loves to try to get his two cents in. But whenever I remember who that voice in my head is, I just fire him. And when Simon does try to jump in, I just think of Marjorie Hinckley, and I replace Simon’s negativism with the positive things I believe she would say.

So fire that negative voice, whomever it may be for you. Then find someone kinder, and hire them! I’d like to know who you choose . . .

QUESTION: Who or what does your negative voice sound like?

CHALLENGE: Think of a positive voice in your life whom you could “hire” to replace your negative thoughts. Give her or him a specific, familiar face and tone. Now put that voice to work this week!

*For more concrete strategies to combat the negative voice in your head, listen to this Power of Moms’ podcast: Unhealthy Stress or Habits? Break the Cycle!

Ann has the happy challenge of being the mom to a 22-year old daughter, a 20-year old son, and 4-year old twin boys. When she's not helping her older two navigate the turbulent waters of young adulthood, or helping her younger two navigate the jungle gym at the playground, she squeezes in a few minutes to write, record voice overs, or indulge her insatiable appetite for books. You can find more of her musings at Making It Lighter .