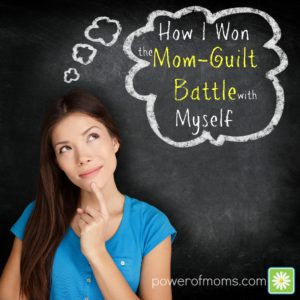 Several years ago I made a decision that changed the way I think about my daily choices. I banned one word from my vocabulary: should.  It’s a simple word. Most people use it frequently: I should call so-and-so. I should do laundry. I should exercise more.

So why did I get rid of it? For me, “should” is a dangerous word. “Should” carries a negative connotation that makes me immediately feel guilty for not innately wanting to do something I should do, or for not feeling a way that I should feel.

For years, I regularly argued with myself over everyday decisions. When I was still single, I would tell myself that I should be social at one party or another, even though I really just wanted to watch a chick-flick at home.  Feeling guilty, I’d go, but then I’d be cranky and want to leave. I’d tell myself that I should not be cranky because parties are supposed to be fun, and I’d feel bad all over again for not being a happier person. I would get stuck in a downward spiral of self-criticism as I struggled to meet the demands I’d given myself for the person I should be.

Before I banned this word from my vocabulary, I would tell myself that I shouldn’t be worried about something or that I should go help out a friend. “Should” made it a chore. Even when I was doing good things that could have been fun, if I acted only because I thought I should, I robbed myself of the joy of the accomplishment and focused on my negative emotions instead. No fun.  When I finally realized this and decided to make a change, I was shocked at how much altering my word choice altered how I thought about myself and my responsibilities.

I realized that there is no “should” or “should not.” There are things I need to do. There are feelings that will not make me happy if I dwell on them. But, there is no feeling I should or should not have.

Once I learned to acknowledge and accept my feelings as they came, I found I was able to cope with them better. Rather than tell myself, “This is dumb; I shouldn’t be stressed over this,” I rephrased it and thought: “Okay, I’m stressed. Why? What is in my control in this situation? What do I have to let go because it’s outside my control?”

All of a sudden (okay, maybe not suddenly, but definitely over time), I felt much less guilt for feelings like stress, anxiety, fear, doubt, and frustration. Instead of beating myself up, I have learned (at least more often) to step back, look at the situation, and act according to what really matters most without feeling guilty.

For example, yesterday I thought, “I should clean the kitchen, but I’m tired and I really want 20 minutes to myself after several hours of wrangling my adorable-but-extremely-exhausting boys.” If I say “should,” I feel guilty for not being a good homemaker, and I start feeling like a lazy blob of a person, despite all the other productive things I may have done that day. So I rephrased the idea in my mind. I told myself that the kitchen really needed to be cleaned, and if I dedicated a half hour to doing as much as I could, then I would reward myself by reading a book or whatever I wanted to do during the remainder of my children’s nap time. I knew I’d be happier relaxing when I’d gotten something productive done.

When I think this way, I still accomplish necessary tasks, and I avoid the guilt. I feel empowered by choosing to act instead of feeling enslaved by the many “shoulds” in my life.  Sometimes, I realize that I won’t be happier if I do that thing, and so I don’t do it. Awesome! Now I don’t have the obligation to do it, and I realize there’s no reason to feel guilty for not doing it.

There are a million things I can tell myself I should be doing (or doing better) in life.  But when I hear myself using that word, I let it be a reminder to me to rethink and rephrase. All the “shoulds” in the world don’t do me any good. So I’m trashing them.  Instead, I’m going to love who I am and where I am, and work from there to become better. Not because I should, but because I want to. It makes me happy.

Maybe I’m the only one who has gone through should-induced guilt. But I doubt it.  We as humans (and especially women) are often too hard on ourselves. So give yourself a break. Remove the word “should” from your vocabulary. Don’t do it because you feel like you should. But do it because you want to. And if you do, I bet you’ll be happier.

QUESTION: Are there words in your vocabulary that cause you to feel negatively?

CHALLENGE: Pay attention to how often you use the word “should.” Try replacing it with another word like “need” or just consciously allow yourself to let go of the guilt associated with it.

Megan Harr is a former middle school English teacher who traded teaching Shakespeare for exploring the world with her two little boys. In between potty training and making mud pies, she tries to squeeze in a little time to craft, cook, and relax with a good book. She writes about her daily quest to focus on the many little joys that come from being a mother on her blog, The Many Little Joys .