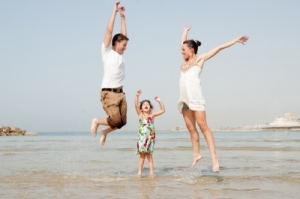 Let’s face it: Vacations aren’t all the fun and games that they used to be.

By “used to be,” I’m talking about back when I was a kid, and all I had to do was pack one small bag of personal activities and hop in the car when my dad called, “All Aboard!” All of the other arrangements were made by my mother, who worked for days to prepare us for a trip, and then worked every day during the trip, and then worked even harder after the trip to catch up on laundry and housework, paperwork, and all of her other work.

It doesn’t seem to matter whether it’s for an overnight or an extended stay; at some point leading up to a vacation, I tend to ask myself, “Is this trip really necessary?” I think of all the very productive things I might be able to accomplish with the time, if we just stayed home instead.

At the same time, I have to admit, trips are worth some amount of trouble. Family vacations can create stronger bonds between children and parents, and the memories last a lifetime (especially since we tend to digitally capture every single moment!). So my question is, how can we simplify the work of family vacations? How do you make sure that you enjoy the vacation as well? Has anyone had success in this area? Please share your wisdom now so that we can all better enjoy our upcoming summer travel!

QUESTION:  How do you make your family a vacation a vacation?

CHALLENGE: A few ways to really enjoy your vacation are by preparing ahead of time, planning in more free time, being in the moment, etc. Share with us your thoughts and ideas.