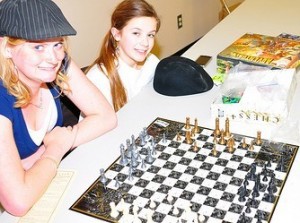 Photo by Zachary Wolf at www.flickr.com

I may be unique, but my memory seems to be much better at holding on to the hard times than the good ones. I lay down at night and I’m often hard pressed to think of the sweet moments from the day—even though I know they’re there: my brand new kindergartener curling up with me while I read on the bean bag, my three-year-old’s delight at my one-on-one, undivided attention, the baby lighting up when I walk in the room. Instead, I reflect on how grumpy the baby was at bedtime, the three-year-old’s potty training foibles, the number of times my kindergartener hurt his sisters.

But I’m most likely not. What’s far more probable is that I’m not taking enough time to establish a tradition of fun with my family, and when I am, I’m not working hard enough to keep that memory alive, to hold on to the magic.

My mother has excelled at this. I don’t picture her as the traditional “fun mom” who seems to enjoy playing more than her children do. I know we played together when I was little but by the time my sisters were old enough, they were always my playmates. But my mom always knew (and still knows!) how to bring our family together to enjoy ourselves—and she’s designed a number of those traditions to help us remember the fun times, big and small.

The Tradition of Fun

We grew up in the same city as my mother’s parents, brothers, sisters-in-law and nephews. While we saw my extended family regularly, my mother created several fun institutions to help us grow closer and enjoy our time together more. The first, I believe, was family game nights. A few times a year, we’d gather at my grandma’s house. One group would take over the dining room, another the living room, a third the family room. We kids would often play in a bedroom or in the breakfast nook. The adults pulled out the board games. When the grandkids were old enough to join in the adults’ games, it was a big day.

A few years later, my mother had the idea of monthly family dinners. (These were often followed with a few games as well.) Each household rotated hosting and cooking a meal on the first Sunday of the month. Even though most of the grandchildren are living on their own (about half of us out of state), this tradition continues to this day.

My mother also sought out family bonding opportunities for just our family. Martin Luther King Day became a family fun day (a movie or miniature golf, if it was warm enough). New Year’s Day was a day for movies (though I think we had more misses than hits with our choices!).

Holding on to the Magic

But it’s not enough just to build in all that fun, especially not for my mom. She also excels at making the fun times into memories we’ll carry with us. Whether it’s memorialized as an inside joke, a story we love to tell (or hate to hear), or a just a simple piece of paper, these events have become a collective consciousness for our family.

“Definelly the tea cups!” is how my preschool-aged sister described her favorite ride at Disneyland. (She’ll be twenty this month.) We remember this not just because it’s adorable, but because my mother wrote it down. We had various traditions for this: My mother kept journals for herself and for each of us. Several years running, we wrote a family Christmas letter to ourselves, to be read the following year. We all scrapbooked at some point (though admitting this makes me feel I’ve stepped into the 12-step territory).

But probably the most unique tradition began a little more recently. My mother had a Werther’s tin which she dedicated to collecting the little scraps of paper that marked how we spent our year (http://www.waywardgirlscrafts.com/2011/07/memories-and-predictions-traditions.html). On New Year’s Day, before the movie and a game night at Grandma’s, the family gathers in our living room, and we pass the tin around. We draw out a scrap of paper: a receipt. A program. A ticket stub. A playbill. A napkin. Sometimes there’s a handwritten note: “eating out to celebrate Dad’s raise.” “Jordan and the kids were here.” “It was terrible!” Other times, the meaning and the memories are obvious.

This year, I’m sure my mother will have ticket stubs from a dolphin tour, and they’ll reminisce how my son was thrilled at riding on the waves at the prow of the boat—especially when a huge wave soaked the entire vessel. They’ll pull out a receipt for a week’s worth of groceries from a Food Lion at the beach and remember what we each made for dinners at the beach house. They’ll find a ticket stub from a trip to the movies with my dad, husband, brother-in-law and two oldest kids. They might even have a receipt from the so-so Calabash style seafood restaurant, or a goat with a wedding veil or top hat, the topper to my parents’ surprise 30th anniversary cake (another fun story). Even though we probably won’t be there for this ceremony, we’ll be there in spirit as they reminisce about the fun times.

Obviously, we all still have hard times and challenges on a daily basis. Family get togethers sometimes end in family feuds. But, when we make an effort to knit our hearts together, especially through creating wholesome, fun memories together and through preserving and recalling those memories, our families become stronger by the second.

Questions: How do you hold on to your good memories? How do you work to bring your family closer together? What kind of fun activities stay with you the longest?

Challenge: Create a memory box for this year, or find one to use for next year.

Jordan McCollum has three children, knows three languages and plays three instruments--and she'd like to add more to all of those counts someday. When she isn't raising her children and running her household, Jordan writes about finding fulfillment in motherhood at MamaBlogga as well as award-winning fiction. A native of North Carolina, she makes her home with her family in Utah Valley.