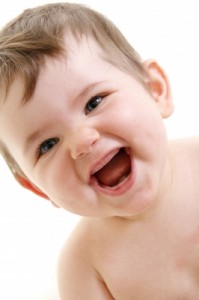 Photo by Clare Bloomfield at www.freedigitalphotos.net

I was watching old family videos the other day, and found one that made me feel a little guilty. Natalie had just started to giggle and I was doing all sorts of silly things to make her laugh for the camera. Luke was nearby trying to get in on the action. I doubt anyone else would even notice, but I could see it plainly. It was in the tightness of my smile and the way I was holding my shoulders…Luke was bugging me. I’m sure I thought he was too loud and rambunctious, and was wishing he would go play for a minute so I could get this video of Natalie.

But watching it now, almost two years later, all I could think about was how cute and little he was. He still talked like a baby, he was trying to keep the blanket on Natalie so she wouldn’t be “told” (cold). He was still a baby himself really. I don’t know that I gave him enough credit for that after Natalie was born. It’s strange how your baby is no longer a baby once another one comes along. And so I felt guilty…guilty that I didn’t enjoy him more, that maybe I was too hard on him. And then I decided to snap out of it and look forward. What are the things in my life that I dwell on too much, that I allow to annoy me or frustrate me, and how will I feel about them two, four, ten years later? Will time soften their edges, will I miss them someday?

I think one of the truest cliches is, “The grass is always greener on the other side of the fence.” As humans, we always tend to think that what we don’t have or may have someday, is better than what we have now.

I remember reading about a friend’s frustration on her blog once. She has a young son with Down’s syndrome and was talking about how difficult it was that he couldn’t talk yet. Having a saucy, overally-verbal two year old at the time, I thought, “Well, at least he can’t call you an idiot (thank you Disney movies) or tell you he hates you!” And then I mentally slapped myself and thought, “Wow, how lucky am I, that my son can talk and tell me how’s he feeling?”

And then there was this past weekend. My kids were yelling and running around and I was at the end of my rope, wishing for a little peace and quiet. There was a knock at my door. A man was passing out fliers of a missing teenage boy, gone for a week. Would I check any sheds or trailers on my property to see if he was there?

Suddenly those kids were no longer a burden, because you know what, at least they were there. I could still hug and kiss them and tell them I love them. I found out recently that the missing boy was back home. I’m so glad; I can’t imagine what his parents were feeling.

So, I guess the point is that I’ve realized how important it is to appreciate what you have when you have it. Even when times are hard, there’s always something to be grateful for and you never know what you’ll miss once it’s gone.

QUESTION: Throughout your day, when you feel frustrated about something, ask yourself: “In five or ten years, how might I view this situation?  Is there anything I might actually miss about it?”

CHALLENGE: Try to view your challenges in a new light and feel thankful for even a small part of it.