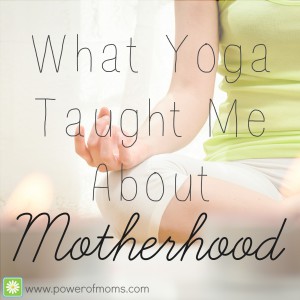 You should know straight off that I’m not a yoga person. I like it. I do. But the sensation I hate more than anything else in the world is the fiery, fibers-slowly-ripping feeling of a stretching hamstring. And in yoga, a tight hamstring is not tolerated. It’s worked on.

I came to yoga through Bikram—a modern, aerobics style of yoga. Turn up the heat, lift up the floodgates of your sweat glands and start counting. You only need to suffer each pose for 60 seconds. I like the concreteness of that—the athleticism, the sprint to the finish. But then a friend of mine was getting certified to teach Iynegar yoga and she needed volunteers to take her class. Being a sucker for anything free, I signed up.

Iyengar is not a modern practice. There is no counting. There is no tightening. Sometimes no sweating. But there is plenty of stillness, the kind of stillness you have to knock out and drag into being. Some afternoons we would spend 30 excruciating minutes in one pose–Downward Dog. That’s a lot of hamstring pulling. My friend kept trying to explain that each pose needed to be developed. You can’t rush through a pose just to do it and expect to get the real benefits. Each pose had a core, an essence that, like a flower, had to be opened with time and gentle pressure, not force.

I find myself impatient when I’m trying to hold a pose. Inevitably my nose itches relentlessly or a spot on the left side of my forehead, somewhere near my part. And I yawn. Yawns wash over me like rogue waves when I’m trying to breathe rhythmically. This is to say nothing of my hamstrings and other major muscles that just refuse to open and relax, no matter what I do.

But there I was every Tuesday and Thursday, trying to sink deeper into Triangle pose, working to extend my Half Moon pose, wishing to unravel my hamstrings in Downward Dog. Why? Because it was free. And because I liked the idea of wrestling with a pose. I liked not doing a half-way job for 60 seconds and then moving on to the next thing. I wanted, desperately, to peel back the pose to its core.

Lately I’ve been wondering: what if this philosophy could be applied to everything? What if, by holding onto the very thing we are itching to let go of, or by letting ourselves sink deeper into something that is already boring us, we could reach a core, a center, an essence?

This metaphor seems easy to apply to the grandiose things of life—marriage, parenting, art—and dangerous to apply to the destructive things of life—abusive relationships, heroine, bad TV. But what about the seemingly mundane things of life? What if laundry has a core I have to discover? Or the book I’m reading? Or the conversation I’m having with you? What if I devote my whole self to something when it seems like 60 seconds of my energy will be just fine?

So today I tried an experiment. I tried to hold the pose while having a tea party with my daughter, Mae. I felt the familiar tug of responsibility (shouldn’t you fold the laundry right now?), of boredom (yadda, yadda, drink tea, drink tea), of distraction (what should I have for lunch?), of the future (I should really email Lauren about next Friday), of pain (geesh, my back’s starting to hurt)–just about every sensation that usually makes me give up 30 seconds into any pose. But I did what my yoga teacher always says to do: I took a deep breath and tried to deepen. I redoubled my efforts to drink tea politely. I searched for more engaging conversation topics. And I forced my eyes, and mind, to focus on Mae.

Wouldn’t it be nice if I could say that I reached a new plane of enlightened tea parties or that Mae and I spent the rest of the afternoon in imagination rapture? T’was not the case.

But I felt something, something deep inside me begin to loosen, relax, extend, and I want to sink deeper into that.

QUESTION: What distracts you from “holding the pose” during your interactions with your kids? How can you overcome those distractions?

CHALLENGE: This week identify three small moments where you can give motherhood your full attention.