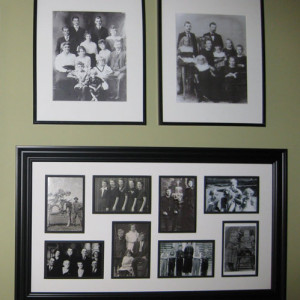 This year, I’ve been really delved into the stories of my grandmothers. Most of them I never knew but their stories find me and bind me to their heroic lives. In addition I’m thinking of the lives of the mothers I get to call my daughters.

There are some days when mothering is about as fun as traveling at eighty miles an hour on a blistering hot day on a motorcycle with no windshield in a bug storm!

But let’s step back a moment, take ourselves out of the here-and-now and look at the big picture. Mothering isn’t just about where we are in our mothering career at the moment; it’s about where we came from and where we are going. In order to know who we really are, we need to look at the whole spectrum of the mothers in our lives.

Last year I had a spectacular “aha moment” as I began thinking about the mothers in my life. Not just my own mother who has been an enormous influence for good on me but also my grandmothers and great grandmothers. I am part of them and they are part of me.

My moment came as I was walking through a glorious field of bluebells on a spring day in England in an old 100 acre-wood near a quaint little village in England called ­­­­­­Little Baddow. It happened to be my birthday and I was there with two of our daughters, both stellar mothers themselves, and two grandchildren. Little Baddow is where my great-great grandmother Elizabeth Gower was born and raised.

Elizabeth must surely have walked through this very bluebell field in her childhood. It was an ethereal experience to contemplate the currents of her long-ago life and of my own life as we three mothers came back to the flower grove of this stalwart grandmother.

(Below is an original oil painting by my dear friend Bobbi Snow from a photograph I took that day.)

Elizabeth and her husband Daniel Clark were the first to join our church with their family of ten children and were so bitterly persecuted for that choice that they decided to immigrate to America. After a hard sea voyage, they crossed the plains in covered wagons. During the journey, Daniel drank some bad water from the river, contracted cholera, died and is buried somewhere along the Platte River in Nebraska. Valiant Elizabeth forged on to Salt Lake City with the children. I can only imagine the vivid details of her difficult life—details of hardship which in the end defined her and helped define me. Though I never knew her, her valiant blood runs in my veins.

There are other stories of my gaggle of faithful grandmothers that boggle my mind. One, after giving birth to ten children and living a faithful life, died in the horrendous flu epidemic in 1920 when she was 38, leaving eight children including my mother and taking her two sick babies aged three and eighteen months with her to Heaven in the same week. Another pioneer grandmother helped settle Bear Lake Valley and saw that a community recreation hall and a road to the gorgeous Bloomington Lake was built. And another lost five of her six children as she immigrated from Denmark to America. My own mother wasn’t able to have children until she was 42 and felt so blessed to be able to bring me and my sister into the world. Although her family was smaller than she envisioned and her husband’s small farm never quite did well, she was able to bring in needed money and influence the lives of hundreds of children as she taught school and piano lessons all her life. The stories of the difficulties of their lives and their perseverance is nothing short of awe-inspiring.

Now that our children have flown the nest, I love thinking about those great mothers who have made me and those who will become great mothers because of their sacrifices. That includes of our own four daughters and four daughters-in-law who are producing the generations to come.

They have their own sets of hardships. One has a child with a syndrome that may cause the loss of her eyesight before she is an adolescent. Another lived with our son in a 450-square-foot apartment in New York City with three children—the baby sleeping in a drawer. One had five children in just five years and dealt with some crazy times with so many preschoolers while another wasn’t able to have her first child until age 38. A couple of them are dealing with uncharted and challenging territory with their teenagers. Another valiant soul delivered their first child completely naturally…. breech! Still another is a pioneer in her own right as she and her family (four children) have decided to “go green” at their home in Hawaii. They have “grow boxes” full of vegetables, a yard full of chickens, and live on about $200 a month for food while driving beat up old cars that run on vegetable oil.

None of it is easy—not in the past or in the present. Yes, there are beautiful moments of love and peace and tranquility and gratitude, but the hard moments often outnumber the lovely ones. The important thing is to keep in mind that the difficulties in our lives are the things that help us to grow and change and learn. As we look at the big picture, these hard times of motherhood create a family narrative that will give future generations strength and resilience to go on in the face of their own hardships.

One of our long-standing family’s mantras was probably inspired by our grandmothers shouting down from heaven, “Hard is Good!”

CHALLENGE:  Take a few minutes to dig up and/or write out some stories about your family’s heritage and share them with your children during Memorial Day weekend.