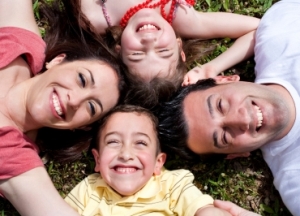 Remember how we all thought we were fat in high school? If not fat, we didn’t like our hair/skin/clothes or the junky car our parents made us drive. Last night I found pictures from my sophomore year. Instead of wrinkles, my face had freckles. Instead of stretch marks and cellulite, I had muscles and a tan. I wanted to reach into the picture and shake my 15-year-old self, screaming, What is your problem?  Be happy with what you have!

Isn’t it funny how we tell our 15-year-old self or our three-year-old son to do something that we struggle with ourselves?

When my dad was in his early forties, his life was full.  He worked for the U.S. Government as a Chemical Engineer.  In fact, he was distinguished by the U.S. Department of Defense for being recognized as a leading expert in Nuclear, Biological, and Chemical Warfare Defense.  He had a comfortable salary, a new house, and a nice car. I remember my parents had just paid off their student loans and finally money wasn’t quite as tight. Then he got sick.  He collapsed from a heart attack in LAX one morning and life changed. Instead of playing tennis, he was on dialysis. The career he had built was too high-stress and no longer an option.

About a year after his initial heart attack, he started applying for other jobs.  In secret, I wondered why he bothered; he couldn’t drive and was still somewhat handicapped.  A job opportunity soon appeared and he began working at a call center for JCPenney.  He took the bus or local transit to get to and from work.  When that job ended he worked from home for an insurance company, calling businesses all day to create new leads.  Throughout the 13 years he was sick, he worked between two kidney transplants, thrice weekly dialysis, multiple surgeries, and spontaneous visits to the emergency room.  During those 13 years I never once heard him complain.

I remember asking him if he hated working in places where he was grossly overqualified.  His response was, “I’m just glad to be alive.”  When he passed away in May, I found a lot of solace knowing my dad was always happy with what he had.  Even though what he had was awful sometimes. Even though one day he had it all and the next day everything changed.  When he was an engineer, he was happy to be an engineer.  When he made calls for an insurance company, he was happy to be making calls.  Even when he was in the hospital for days or weeks, I remember him telling me the food was pretty good.

I think of him a lot, especially during hard days. You know those days when you assume it’s probably dinner time then you look at the clock and it’s only 3 pm?  I wonder how he didn’t waste time wishing his situation away.  His days were not spent in self-pity.  Thank goodness he didn’t get caught up in comparing his life to others’ or measuring his problems to others’.  Unlike my three-year-old, he was happy with the toy he was playing with.  I want that, too.

I want to feel content even when my house is a mess.  I want to feel grateful for the roof over my head and the food in my fridge (even if all we have right now is mustard, eggs and a few tortillas).  My husband works long hours, but instead of feeling lonely or overwhelmed, I want to be happy he has a job.  I want to feel joy with or without money in my bank account.  When I miss my dad, I want to remember the full life he led and the joy he found during his darkest days.

And finally, even as I type this, my soft belly hangs over my jeans (pajama pants) and the skin under my arms is not as firm as it used to be (it hangs).  However, I am healthy and alive, and that awesome belly is the reason I have two sleeping boys in the next room.  Happy with what I have.

QUESTION:  When was the last time you offered thanks for all you have?

CHALLENGE: The next time you find yourself complaining about your situation, your children, your body, your house, your work, etc., consider how you can be happy with what you have.

Holly Wever is the oldest of four kids and will tell anyone but her mom that she basically raised her three siblings. She graduated from Brigham Young University in 2003 with a B.A. in English teaching and earned a master's degree in educational leadership from UNLV in 2007. She taught middle and high school English for four years before becoming a full-time mom. She's been married to her husband Tod for seven years and they have two little boys together: Lennon (3) and Larry (1). She tries to run marathons and triathlons although her goal is usually not to come in last. She loves baking cookies and then eating them and wants to scuba dive in Hawaii and Belize someday. She's been blogging for 3 1/2 years about life, marriage and motherhood and says it helps her vent more than anything: My Three Sons.