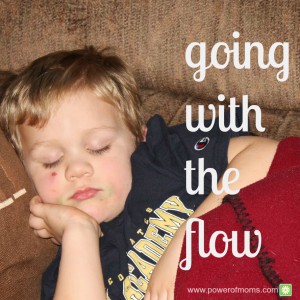 We had planned this for months: A night getaway, just my husband and I, to celebrate our anniversary. We had a wonderful babysitter to spend the early afternoon AND night with our kids, as we were going to go into town early to do a little shopping.

I made dinner reservations at the hot new restaurant in town, one that you had to call way in advance. We booked hotel reservations at a wonderful hotel and paid in advance for a champagne brunch the next day. I bought a new dress to wear to dinner. My husband and I were so excited to get away for the night.

Saturday morning started like most mornings. My husband took one son to his soccer game. I took the other three kids to the opening-day festivities for another son’s baseball team. There was a parade and lots of fun things for kids to do during the games— bouncy houses, cotton candy, etc.

I got my son settled with his team and pulled out chairs for our other two kids to watch the parade. My three-year-old started whining, “I want to go home!”

He threw his snack on the ground.

I was getting agitated, but not too agitated, knowing that I had a fun night in store.

We then started to watch baseball games. My little guy kept complaining–he really wanted to go home. He knocked over my chair, pushed his sister, and was just being generally fussy. My mommy gut started saying, “I wonder if he is getting sick. He is really not acting like himself.”

Sigh. I left my baseball player with a friend’s mom and went home.

We sat on the couch. My little guy crawled onto my lap. He was warm. Really, really warm.

I took a deep breath. Took his temperature. Hoping he was just warm from being outside in the sun. “I have my night tonight!” I thought, ”This can’t be happening!!”

Sure enough, he had a fever.

I looked at his little face. He was pale. His eyes were watery. His nose was running. He said, “Just hold me, Mommy. I no feel good.”

What do you do when your best-laid plans don’t work out ?

You go with the flow.

I held my little guy on my chest. I took deep breaths. I reminded myself, “This is where I am supposed to be.” I let him fall asleep.

I called my husband. We cancelled the hotel, cancelled the fancy dinner. I called my sitter to cancel, and she could sense the tinge of sadness in my voice, so she said, “I will come over for a little while. Just go grab a quick bite to eat to celebrate your anniversary.”

“Ok,” I thought. My little guy was asleep by now on the couch.

So, my husband and I went to the local taco joint. We had chips and salsa, drank margaritas, and watched a little basketball. We came home after about an hour, and I spent the night with a coughing, feverish child on top of me.

While the taco joint was not the fancy restaurant, and my shorts, t-shirt and baseball hat (because I did not have time to change) were not my fancy dress, we made the most of our anniversary.

Because don’t we, as moms, learn how to go with the flow? Circumstances change. Things happen. There will always be another night to go out.

But that night, I was right where I was supposed to be.

QUESTION: When was the last time things didn’t go as you planned? How did you react?

CHALLENGE: Take a few minutes to journal about that experience. What did you do well and what would you do differently the next time things don’t go according to plan?

Edited by Aubrey Degn and Rachel Nielson.
Image from author with graphics by Anna Jenkins.

Rachel is a wife, mother of four great kids, science nerd, avid reader, slow runner and disco fanatic. Rachel blogs at Winter Party of Six where she tries to journal about the little things, because she realizes that one day those are the big things.