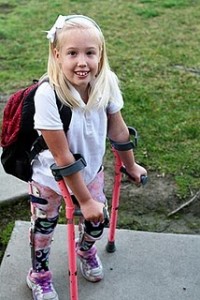 On Valentine’s Day 2003, we learned via ultrasound that our first born child, a baby girl, would be born with Spina Bifida. The doctors explained that she might not even survive birth and if she did, she could possibly have multiple disabilities. In fact, at one OB appointment, when were reviewing the results of a test, my husband said something along the lines of, “Isn’t it a positive thing that it occurred lower on her back rather than higher?” I will never forget the look on my doctor’s face and what she said next. She stopped, looked up at us and said: “DON’T YOU GET IT? GOD DID NOT DEAL YOU A GOOD HAND!”

I could hardly speak after she said those words, words that I knew were not true. I will never forget the feeling of holding Katie for the first time. My dreams of becoming a mother had come true! I felt like I was prepared for the birth of Katie and what was to come, but no one could prepare me for the love that I have for her. I feel so blessed to be Katie’s mother. I find it a privilege of living with a miracle. It has now been ten years since that day I held Katie in my arms for the first time. I always say that motherhood can be a roller coaster of emotions and sometimes that ride can start from day one.

Four hours after Katie was born she had her first surgery, with many more to come. Within three short years she was walking with the help of braces and a walker, a task that we had been told would be impossible. I will never say that this is an easy road to go down, but if you have to go down it, it can be a beautiful journey.

We do have hard days, some harder than others. I would never wish for anyone to experience having to hand your child over to a doctor as he takes her away to the operating room. We have had to do that a handful of times and each time is just as hard as the first: at 14 months, when she went in for hip and pelvis surgery, leaving her in a body cast for 3 months; again at 18 months when they placed a shunt in her head to help drain the excess spinal fluid that was building up on her brain (that was the hardest and most scariest time of my life); and last, a surgery to remove the hardware from her hips and at the same time a minor surgery on her ankle.

These past ten years have been life changing to say the least. We have spent many hours with doctors and therapists and in doing so have met some amazing people with courageous stories themselves. We have been put in a world that not all get to experience, a world where patience is tested, where miracles are witnessed, and strength is gained. To the doctor that said, “God did not deal you a good hand,” my response will forever be: “No, He dealt me a GREAT hand.”

QUESTION: Have you ever had a challenge that turned into something wonderful?

CHALLENGE: Next time you feel like things are going terribly wrong in some aspect of your life, consider the idea that things might turn out much better than you expect.